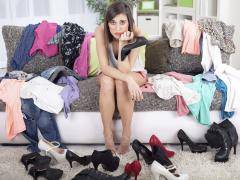 Armagh women have adopted a ‘wear it once culture’ when it comes to their wardrobes.

And they only wear items a handful of times before considering them ‘old’, according to a study carried out by the children’s charity Barnardo’s, which runs a shop on Scotch Street in Armagh.

The detailed survey of women aged over 16 into women’s fashion habits in the UK, found the majority of fashion purchases by women see the light of day just seven times.

The survey also found the average woman typically spends £70 per month, or £847 per year on clothes, yet most of these are left unworn in wardrobes, while a fifth pretend to have worn something a few times when really it’s a new purchase.

The poll also found that women in Northern Ireland harbour the most guilt about their clothing habits, with nearly two thirds (61 per cent) admitting to feeling bad for wearing an item of clothing just once.

The study was carried out as part of the charity’s #MyBarnardosDonation campaign to encourage women to donate unworn items to its stores, in the hope it will generate over £100,000 worth of clothing donations to support the children Barnardo’s works with across Northern Ireland. Fashion dilemma? Barnardo’s is appealing for donations of unused and unwanted clothing.

Barnardo’s Armagh Store Manager Jackie McArdle said: “We’re all guilty of wearing an outfit a few times and then forgetting about it, but we were surprised to find the average woman’s wardrobe has at least seven items that will never be worn again.

“That’s why we’ve launched the #MyBarnardosDonation campaign to encourage women to donate their unworn items. We’re asking people to put aside an hour to sort through their wardrobe and put those items they no longer wear to good use by donating them to the Armagh Barnardo’s store.

“One hundred per cent of the profit from Barnardo’s shops goes towards the charity’s work in Northern Ireland transforming the lives of the most vulnerable and disadvantaged children and young people.”