Broadband voucher scheme ‘must be extended to Armagh’ 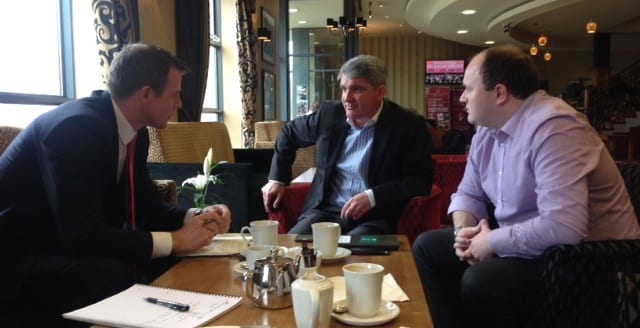 There have been calls today for the Stormont Executive to ensure businesses in Armagh can avail of a vital broadband voucher scheme which is worth up to £3000 to each of them.

But the availability should be extended to the Newry and Armagh area, particularly as large parts of South Armagh are being affected by ongoing broadband connection difficulties.

The call for the voucher scheme extension has been made by SDLP Westminster candidate Justin McNulty, who has met with broadband providers this week.

He said: “Businesses in rural Armagh are continuously being failed by the lack of broadband services and the Stormont Executive is sitting ignoring this area time and time again by not including Newry and South Armagh in a vital UK government backed voucher scheme.

“The scheme, which is backed by the Department of Culture, Media and Sport in London, would allow small and medium sized businesses to avail of £3000 towards the cost of upgrading their broadband connection, and yet only two council areas in Northern Ireland can avail of the scheme, those being Belfast and Derry.

“This is nonsense. The grant is available to businesses that operate in areas where the infrastructure already exists. This should be made available to all council areas and, in particular, those who cover border regions where the broadband connectivity is a nightmare.

“I firmly believe the continued lack of real action, rather than one off gimmicks, is costing vital jobs locally.

“We could see small businesses popping up all over the area if the broadband problems were resolved. We could see more people working from home and avoiding the traffic nightmares of our cities. Farmers and businesses could avail of vital online services if Stormont could only get its act together. This is not rocket science, it’s common sense.

“I am very publicly calling on the Department of Enterprise to urgently review this voucher scheme. It can and must be widened up to all council areas to avail of the scheme.

“The businesses of this area are crying out for decent, reliable and fast broadband. This is one way of helping it to be delivered if we can force the department and the Minister to act.

“I and my colleagues have written to Arlene Foster seeking urgent action on this very important issue for our rural economy.”