The Bessbrook bricklayer was freed on bail after he appeared in court accused of having cannabis and criminal cash worth almost £200,000 on Sunday 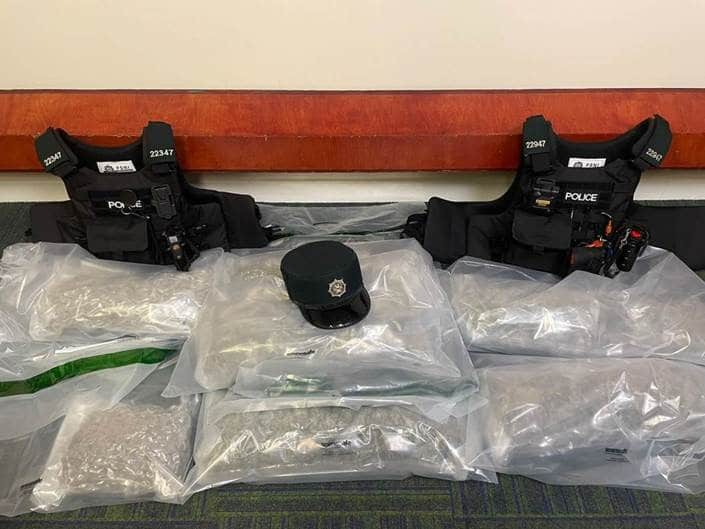 A Co Armagh bricklayer appeared in court today (Monday) accused of having cannabis and criminal cash worth almost £200,000.

Lisburn Magistrates’ Court heard that 40-year-old Stephen Connell was “babysitting” the cash and nine kilos of herbal cannabis in order to repay a debt, having borrowed money from “sinister elements”.

Connell, from Cloughreagh Park in Bessbrook, appeared at court by videolink from police custody, confirming that he understood the six charges against him including three drug offences and three criminal property allegations.

Giving evidence during a contested bail application, a police officer outlined how police searched two properties in Bessbrook, firstly Connell’s home and the home of his late parents in Oakview Close.

In a van parked outside Connell’s home, police seized nine kilos of “harvested cannabis leaves in bags, estimated to have a street value of £100,000”, said the officer, adding that in a second van parked in the driveway of the other property, they found £50-80,000 in cash.

In addition, a quantity of “high value watches” were uncovered at the Cloughreagh Park address although he admitted that their value “could be debatable”.

Arrested and cautioned, Connell “made some significant statements about possible money problems involving people from Dublin”, and during later police interviews, he gave a prepared statement claiming he had borrowed money “not through regular means…and that’s where it all started and he has been put into possession of all this stuff for someone else”.

Objecting to bail, the officer said police feared further offences could be committed as the seizures are a “significant loss”, there was also the “risk of harm to the community” in the sale and supply of drugs plus “there’s a risk of harm to the defendant himself in terms of who he owes money to”.

“We don’t know who he owes the money and drugs to and we don’t know what risk him being present at home will be for his family,” concluded the officer.

Defence counsel Kevin Magill revealed that building contractor Connell was owed £400,000 by a customer, which still remains unpaid, so he had borrowed money from “sinister elements and that has put him under pressure”.

“There’s no paraphernalia to support contention that he is an actual dealer,” the barrister submitted, and suggested that, given his admissions at interview, “clearly it could be dealt with under the indictable cases progress” to be fast tracked.

Arguing that whoever owned the cash and cannabis were hugely unlikely to use Connell again given he was now “on the police radar”, Mr Magill further argued that the bricklayer “is an appropriate candidate for bail with stringent conditions”.

“We are talking about substantial sums of money and a substantial amount of drugs,” said District Judge Eamon King. “These are serious matters and he will have to live with the consequences of becoming involved and that could result in a possible custodial sentence.”

He said it was of “particular relevance” that Connell has four children, any of whom “could be a customer for people peddling drugs”.

Freeing Connell on his own bail of £2,500 with a further £2,500 cash surety to be lodged with the court, DJ King ordered the defendant to surrender his passport and report to the police three times per week.

The case was adjourned until May 18.