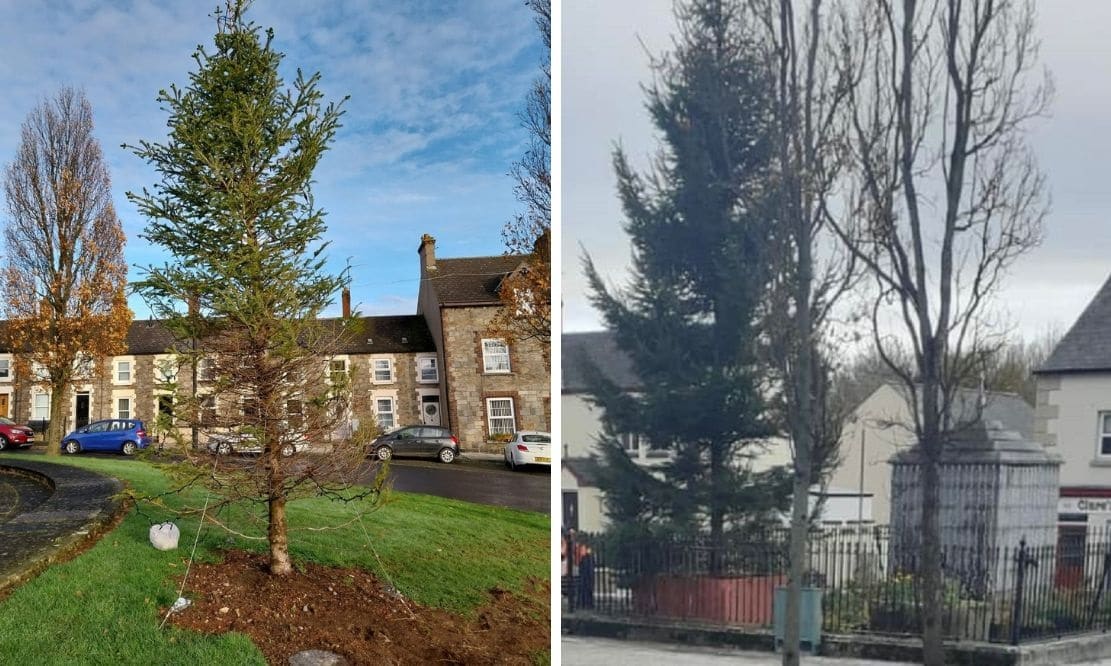 Bessbrook's Christmas tree before and after. Photos courtesy of Newry's Lisdrumgullion News and Cllr David Taylor

The residents of one County Armagh village have finally received a new Christmas tree, following outrage at the previous tree’s condition, a councillor has said.

UUP Councillor David Taylor announced this morning that he had received confirmation that the village of Bessbrook was to get a new Christmas tree in time for the Christmas lights switch-on tomorrow, after residents hit out at the condition of the old tree, comparing it to the superior trees provided to neighbouring villages.

The new tree arrived in Bessbrook this afternoon and is set to be decorated later tonight.

The old tree, which was in noticeably poor condition, was the subject of frustration within the village, with Councillor Taylor receiving a number of queries from concerned residents.

Speaking to Armagh I, Councillor Taylor said that the old tree was intended to be a sustainable Christmas tree, but that it was acknowledged that the tree was in “very poor” condition.

“There were very strong feelings on the issue, there’s no doubt about that,” he said. “The news on the tree’s condition spread even beyond the village and there were obviously concerns. I don’t think people could believe that what was in place at the minute, would be what would be considered to be the Christmas tree for Bessbrook.”

He said that he had been engaging with officials in recent days. and had raised the issue of the tree last week in a meeting of the Sustainable Environment Committee at Newry, Mourne and Down District Council.

“I’ve received confirmation this morning that a new tree will be provided ahead of the light switch-on tomorrow night. That’s very good news because a lot of concerns were raised”, Councillor Taylor said this morning.

He explained that the tree was part of a sustainable environment project for Christmas trees, in which trees were planted across the district, but that the tree in Bessbrook “hasn’t flourished in a way that council would have hoped”.

“That’s where the concern lies because the tree just hasn’t flourished and hasn’t been what you would expect of a Christmas tree. So that’s why there has been a need to get a new tree in place.”

Councillor Taylor added that the news has been welcomed in the village.

“The council has provided new lights for the village this year as well, and certainly that’s good news also, but I think, given the fact that the tree was in such a poor condition, that took away from that.

“It’s important for people in the village that we have provisions that everybody can enjoy and be proud of. It’s important that the council have reflected on that and delivered a new tree to make sure that people are in a position to enjoy what’s in place in the village.”

Armagh I has contacted Newry, Mourne and Down District Council for comment.