The 13-year-old Camlough schoolboy said: 'My Mum and Dad have a simple motto in life ‘Always do good when you get the chance'. So this got me thinking, what can I do? Well I can sing!' 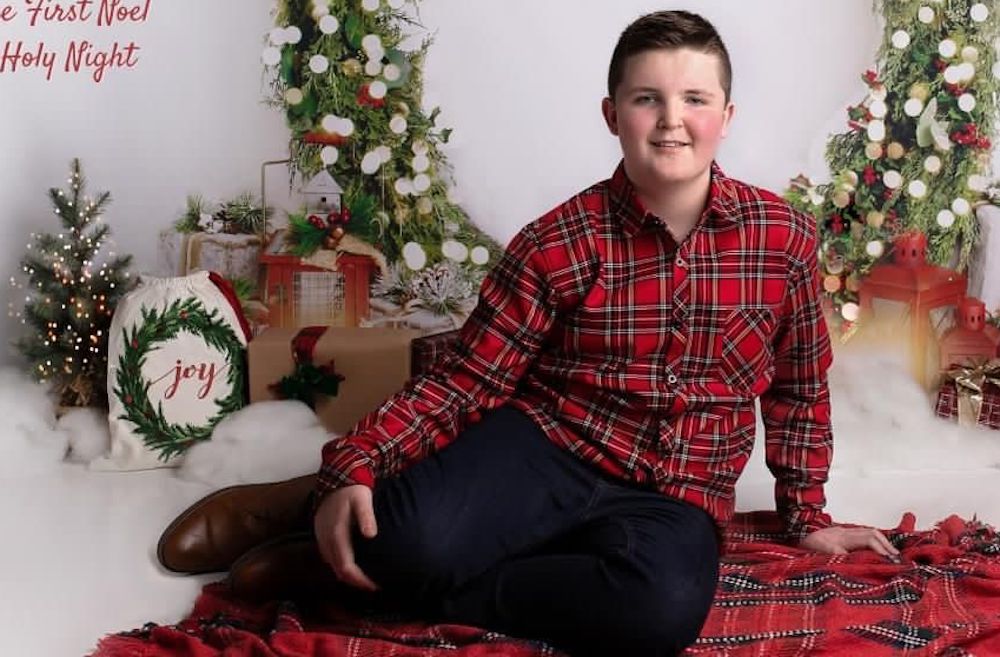 A young south Armagh singer has released a charity CD to raise money as a thank-you for the Mandeville Cancer Unit in Craigavon for all they did for his family after his dad was diagnosed with cancer.

Conor Sands was only three when dad Niall was told he had cancer, but despite his tender years remembers a wave of change in his home when he first became gravely ill.

The now 13-year-old has memories of those days and the help and support given to his family.

Conor, a pupil at St Paul’s High School in Bessbroook, said: “I recall my father regularly travelling to the Mandeville Unit for his chemotherapy, or his ‘dose of jungle juice’ as I described it.”

His Christmas CD – entitled ‘A Gift of Hope’ – is his way of showing the gratitude of he and his family for the staff of the Craigavon-based cancer unit.

It features eight seasonal classics, including Away in a Manger, O Come All Ye Faithful, Silent Night and We Three Kings, all beautifully sung by this remarkably talented young man.

Conor is the youngest of four children to Niall and Joanne Sands, from Camlough.

He explained: “As a child I recall myself and my sisters Ciara and Seana and elder brother Eoin having to stay with family and friends whilst my Mum juggled her worklife as a nurse, running a home, looking after a young family, taking us to our after-school activities and seeing to Dad.

“I first heard of the Mandeville Unit 10 years ago this Christmas when my father Niall was diagnosed with cancer.

“I recall my father regularly travelling to the Mandeville Unit for his chemotherapy, or his ‘dose of jungle juice’ as I described it.

“The Mandeville Unit is one of the four regional chemotherapy centres in Northern Ireland. Based at Craigavon Area Hospital, it facilitates the outpatients’ delivery of chemotherapy and supportive therapies for patients who have been diagnosed with cancer.

“More than 26 people in Northern Ireland are diagnosed with cancer every day.”

The young Bessbrook student has been gaining quite a name for himself in local musical and drama circles.

Talking about his love for entertaining, Conor added: “Life wasn’t easy, but my Mum made sure we didn’t miss out. It was from that very young age that I developed a love for singing and performing arts.

“I have had the privilege of performing in many shows from Broadway Musicals, to the up and coming premiere production of ‘Matlida Jr’.”

Conor would be the first to say that it was his Dad’s incredible faith and the fantastic care and support of the staff at the Mandeville Unit that gave them ‘Hope’.

Now 10 years on from his Dad’s first diagnosis, Conor wishes to show his gratitude to all at Mandeville Unit for their professional care and life-saving services.

Praising the Mandeville Unit, he said: “Not only did the Mandeville Unit look after my Dad, but they gave great support to us as a family and we will be forever indebted to them for their specialised care and support we received during the challenges and fears we as family faced with Dad’s cancer diagnosis.

“My Mum and Dad have a simple motto in life ‘Always do good when you get the chance’.

“So this got me thinking, what can I do? Well I can sing! So I mentioned it to my Mum and before I knew it, I was recording my own Christmas Album and befittingly called it ‘A Gift of Hope’.”

The CD will be launched this Wednesday, December 1, with all proceeds going to the Mandeville Unit, Craigavon.

Conor has been overwhelmed by the generosity of support to help put his CD together and would like to thank Fiona Flynn, of Flynn Performing Arts, Danny O’Neill, Accompanist, Pat McCaul, Take Six Recording Studios,
Claire Butler Photography and Tony Mohan, of Midd Atlantic Duplications, who helped this experience become possible.