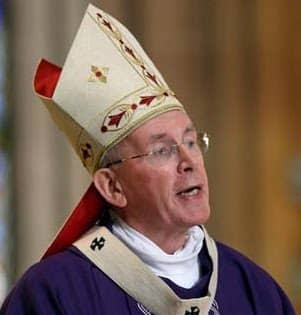 CALLS are mounting to have the remains of one of County Tyrone’s most famous religious leaders – described by Cardinal Sean Brady as “a hero of the Penal Times” – exhumed from a car park in Armagh’s Market Square.

Dean Brian Maguirc, a member of the legendary Maguirc clan from Carrickmore, was the Catholic Dean of Armagh during the Penal Times and Vicar-General to St Oliver Plunkett.

He was imprisoned in Armagh Gaol under penal laws in 1712 while in his late eighties, and died in prison aged 91 years.

Now historians and his descendants have said that his remains should be dug up from the unmarked grave in what was formerly the Armagh prison cemetery and currently part of Market Square.

Interest in Dean Maguirc’s final resting place has been sparked by the tercentenary celebrations of his death, which began last Sunday in Carrickmore with a special concelebrated Mass in St Colmcille’s Church, led by Cardinal Brady.

During the Mass Cardinal Brady (pictured) questioned why a plaque or a memorial could not be erected to mark the spot where his body lay.

Carrickmore historian Marjorie McGurk said that the parishioners of Termonmaguirc which includes Carrickmore, Creggan and Loughmacrory, were united in calling for a fitting memorial to the dean.

“We want Cardinal Brady and the church to lead a campaign to have his remains exhumed and given a proper burial,” she said. “We know his grave is in the precints of the old Armagh gaol, in an area know as ‘the nine steps’.”

In the past, Ms McGurk has conducted searches to find the exact location of the grave, but has been unsuccessful.

In the meantime, a special plaque and stone memorial is being completed at the dean’s birthplace as part of the tercentenary celebrations.

The organisers of the commemoration say they hope to bring home to the general population ‘the immense contribution Dean Maguirc made to the life of the Catholic Church in Ireland during the worst ravages of the of the Penal Times in the 17th and 18thcenturies.’

Other events inlcude a special talk on Dean McGurk, at Carrickmore’s Patrician Hall, on March 6, a tour of local sights associated with the dean in June, a festival of celebration involving Carrickmore’s clubs and societies in August, and, in November, a Pageant performed by pupils of Dean Maguirc College.

Brian McGurk was Dean of Armagh for 40 years and parish priest of Termonmaguirc 1660-1672. He was arrested five times under the penal law statute, but outwitted the courts with his knowledge of canon and civil laws.