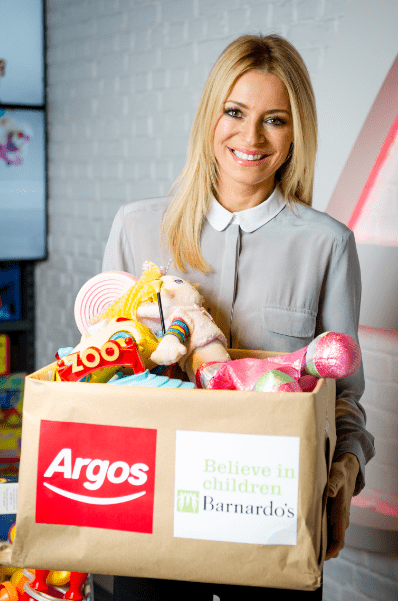 Big hearted children from Armagh care about youngsters less fortunate than themselves and want to give to a disadvantaged child, according to new research released today, Monday.

Rather than see children go without toys this Christmas, 94% of youngsters would happily give up some of their presents if it meant a disadvantaged child could enjoy a happier Christmas.

And this spirit continues with children also sharing their time, with the new study revealing 82% of children across Armagh City and District spend time during Christmas supporting various causes with sponsored silences, carol concerts and charitable donations.

Now the giving can start immediately for children in Armagh with the launch of the third annual Argos Toy Exchange with children’s charity Barnardo’s.

From now until November 25. Argos customers are invited to drop off once-loved toys in return for a £5 voucher towards the cost of new toys (minimum £35 spend), to be redeemed at Argos by December 24.

Locally, people can take donations to the Argos store at Spires Retail Park, at Moy Road, or the Barnardo’s shop on Scotch Street, Armagh.

All donated toys will be taken to Barnardo’s retail outlets to raise funds for the charity.

This year TV presenter and mum of two, Tess Daly (pictured) has teamed up with leading UK toy retailer Argos and children’s charity Barnardo’s to make this year’s event the most successful yet.

Tess Daly, said: “I’m really excited to be a part of the Argos Toy Exchange this year. It’s an incredibly worthwhile cause and one which can help make Christmas that little bit more special for disadvantaged families across the UK. Ahead of Christmas, the Toy Exchange is the perfect way to clear out those pre-loved toys and make space whilst supporting a hugely worthwhile cause. ”

Lynda Wilson, Director Barnardo’s NI, added: “After the success of the Toy Exchange over the last two years, it made sense to aim towards the next milestone, to bring the total target to £2million. We believe that with the support of local children and their families, we can do it!

“Barnardo’s helps some of the most disadvantaged youngsters including those growing up in poverty, those trying to escape abuse and those living in care. Profits from the toys, when sold, will fund this work’.

For more information about the Toy Exchange visit: www.argos.co.uk/toyexchange.