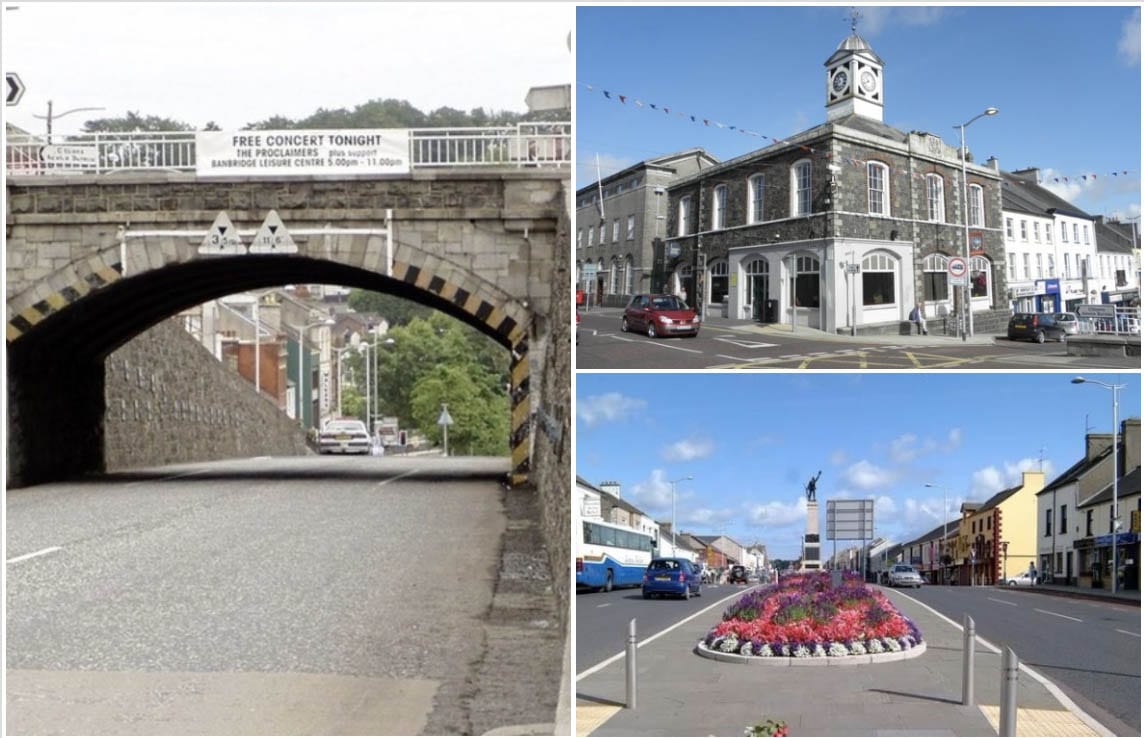 A damning report has cast an exposing light on Banbridge saying the town is falling behind others in the Borough.

Now, a concerted group of cross-party councillors from the Armagh City, Banbridge and Craigavon Borough Council are aiming to breathe new life into the ailing town centre.

The report shines the spotlight on the Co Down town; one in which needs “significant investment” and some TLC.

It also outlines how the individual character of Banbridge depends to a very great extent on ‘the Cut’ and the Downshire Bridge, but that “little is being done to make the most of these features”.

It states that the “condition of the stonework is poor, the railings are functional and add nothing to the aesthetic of the bridge, there is no design lighting and this important feature located at the heart of the town centre is very utilitarian rather than a feature which could potentially define the town”.

The bridge also adds to a “poor sense of arrival”.

It adds: “This bridge is a standard blue metal ‘roads’ bridge which does nothing to raise the significance of the river Bann and its importance to the town centre.

“There are a number of smaller streets connecting the car parks to the town centre, these provide both vehicular and pedestrian access and they require significant improvement as they send out negative first impressions to our visitors.”

However, the recent twilight market which was held below the Downshire Bridge in the Cut was highlighted as it proved to be “a major boost for the town and received very favourable support from both the business and the wider community”.

The report continued: “There is still an opportunity to create significant improvement within the town centre by providing more attractive spaces which remain open to vehicles. This could be done through defined areas of shared space.

Lighting was also an issue mentioned in the report as there is currently “little or no feature lighting within the town centre to define our heritage buildings and special features. In the evening the town provides an unwelcoming experience for visitors”.

The public realm scheme, completed at the turn of the century has deteriorated considerably over recent years.

Further public realm works were completed in Rathfriland Street in 2013 and Gospel Lane in 2014 using natural materials, granite block and kerbs. These streets are superior to all the other streets in the town centre.

However, there still remain smaller streets leading to the main shopping zone which have not been included in any previous public realm schemes and are “in very poor condition”.

Feedback from The Chamber of Commerce is that the town centre is falling behind other towns in the Borough which have received significant investment and improvements in recent years.

In order to ensure comprehensive development of the town centre, Council officers proposed that further work is carried out to scope out a potential town centre-wide development scheme which could be delivered in appropriate stages.

Despite that, councillors were told that there  is currently “no funding in place to support the development of this project and the Council will be working at risk”.

Officers have been engaging with the Department for Communities to seek external funding towards the costs associated development of the project and although there is a willingness to support it there is currently no budget available due to central government limitations.

Councillors agreed to a £30,000 scoping study as a means to looking at a development scheme for Banbridge town centre.

A spokesperson for Armagh City, Banbridge and Craigavon Borough Council, said: “The report presented to Council was part of an agreed strategy and developing action plan focused on specific areas earmarked for improvement within Banbridge Town Centre.

“Areas pinpointed are for particular attention and considered investment where significant economic impacts and immediate wider benefits can be achieved.

“Officially recognised as Northern Ireland’s ‘Best Kept’ town for its inviting entrances, presentation and cleanliness, Banbridge has an excellent reputation. Where specific improvements can be made to further enhance that, these will be made.”