Auxiliary Bishop of Armagh to retire 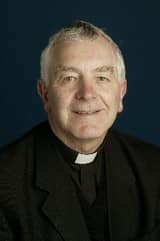 THE Auxiliary Bishop of the Archdiocese of Armagh, Gerard Clifford, has announced his retirement.

Clifford said that his decision was based on medical advice that he had been receiving since last August and Pope Benedict XVI, who retires tomorrows, has accepted his resignation.

He said that he was grateful for the support that he had received during his 21 years as Auxiliary Bishop and thanked the outgoing Pope for granting the retirement.

“It is with great sadness that I come to today’s decision: having grown up locally in the diocese – born in the parish of Lordship & Ballymascanlon in 1941 – and as priest and auxiliary bishop in the Archdiocese of Armagh, I have received great warmth and affection throughout my ministry from the people of the diocese,” he said.

“At this time I wish to pay tribute to Cardinal Seán Brady and to the priests of the Archdiocese of Armagh. Cardinal Brady has been a model episcopal colleague; his humanity, deep faith and natural humility bear witness to the most fundamental of Gospel values.”