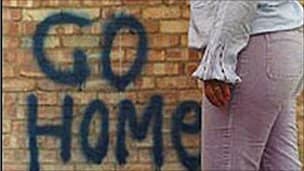 A young Muslim woman was assaulted and subjected to repeated racist abuse in Portadown this afternoon.

Police said the woman was walking along the Gilford Road, going about her own business, at about 4.30pm.

A passing white car began to beep the horn at her and the female passenger started shouting racial abuse at her.

The car then stopped and the passenger got out and assaulted her, using racist language throughout.

Police say the victim – whose family have lived in the Craigavon area for the past 20 years – was understandably distressed by this but thankfully reported the matter to them.

She is being supported by family, PSNI and other relevant agencies will be offering their support and services also.

Police say: “We are treating this incident as hate crime – racially motivated.

“An active investigation is ongoing and a female is presently in custody in relation to the matter.

“A number of passing cars are believed to have beeped their horns on seeing this incident.

“We are urgently trying to identify any witnesses. If you saw anything please contact us on 101 as soon as you can.”

Is this county Armagh’s most expensive property on the market at £1.25m?