Armagh’s darkest day to be remembered with new sculpture 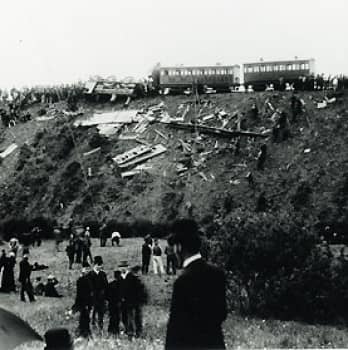 One of the darkest days in railway history – the Armagh Rail Disaster – is to be remembered in a new sculpture, 125 years on.

89 people died and 400 were injured on June 12, 1889, when a Sunday School excursion to Warrenpoint, ended in what still remains, the fourth worst rail disaster ever to have taken place in Europe.

Surprisingly few people in Northern Ireland are aware of the disaster, but at the time it was world news and described more recently as a ‘Victorian 9/11 at the height of the golden age of railways’.

The tragedy sent Armagh City into deep mourning then and for decades after, when hardly a house escaped death or injury. Reporting the next day the Belfast News Letter describes it as follows:

‘The most appalling catastrophe of the kind which has ever taken place in the north of Ireland…In the neighbourhood of those public buildings which have been used as temporary morgues and surgeries, the scene last night resembles such as one can imagine occurring when some form of deadly pestilence has been raging unchecked and has converted a prosperous city into a charnel house. (Belfast News Letter 13th June 1889)

According to the inquest the greatest failing was that of Great Northern Rail to implement adequate safety precautions in the form of vacuum breaks and block signaling. The train had left Armagh Railway Station at 10.20am on the morning of June 12 with around 1,200 people on board, most of them locked into wooden third class carriages.

About a mile and a half outside Armagh, the Engine failed to make a steep gradient and the crew made a decision to uncouple and leave behind the last 10 carriages, taking the first five carriages to nearby Hamiltownsbawn Station, before returning for the others.

However, because the train was using steam breaks, and not the recommended vacuum breaks, once uncoupled, the carriages were severed from the steam breaking system and were dependent on the hand brakes.

When the engine restarted for Hamiltownsbawn, the carriages ‘set back’ and the hand brakes could not hold.

The runaway carriages began rolling down the hill. With no block signaling in place, the next train had already left Armagh Station unaware of disaster ahead and had started to climb the same hill before the driver noticed the runaway carriages hurtling towards him at a speed of 40 mph. It’s estimated around 600 people were locked inside the carriages when they hit the oncoming engine.

Just as the sinking of the Titanic resulted in significant changes to maritime policy – so also did the Armagh Rail Disaster result in radical new rail policies and a new Act of Parliament ‘The Regulation of Railways Act’ rushed into existence on 30th August 1889.  The act is now accepted as the beginning of the modern era of rail safety in the UK, placing for the first time the onus on government for the regulation of rail safety.

Speaking of the new sculpture commission, which is currently advertised on the Council’s website, the Mayor of Armagh City and District Council, Cllr. Robert Turner has said: “It’s taken many generations for the people of Armagh to recover from the awful tragedy that took place that dark June day in 1889. The list of the dead published at the time show that this was a very working class disaster, and one that cut short the lives of many young people – more than half those killed were under 20. The names of all 89 victims will appear on the new sculpture that we hope will be unveiled on the 125th anniversary of the disaster on June 12, 2014.

“We believe the sculpture will be very much embraced by local people who have remembered the tragedy down through the years, and will be glad now that there will be a physical memorial that will help convey the tragedy to people outside Armagh and the many visitors who come to our city each year.”

Artists interested in applying for the new sculpture commission can download the brief at www.armagh.gov.uk/tenders  advertised as a single stage commission, the deadline for receipt of proposals and concepts is 4pm on Thursday, December 19, 2013