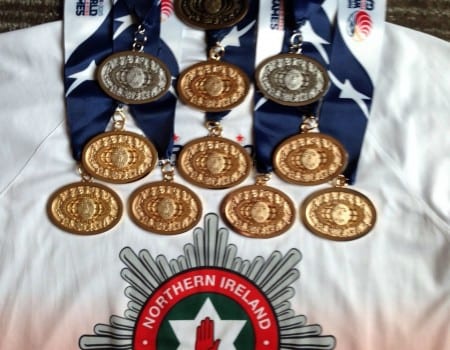 Armagh Watch Commander Aidan Sutton and his Fire Service colleagues have returned from the USA with a bagful of medals!

Aidan and co collected a fantastic 20 medals at the World Polce and Fire Games held at Fairfax in Virginia in the United States.

Along with Warren Campbell and Stuart Knight, the Armagh man lifted a silver medal in the Ultimate Firefighter team event.

Participants from the Northern Ireland Fire & Rescue Service are celebrating a score of medals across a number of different disciplines.

Retired NIFRS Station Commander Gary Davison gained the most accolades as he collected eight gold medals and two silver medals in events such as the half marathon, 800 metres and the individual biathlon.

Following on from the success of the 2013 World Police & Fire Games held in Belfast, where over 100 medals were won across various different disciplines, NIFRS continued in this rich vein of form to enjoy further success in Virginia this year.

NIFRS Interim Chief Fire & Rescue Officer Dale Ashford said: “Congratulations to all the NIFRS medal winners and competitors at the 2015 WPFG in Fairfax.

“It is two years since Belfast hosted the hugely successful 2013 Games and I’m delighted to see that the success of Belfast 2013 has continued in Fairfax 2015.

“The effort that each competitor put into training, preparation and commitment has been rewarded by this fantastic medal haul.

A list of NIFRS medal winners is listed below: