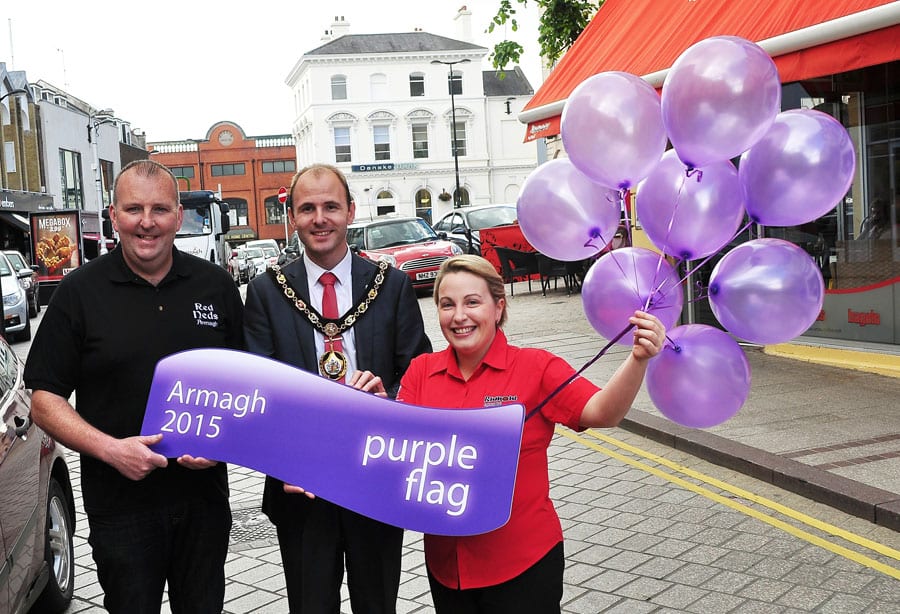 Armagh has been awarded official ‘Purple Flag’ status, recognising it as a vibrant, well-managed, welcoming and diverse city to visit during the evening.

Purple Flag is recognised across the UK and Ireland as the ‘gold standard’ accreditation scheme for raising city and town centre standards and is widely sought after.

Armagh I exclusively revealed in October last year that the former Armagh City and District Council was chasing the accolade.

To win Purple Flag status, towns and cities must provide a clean welcoming and safe environment, with a good mix of venues and attractions which are appealing to visitors – not just at night but also during the day.

Armagh’s award, which was supported by Invest NI and the European Regional Development Fund under the Sustainable Competitiveness Programme for Northern Ireland, means the city is now the fifth location in Northern Ireland to hold this prestigious accreditation. Bangor, Derry-Londonderry, Enniskillen and Newry are also Purple Flag holders.

The city was officially granted Purple Flag status at a ceremony in Leeds on Thursday, after being judged on its mix of venues, ease of access, crime levels and overall safety.

Lord Mayor, Armagh City, Banbridge and Craigavon Borough Council, Darryn Causby, said: “On behalf of everyone in the city who has worked so hard to achieve this sought-after award, Armagh is extremely proud to be one of just six Purple Flag centres in the whole of Northern Ireland. It really is a hallmark for how our night-time economy is operated.

“The city has worked particularly hard in recent years to become a diverse, vibrant and well-managed visitor destination, and this nationally-accredited accolade demonstrates to tourists and residents alike that Armagh offers an enjoyable and accessible night-time economy.”

Led by the Association of Town Centre Management, with backing from government, PSNI and local businesses, the initiative supports local working partnerships striving to achieve excellence for their area. Malachy O’Neill, Chair, Armagh City Centre Management and owner of historic licenced local premises Red Ned’s, said: “Purple Flag status presents Armagh with a fantastic opportunity to further promote its excellent visitor credentials as an attractive, vibrant place for a great evening out and it demonstrates that the city at night is a place for everyone to enjoy, is clean and welcoming, with plenty of great places to visit, eat and drink in, and things to do.”

The results of the national Purple Flag awards were announced at a ceremony held in Leeds on Thursday 2nd July 2015. The other winning cities were Hull, Ipswich, Derby, Oxford and Kettering with Ennis and Dublin receiving their renewal accolade.

Andy Patterson, Policy and Insights Manager at Tourism Northern Ireland, said: “Tourism Northern Ireland welcomes the exciting approach and practical framework Purple Flag presents for raising standards and broadening the appeal of towns and city centres and it is wonderful that Armagh has been recognised for its efforts.

“Vibrant, welcoming, attractive and well-managed locations that offer a positive experience to residents and visitor alike are of vital importance to the development of our evening economy and tourism growth.”

There are currently 65 official Purple Flag holders, with 10 held by locations in the Republic of Ireland.