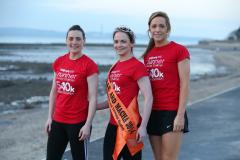 GAA Allstar and Northern Ireland netball player Caroline O’Hanlon will be taking up the Belfast Telegraph Runher Challenge for the very first time.

And she’s persuaded some of her netball and Armagh GAA team mates to join her for the May 22 10K Coastal Challenge.

A former winner of the Belfast Telegraph Sportswoman of the Year (2010), Bessbrook athlete Caroline had a remarkable year in 2014, playing gaelic football and netball to the highest level and lining out for eight teams between two sports, captaining three and lifting five trophies plus a further three winners medals and numerous prestigious personal awards.

Headline achievements included a starring role for the Northern Ireland netball team at her first Commonwealth Games and winning All Ireland Player of the Year in ladies gaelic.

Caroline has been shortlisted many times for the Belfast Telegraph Sports Awards hotly contested Malcolm Brodie Player of the Year accolade and in January this year was pipped to the post by Ireland rugby player Andrew Trimble and was in the esteemed company of fellow finalists footballer Joe Gormley and Ireland hockey star Megan Frazer.

Caroline, who combines her relentless sporting schedule with her career as a hospital doctor, is very much looking forward to making her Runher debut.

The 30-year-old believes that such events and the high profile the Belfast Telegraph provides really helps to bring running to a wider female audience and underlines the health benefits of exercise and a healthy lifestyle.

Caroline said: “I’ve completed ten 10K races to date and I thoroughly enjoy running as well as competing in team games. This is my first ever Belfast Telegraph Runher and I’m really looking forward to the craic and running by the shore side with such a stunning backdrop will be fantastic! I hope the weather is kind to us!”

Caroline is currently vice-captain of the Northern Ireland netball team which will be taking part in the European Championships at the Antrim Forum during May. She is also captain of Armagh ladies gaelic team soon to embark on the defence of their Ulster Championship trophy.

In fact she is one of only four Armagh ladies gaelic players ever to win a coveted All Star award. It will be the stylish right corner back’s first Runher and Mairead is really looking forward to talking up the 10K challenge alongside Armagh GAA team mate and midfielder Caroline O’Hanlon.

Mairead said: “An all-female running event is a brilliant concept and such events really encourage and support women to be the best they can. I feel it’s very important that woman in sport get the profile and support they deserve.”

Mairead, who is from Silverbridge, is now based in Belfast and works as a physiotherapist. She has been an Armagh regular since 2002 and made an exceptional contribution to Armagh’s second most successful season ever in 2014.

The Orchard county won the Ulster Senior Championship and reached the All Ireland semi-finals for only the second time. Mairead helped Ulster win the interpro title in 2014 and scored to help her local club Silverbridge win the Armagh Intermediate Championship for the first time ever.

Twenty-eight year old Belfast based physio, Roisin Murphy is a member of the Armagh ladies GAA squad and currently holds the title Belle of Armagh (2014/15).

She’s delighted to join her fellow county Armagh GAA players Mairead and Caroline and take part in Runher’s 10K Coastal Challenge on May 22.

Explained Roisin: “Runher really helps to promote the health values of running and exercise and that can only be a very good thing! It’s my first ever Runher and I’m really looking forward to the social aspect of the event. With so many girls of all ages taking part it’s sure to have a very special and exciting atmosphere!”

Organisers of this year’s Belfast Telegraph Runher Coastal Challenge have included a brand new 5 kilometre route to complement the regular 10k event which kicks off at Seapark in Holywood at 7pm and follows the North Down Coastal path ending at Crawsfordsburn Country Park on Friday, May 22.

The new 5K point to point category will start at Rockport School, Craigavad at 6.30pm preceding the 10K on the coastal path to the Crawfordsburn finish line.

In addition to the usual top prizes for first, second and third, this year sees the introduction of additional prizes for age group winners in the 10K event. Starting from age 35-39 and increasing in five year age bands, the fastest girls in each band will receive a £50 hoodie and Pure Running T-shirt. 5K competitors can expect special spot prizes and pre-event organisers will also be offering a range of prize draws online or on facebook in the lead up to May 22.

Organiser and Race Director Michael Jenkins, from retail outlet Pure Running, introduced the coastal concept in 2012 and since then the event has gone from strength to strength.

He explained: “Woman of all ages and abilities are encouraged to sign up to walk, jog or run either our classic 10K which begins at Seapark or our brand new 5K from Rockport School. The response to date has been excellent and we anticipate over 1000 ladies donning their trainers and taking part in what is a competitive but really social event.

“Runher is all about friends and family, work colleagues and team mates joining together for fun and exercise. Many ladies take up our team challenge and raise monies for much loved charities – so it’s a ‘win win’ event for everyone involved!

“We have some super supporters of the event who have been involved for many years, not least our title sponsor Belfast Telegraph. Other sponsors include Water Within who will provide refreshments at the halfway point on the 10K race and at the Crawfordsburn finish.”

To enter women should register online through www.runher.co.uk. Entry is £18 until the end of April and £20 during May.

Online entry closes on Sunday, May 17 at midnight but girls can still enter through the Pure Running store in the centre of Belfast on Wednesday 20 and Thursday 21 May from 10am until 8pm. Entries can also be completed on race day, Friday 22 May at Seapark, Holywood from 2pm until 6pm.

“We’re advising competitors to either take the train or get a lift to both starting points as there will be no car parking at Seapark or Rockport School.” explained Michael Jenkins

“5K participants should park on Seahill Road or the Old Seahill Road and walk in, get left off or take the train. 10K entrants are strongly advised to get dropped off at Seapark or take the train. Families and friends coming to collect runners at Crawfordsburn Country Park finish area, must keep the entrance and exit points clear and not park on double yellow lines to give access to our courtesy buses.”

The start time for Runher 10K is 7pm at Seapark whilst the 5K event begins at 6.30pm at Rockport School. Both events will begin in ‘waves’ with walkers at the back due to the narrow coastal path. Organisers will provide a bag drop at Seapark and courtesy buses will take runners back to both Rockport and Seapark start zones.

Established in 2007, Belfast Telegraph Runher is Northern Ireland’s largest female only running event. To check up to date event details visit www.runher.co.uk. Runher is also on twitter @runherofficial and facebook and the event hashtag is #BelTelRunher.

Picture: Making their Belfast Telegraph Runher debuts at this year’s Coastal Challenge are, Armagh GAA players (from left) Mairead Tennyson,  Belle of Armagh Roisin Murphy and Caroline O’Hanlon.  This year’s event takes place on Friday 22nd May and features a brand new 5K route in addition to the annual 10K event which starts in Seapark, Holywood and finishes at Crawfordsburn. For details check out www.runher.co.uk of follow on twitter @runherofficial and on facebook.