Armagh recycling centre to be – recycled! 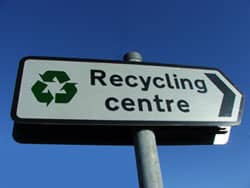 POTENTIAL sites are being explored for a new recycling centre in Armagh.

Armagh Council looks set to bin the facility at Station Road in favour of a new location.

Councillors, at their statutory meeting at the Palace this week, also approved a major publicity campaign to highlight the crippling costs rates could be forced to absorb as a result of continued misuse by locals of their brown recycling bins.

Representatives were told that, if some brown bins are found to be contaminated, a full load has to be sent to landfill instead.

And, with landfill tax due to jump to an unprecedented £8 a tonne next year, it has already been forecast that that alone will force an additional £104,000 on top of existing landfill bills.

Councillors have been told that officers are continuing to monitor carefully brown bin usage and, if successful in identifying householders who contaminate their waste, a visit is made and advice offered.

Waste disposal and recycling remains one of the biggest factors in rates rises over recent years. And, with Government targets for recycling due to rise from 50 per cent to 6o per cent, it is all the more important that the council gets the message across – or face penalties!

The council is to address the issue head-on. A publicity campaign will let people know the exact implications of failing to recycle, just how everyone will suffer the consequences through the impact on household rates.

In the meantime, it has been revealed that several sites have already been looked at for a new recycling centre to replace that at Station Road – and more have yet to be explored.

Neighbouring Craigavon Borough Council, it has been pointed out, is also looking for a new recycling site.

It has been suggested that, given that Armagh, Banbridge and Craigavon Councils will form a new ‘super-council’ in less than three years anyway, if the review of public administration presses ahead, there may be potential for a “joint site at an appropriate location”.