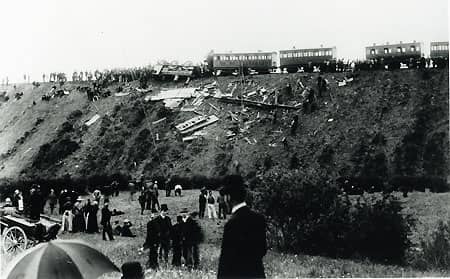 A sculpture to commemorate the 88 people who lost their lives in the Armagh Rail Disaster is to be granted planning approval early next month, Armagh I can exclusively reveal.

An application had been submitted by Armagh City and District Council and the DoE will return an opinion to approve the development when it meets with council on Tuesday, May 6.

This will allow the piece to be in place to coincide with the 125th anniversary of the tragedy this year.

A memorial garden is also planned and the sculpture will be located at the Gaol end of the Mall.

As Armagh I reported in March, Armagh City and District Council’s Community and Economic Manager recently took councillors through a report when he explained that the evaluation of tenders took place in December by a panel including representatives from Portadown and Armagh Railway Society (PARS) and the Mall Trustees.

DUP Councillor Gareth Wilson said it was a “worthwhile proposal” which he supported. He felt that the railway disaster was quite an event and that the memorial should be placed on The Mall.

UUP Councillor Sylvia McRoberts highlighted that the memorial would bring benefits to the community and would encourage visitors to Armagh.  She felt it was important to proceed with the project and felt that the Mall was the most suitable location.

Council Clerk and Chief Executive John Briggs pointed out that the Executive Committee had made the decision to proceed with the project some time ago and that funding from landfill tax should cover the costs of the memorial.

The PARS (Portadown Armagh Railway Society) is leading the project and the location, having been discussed in great detail, was agreed for a central location where people can appreciate it if they are walking, cycling or driving.

A number of sites were considered, including the Palace Demesne, the Mall and the original site of the Railway Disaster.

Following careful consideration and agreement with the Mall Trustees, the Mall was selected.

In terms of financing the project, this is being progressed in a number of ways. PARS had submitted an application to the Heritage Lottery Fund but this proved unsuccessful.

A further bid was therefore submitted to the Landfill Communities Fund, which will fund the project 100% and is awaiting final decision

The Armagh Rail Disaster happened on 12 June 1889 near Armagh, when a crowded Sunday school excursion train had to negotiate a steep incline. The steam locomotive was unable to complete the climb and the train stalled. The crew decided to divide the train and take forward the front portion, leaving the rear portion on the running line.

The rear portion was inadequately braked and ran back down the gradient, colliding with a following train.

A total of 88 people were killed and 260 injured, about a third of them children. It was the worst rail disaster in the UK in the 19th Century and remains Ireland’s worst railway disaster ever.

To this day, it is the fourth worst railway accident ever in the United Kingdom. At the time it was the worst rail disaster in Europe and led directly to various safety measures becoming legal requirements for railways in the UK. This was important both for the measures introduced and for the move away from voluntarism and towards more direct State intervention in such matters.

The proposed memorial garden and the development and commission of a memorial will be similar to that at the Titanic Quarter in Belfast, and will be located at the Gaol end of the Mall, opposite the Turning Point sculpture on the cricket field side.

Other events are also being progressed to mark the anniversary of the disaster, including a schools’ art competition and drama.

Police appeal following a spate of incidents in north Armagh