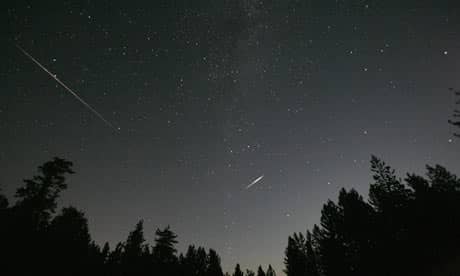 It’s that time of year again and excitement is building with the annual Perseid meteor shower about to light up our night-time skies!

And Armagh Observatory believes the conditions will be ideal to enjoy the nightly spectacle, which is describes as one of the “best and most reliable meteor showers of the year!”

The world-renowned research institute is advising people of the best conditions for viewing.

And, for those who have never watched a meteor shower, it is hoped the coming days will – weather permitting – provide the perfect opportunity.

From the end of July and on into August, people can expect to be dazzled with what promises to be a fine display.

And, at its height, it should be amazing!

It peaks every year around August 12 and 13 and, under ideal conditions, we could be witnessing up to 100 meteors an hour.

According to the Observatory, the weather is still reasonably mild, and the Moon – light from which often drowns out many faint meteors – is waning towards the New Moon on August 14, which means it should  not interfere with the peak of this year’s shower.

Meteors, which are sometimes called ‘shooting stars’ — or ‘fireballs’ if very bright — are produced by small dust particles called meteoroids, with sizes ranging from millimetres up to centimetres or more, as they collide with the Earth’s atmosphere at speeds of typically several tens of kilometres a second, and burn up. The regular annual meteor showers, such as the Perseids, are produced by streams of meteoroids in the inner solar system that happen to be moving on orbits that intersect that of the Earth.

As the meteoroids run into the Earth’s atmosphere, they burn up in the mesosphere at heights typically between 80 and 100 km above the ground.

The meteor shower occurs at a specific time of year, corresponding to when the Earth in its annual revolution around the Sun crosses the Perseid meteoroid stream.

Shower meteors are caused by streams of meteoroids moving in nearly the same orbit as an associated parent body, usually a comet.

In the case of the Perseids, the parent body is a large comet called 109P/Swift-Tuttle. The comet nucleus has a diameter of approximately 25 km, and it moves in a very stable orbit about the Sun, nearly perpendicular to the plane of the planetary system, and with an orbital period of a little more than 130 years.

This means that the Perseid meteoroids encounter the Earth at a relatively high speed, around 60 kilometres a second, so their visible flight across the sky as meteors is characteristically fast.

They are called Perseids because they emanate from a point in the sky, known as the radiant, in the constellation of Perseus.

Although the Perseid parent body returns to the inner solar system every approximately 130 years, the comet itself was only discovered in 1862, and then re-observed during its last orbit around the Sun in 1992.

It is not expected to return until 2126.

Nevertheless, the comet has probably made hundreds of prior revolutions around the Sun, leading to a rather broad meteoroid stream that produces meteors at a low level from now up until the middle of August.

This makes the Perseids one of the most reliable of the annual meteor showers, having been recorded over nearly 2,000 years.

But because the meteors you see are produced by collisions with the Earth’s atmosphere of meteoroids ejected from the comet many revolutions ago – well before any recorded observations of the comet – there is always the possibility of a surprise!

Those who wish to see a Perseid meteor should select a clear, dark observing site with as little moonlight or artificial light pollution as possible.

During August, soon after dark, the constellation Perseus can be seen rising low in the north east. Although Perseid meteors will appear to originate from this general direction, known as the radiant, the actual shooting star can be seen in any part of the sky.

For example, you may look at an angle of about 45 degrees away from the radiant, perhaps overhead or towards the north or east, whilst keeping the radiant near the edge of your field of view. If possible, look away from any nearby light pollution.

Always allow time for your eyes to become accustomed to the dark, and expect to wait 20 or 30 minutes before seeing your first meteor.

To avoid fatigue, wrap up warm and recline in a comfortable chair, under a rug or sleeping bag to avoid the cold.

Then all you have to do is take time to enjoy your view of the dark, night sky!

Dublin and Armagh to contest €10,000 fines from GAA

PSNI warns speeding motorists: “Catch a grip and slow down!”