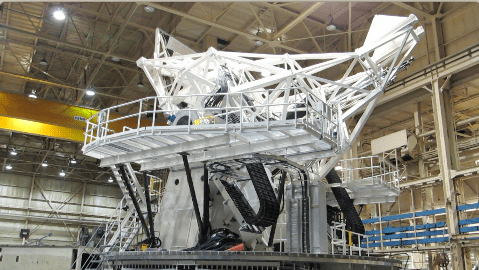 Armagh Observatory and Queen’s University Belfast have secured a role in the construction of the world’s biggest and most revolutionary solar telescope.

They are part of a consortium that includes seven other UK universities and Andor Technology to provide the cameras for the $344M super-telescope, which will be located in Hawaii.

The Daniel K. Inouye Solar Telescope (DKIST), which will see first light in 2019, is being built on Haleakala mountain on the island of Maui, Hawaii, by the US National Solar Observatory.

With a four-metre diameter primary mirror, the telescope will be able to see unprecedented detail on the surface of the Sun – the equivalent of being able to examine a £1 coin from 100 kms away.

Professor Gerry Doyle, Head of Solar Physics research at Armagh Observatory, says this is the “only game in town” as regards ground-based solar physics for the next decade.

“We are delighted to be involved with this project at such an early stage,” he said.

Construction of the telescope has already begun.

It is hoped that DKIST will address fundamental questions at the core of contemporary solar physics. It will do this via high-speed (sub-second timescales) spectroscopic and magnetic measurements of the solar photosphere, chromosphere and corona.

DKIST will be mainly funded by the US National Science Foundation.

Professor Mihalis Mathioudakis, of the Astrophysics Research Centre at Queen’s University Belfast, Principal Investigator of the UK consortium, said: “The Sun is the most important astronomical object for humankind with solar activity driving space weather and having profound effects on global climate and technology-based communications.

“To understand solar activity we need to observe and model the physical processes in the solar atmosphere on their intrinsic spatial and temporal scales so that, among other questions, we can reliably forecast this activity in space.

“Scientific discoveries demand technological innovation and play a major role in economic growth. DKIST will be a revolutionary instrument for ground-based solar physics, which is a growth area in the UK. We will be in a position to explore key questions regarding solar magnetic field generation and dissipation, solar variability, and atmospheric structure and dynamics.

“Our consortium will deliver key equipment that will allow DKIST to achieve these scientific goals and it’s another example of how research impacts on society, both locally and internationally.”

DKIST Director, Dr Thomas Rimmele said: “We are excited to have the UK consortium on board as partners. DKIST will be the world’s most powerful solar telescope. The scientific and technological expertise represented by the consortium is a great asset to the project.”

Dr Donal Denvir, Technical Director at Andor Technology, said: “Andor will play a central role in the design and manufacture of state-of-the-art detectors for this high-profile, solar-physics initiative.

“The technology will provide an innovative combination of high-performance specifications that simply do not exist today, a solution that will prove enabling not only for next-generation solar studies, but for the wider professional astronomy community and beyond.”

The consortium of UK institutes in DKIST is led by Queen’s University Belfast and includes Armagh Observatory, Northumbria University, University College London, and the Universities of Glasgow, Sheffield, St Andrews and Warwick.

The consortium will partner with Belfast company and Queen’s University spin-out Andor Technology and the Science and Technology Facilities Council. The consortium will oversee the development and delivery of the cameras, and take the lead in supporting the UK solar physics community in their use of DKIST by providing a set of processing tools for DKIST data, synthetic observations to validate diagnostic approaches, and support for developing observing proposals.

Professor Gerry Doyle, Head of Solar Physics research at Armagh Observatory, says this is the only game-in-town as regards ground-based solar physics for the next decade and we are delighted to be involved with this project at such an early stage. Construction of the telescope has already begun. Astronomical research at Armagh Observatory is supported by the Northern Ireland Department of Culture Arts and Leisure.

Astronomical research at Armagh Observatory is supported by the Northern Ireland Department of Culture Arts and Leisure.