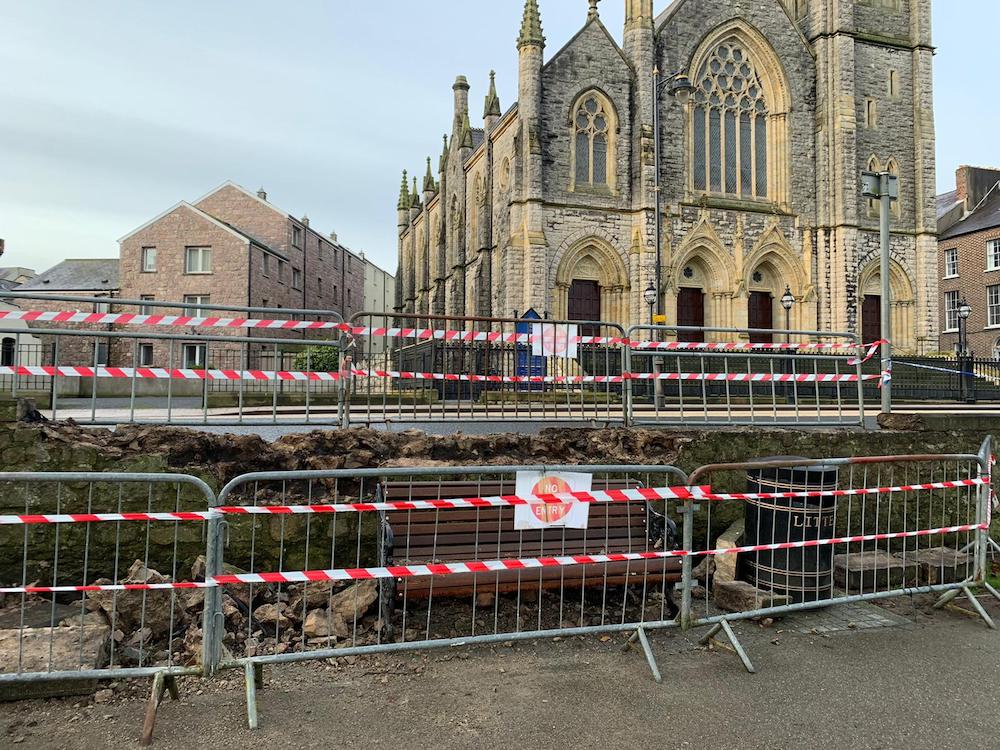 Work to repair the historic walls on the Mall in Armagh – damaged in a road traffic incident almost a year-and-a-half ago – is expected to start shortly, Armagh I can reveal.

For a specialist contractor has been appointed to see the project through.

Armagh I first reported in March that Armagh City, Banbridge and Craigavon Borough Council had gone out to tender for the works.

It will involve the restoration of the historic walls and decorative railings.

Large sections of the masonry of the Mall West wall were shattered and railings bent and twisted beyond repair after the incident in January 2021.

A lorry carrying a pre-fab cabin shed its load on Mall West, becoming dislodged by the branches of trees.

Damage was caused to the wall and railings on the Mall, as well as three other vehicles, as a result of the incident.

The lorry drove into a Seat Leon which in turn collided with a Caddy van and it into a Ford Fiesta.

He was given a three-month jail sentence, suspended for two years, and was banned from driving for a year.

The damaged walls and railings were cordoned off from the public in the interest or health and safety since it happened over 14 months ago. Now they are finally set to be fixed.

No value has been placed on the contract, but, given the nature of the specialist tasks involved, it is expected to represent a significant amount.

Armagh I can now confirm that an appointment to carry out the repairs has been made.

And it has been awarded to Devity Contract Services, which is based in Omagh.

Established in 2016, the County Tyrone firm’s website boasts: “We offer highly specialised services related to the civil engineering industry and are the only company in Ireland which offers an in-house capacity to complete all elements of a conventional remediation to reinforced concrete structures.”

Previous projects have the strengthening of the Galloon Bridge in Newtownbutler, as well as works at the Strule Arts Centre in Omagh and Old Gunpowder Store, Donaghadee.

There is no definitive start date as yet but work – which is expected to take five months to complete – is imminent.

An ABC Council spokesperson told Armagh I : “Council can confirm that Devity Contract Services have been appointed to complete the repairs required.

“No start date is confirmed at this point but work is anticipated to start in the near future.”