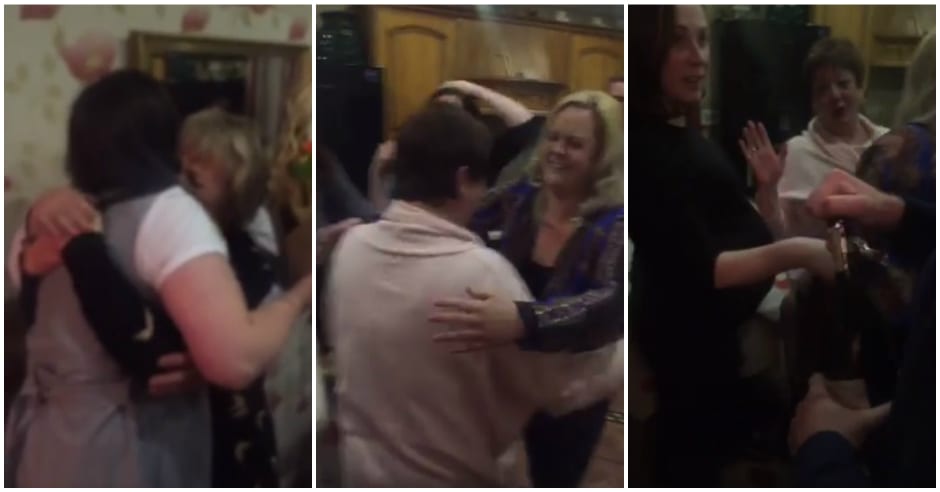 There were screams of joy and tears of delight when an Armagh family were reunited for Christmas in a special seasonal surprise sprung by a big-hearted property company.

Laura Mone from Keady has been longing to get home from Australia for two years but just couldn’t afford the flight and faced spending her second Christmas away from her family.

The competition which was run across the firm’s social media sites on Facebook, Twitter and Instagram reached a phenomenal 112,322 people over a two-week period with 112 applying for the chance to get home for Christmas.

There was no doubting the joy for the Mone family when Laura walked into the house on Sunday night after keeping her trip under wraps from her family.

The family had not been looking forward to Christmas this year as it would have been their first Christmas without Laura’s grandparents who both passed away since she left from Australia.

Now the family say it will be their best ever and the icing on the cake is that Laura’s sister Cara is expecting her first baby on Christmas Day.

“I’ve been buzzing since I was told I had won the competition and I couldn’t tell anybody. I haven’t slept with excitement,” said Laura.

“When I came into the house on Sunday night everybody was just screaming and I’ve never seen my mummy cry and that was a first. Everybody is ecstatic.

“For as long as I can remember we have gone to my nanny and granddad’s house for Christmas dinner and granddad died a few months after I went to Australia and we lost nanny this year and it was going to be a very weird Christmas for the family.

“We are all going to my sister’s in Belfast and it is now going to be the best Christmas ever.”

Laura says she always had the travel bug which is why she moved to Australia two years ago. She has worked a number of jobs before finally starting work as a carer a few months ago which is the career she enjoyed here before she left.

Her work is unpredictable which is why she couldn’t think about saving for her flight home.

Last night her delighted mum Carmel (57) said she and her husband Brian (59) were gobsmacked when their daughter walked into their home unexpectedly on Sunday night: “It is fantastic; I can’t describe the happiness and joy I feel inside.

“Just to see her standing there was such a shock. It was unbelievable, there are no words to describeit. It is going to be a fantastic Christmas now and in fact Christmas started for us the minute she walked through the door.

“Christmas was going to be very strange this year as it would have been our first Christmas without going to my mother’s and we had also lost my dad and Laura wasn’t going to be there.

“This has just lifted the whole thing and made it very special. I don’t think CPS realise how much joy they have created and I can’t thank them enough.”

Art O’Hagan, Managing Director of CPS said: “We felt as part of our 30th Anniversary celebrations, we would offer an opportunity to create a memorable home coming for a special person.

“Also we thought there was no better way could we do it after placing just over 2,000 people in new homes this year.

“We felt it was a chance to give back to the community and really make a family’s Christmas.

“We have been very lucky over the years to have a very loyal customer base so we felt it we wanted to make a real difference.”