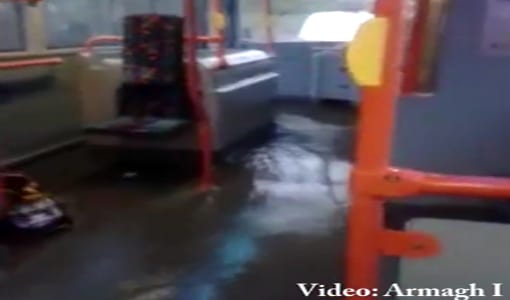 Terrified school children screamed in horror as flood waters poured on to their bus.

Our exclusive video shows water streaming through the front door and flowing down the vehicle.

One young person yells ‘open the doors’ as others scrabble to grab schoolbags and belongings.

The children were forced to climb on to their seats as the water reached a full foot in depth.

Outside, a vehicle drives past the bus, spraying water up and over the windows of the bus.

The incident happened at around 4pm yesterday (Tuesday), as the bus was caught up in the unprecedented flooding on the Moy Road. Earlier in the day, five people had to be rescued from their vehicles after becoming trapped in the floods brought on as a result of Storm Desmond.

And fire crews again returned to the area this morning to rescue another man trapped by rising waters.

A small number of pupils was on the bus yesterday as it made its way from Dungannon to Armagh.

They had passed through Moy when the drama unfolded.

“It was scary at first,” admitted one of the passengers.

The bus driver successfully negotiated the vehicle through the waters and the young people were able to disembark.