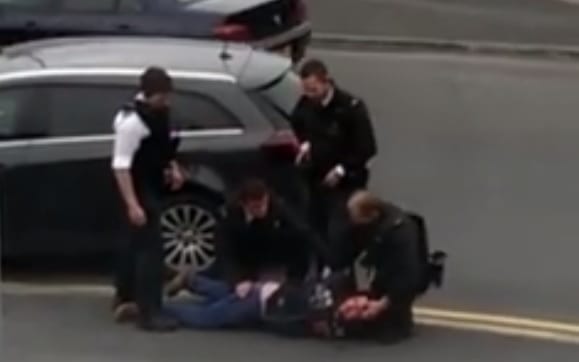 A video showing the PSNI arresting a man in Armagh on Tuesday has been doing the rounds on social media.

The video, posted by Louis Hanley, shows three officers try to initially restrain the alleged offender before being joined by a fourth officer.

The man on the ground, has his arms locked behind his back but continues to struggle which then prompts the officers into using, what appears to be, a more vigorous approach.

It appears that the man on the ground eventually passes out and becomes unresponsive.

Mr Hanley, who shot the video from a nearby house, posted the video on Facebook saying: “Had to crop this to be able to put it up but cops choke him out when he is cuffed, thought I’d put this up for all to see.”

It is unknown what the man was arrested for.

A PSNI spokesperson, in response to the video, told Armagh I: “We would advise anyone who has a complaint about the actions of police to contact the Police Ombudsman.”