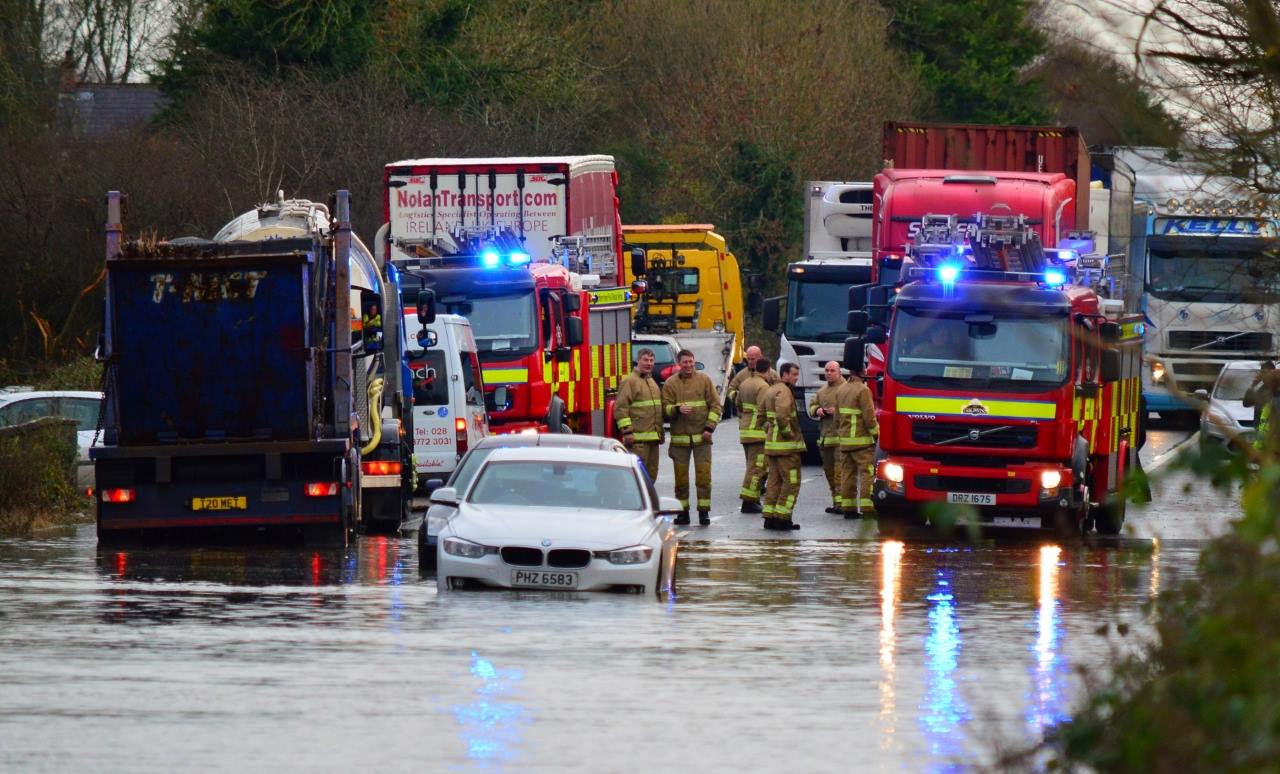 These pictures show the dramatic rescue which swung into operation after motorists became trapped in their vehicles when caught up in flood waters on the Moy Road, outside Armagh.

Personnel from Northern Ireland Fire and Rescue Service had to take five people to safety.

The rising waters, on a stretch of road not usually prone to flooding, come in the aftermath of Storm Desmond.

And more rains are forecast, with emergency services urging motorists and the public to exercise due care.

The drama on the Moy Road unfolded at around 2.15pm this afternoon (Tuesday).

A 4×4 vehicle and a car could get no further through the flood waters and came to a halt.

Firefighters from Portadown, Armagh and as far as Warrenpoint attended.

One woman had to be removed from the car and four others were also freed from the 4×4.

An eyewitness told Armagh I: “Some motorists decided basically that they could chance it and go through the water.

“The problem was, so were many lorries and the waves they also created hit oncoming vehicles and conked them out.

“I think the other issue was cars were in queues and they saw the lorries go through so obviously thought they could too.

“There were no diversions at all in place except for a small sign saying ‘Flood’. Some people tried to divert along the Charlemont Road towards Blackwatertown, but this was also flooded. The only way round was via Collegelands Road, but there was no one to divert.

“I witnessed lorry drivers actually arguing with firefighters for trying to tell them the road was impassable.”

Fortunately no one at the scene today required medical attention.

Our eyewitness praised the emergency services for dealing with a very difficult situation.

“The firefighters did a great job,” he added. “They also took on road directing duties as there were no police available from what I could understand and the fire oficer was on the radio trying to have police at the scene as they had no real proper power to stop people trying to pass the flood.”

There are also reports of flooding in surrounding areas and motorists should exercise extreme caution.

Armagh I followers have taken to Facebook to warn about the conditions and tell of their experiences.

One said: “I had to take a detour on my way to Dungannon earlier!!! There were no flood signs on the Armagh side to warn motorists.”

Another commented: “Also everyone should be aware that the road between Blackwatertown and Moy is flooded also. Be warned no signs up, the road as you go past St Jarlath’s school and takes you out at Mellon Motors.”

Another driver said: “Driving back to Armagh from Moy. Police have blocked and created diversion at Charlemont Roundabout. Expect some delays as traffic is backed up as far Spar in Moy.”