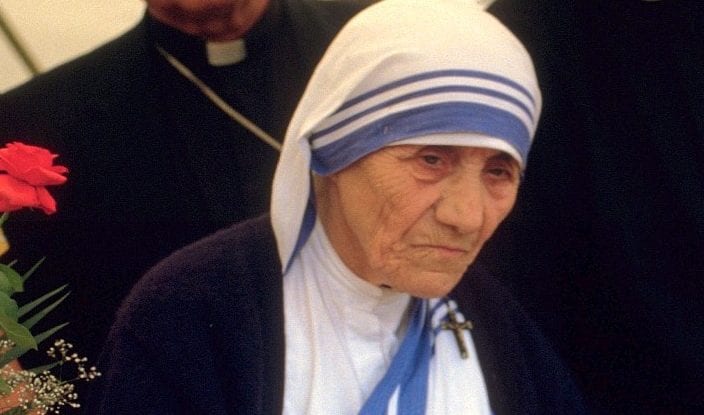 Mother Teresa will today be canonised a saint at a service in the Vatican City – twenty years after her visit to Armagh.

On her visit to the city in June 1996, Mother Teresa spoke at St Patrick’s Cathedral for the opening of a community house of her Missionaries of Charity Order, who work with the poor and homeless.

She was repeatedly applauded as she spoke to the 1,400-strong congregation and despite being bound to  a wheelchair at the age of 85 Mother Teresa struggled to her feet and, with the support of two sisters, stood for the concluding hymn.

She told the congregation: “A family that prays together stays together.

“A family that stays together loves each other. Real loving and understanding give peace and joy.”

Mother Teresa also met other church leaders during her visit to Armagh, including Cardinal Cahal Daly and the late Church of Ireland Dean, the Very Rev Herbert Cassidy.

Speaking ahead of today’s canonisation of Blessed Mother Teresa in Rome, Archbishop Eamon Martin, Archbishop of Armagh and Primate of All Ireland said: “Blessed Teresa is greatly loved and venerated by the faithful throughout Ireland and by millions around the world. By declaring Mother Teresa a saint, the Holy Father Pope Francis is affirming her long life of heroic virtue, and outstanding fidelity to God’s grace.”

Archbishop Eamon continued: “Mother Teresa’s canonisation will be a source of great pride and joy to the over 5,000 Missionaries of Charity – sisters, brothers, priests and co-workers – in their 700 convents, who will rejoice wholeheartedly when Pope Francis proclaims that Mother Teresa is a saint. The Loreto Sisters in Ireland whom she joined in Dublin in 1928 and by whom she was sent to India, will also rejoice. In particular, I offer my prayerful good wishes at this time to the Missionary of Charity communities ministering in the Irish dioceses of Armagh, Dublin, Cloyne and Elphin.

“Mother Teresa was a champion of the poor and continues to be a source of inspiration to all of us, especially during this Year of Mercy we are celebrating at the invitation of Pope Francis. I look forward to celebrating a Mass of Thanksgiving on Monday 5 September for the Church’s newest saint. All are welcome to join me in Saint Malachy’s Church, Armagh, for this special celebration.

“With her canonisation, the Church is offering Saint Teresa of Calcutta to all of us, as a model of hope, charity and mercy.”