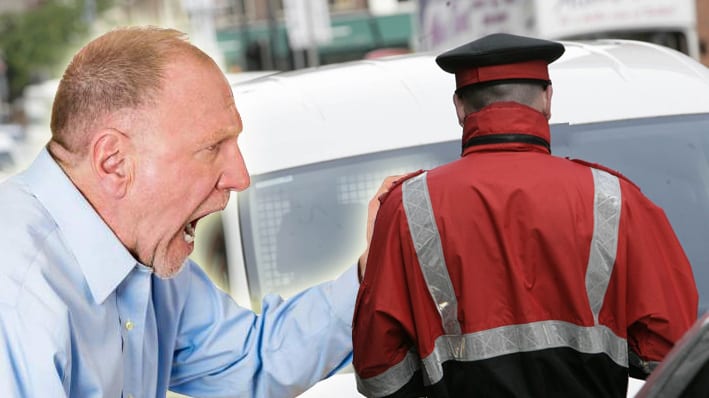 Hot-headed and heavy-handed motorists turned their anger on parking attendants in County Armagh on an alarming scale last year.

And the majority of the incidents – which saw ‘red coat’ workers met with “violence and aggression” – happened in Armagh city itself.

The Department of Infrastructure has confirmed there were no less than EIGHT parking attendants attacked as they went about their day’s work in County Armagh last year.

Armagh I was provided with details under Environmental Information Regulations, after a Freedom of Information request submitted by ourselves.

Over the course of the past financial year – from April 1, 2015 until March 31, this year – a total of eight attacks were recorded.

And all but one of these happened in the city centre.

Armagh I recently reported that a total of 2,592 parking tickets were issued in Armagh during the same time period for ‘on-street’ parking offences.

But the reactions of some frustrated drivers have been beyond extreme. And, it must be said, not all incidents involved motorists – some attendants suffered abuse from members of the public simply because of the nature of the job which they do.

Not every incident where there is a ‘difference of opinion’ gets reported.

But on eight occasions, incidents against parking attendants in County Armagh were of such note that they were logged – under the “violence and aggression” category – with some horrific abuse being dished out.

This has included physical attacks on workers – both male and female – as well as crude and vulgar verbal attacks and taunts of a personal nature.

Three of the incidents happened in the area of Market Street in Armagh – two in under a week.

The first was on July 20 last year, when a parking attendant was set upon for trying to enforce loading bay restrictions outside business premises in Market Street. Five days later and another incident was recorded at Market Street.

The third incident – recorded on September 25 – again saw a parking attendant come under attack outside the branch library in Market Street.

There were further incidents recorded on October 29, outside McKeever’s Chemists, at Cathedral Road, on November 4, and alongside the parking bays at Linenhall Street – outside of the main car park – nine days later.

The most recent attack happened nearby, in Dobbin Street, on March 3 this year.

Only one other incident was recorded in the space of a year in whole of County Armagh and that was on September 19 last year, at Church Place in Lurgan.

The work which they do may not be popular but it is essential; there can be no justification for such sickening attacks on anyone simply for doing their job.