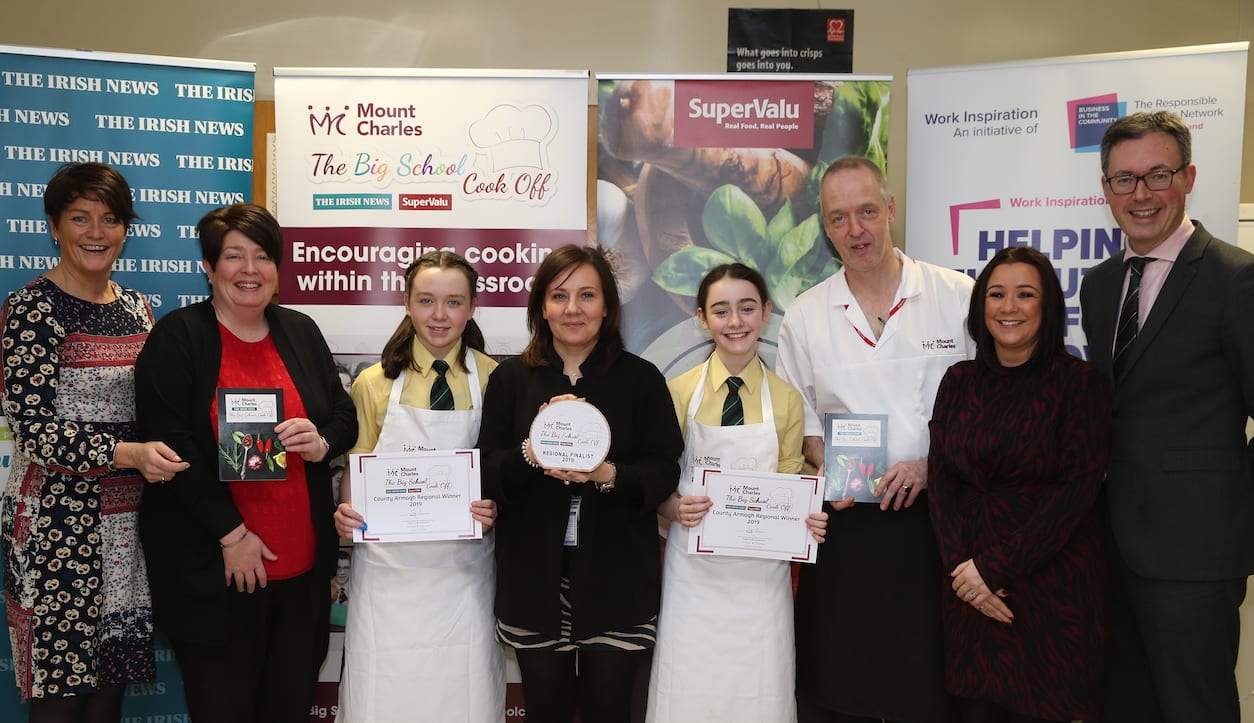 The culinary talents of two St Catherine’s College students have ensured a place in the regional final of Mount Charles Big School Cook Off for the city-based school.

And it earns them a place in the grand final of the country-wide cookery competition in March.

Keely-Mae and Aoife will join seven other teams from across Northern Ireland and Donegal to take part in the final stage of the 2019 Mount Charles Big School Cook Off in association with the Irish News and SuperValu.

Special guest Imelda McCarron, a contestant from the BBC’s Great British Bake Off, will join the judging panel for the grand final.

Each of the teams taking part in the final won a regional heat where they competed against other young people from their county, with a total of 37 schools taking part in this year’s competition and two heats taking place in County Antrim due to the sheer volume of entries.

Nearly 200 dishes were entered into the first stage of the contest, with only the very best making it as far as the regional heats; and the teams that were successful at those heats are now preparing in earnest for the grand final at Belfast Met’s Titanic Quarter campus in March.

Marina Feeney, Home Economics teacher at St Catherine’s College, said: “We are ecstatic to have won, the girls worked so hard and put in a lot of time and effort so to win the regional heat is a great reward for that.

“They have cooked to an excellent calibre and I’m hopeful that these are future GSCE students of Home Economics. This competition has given them a taste of what it’s all about and training for that next level, as well as giving them valuable life skills and confidence in their abilities.”

Caitriona Lennox, Business Development and Retention Manager at Mount Charles, Ireland’s largest locally owned foodservice company, and Big School Cook Off Ambassador, said: “First of all, a huge congratulations to all of the schools and the team from St Catherine’s College who made it to the final stage of the competition!

“Our taste buds were well and truly tickled at the heats, the talent and creativity these young chefs displayed was, quite simply, exceptional.

“We would love to see more young people considering a culinary career, so the Big School Cook off is our way to encourage and inspire them, helping them to grow a valuable life skill that might just pave the way to success in the future.”

Food market retailer SuperValu is the proud sponsor of the Big School Cook Off.  Commenting on the announcement of the finalists,

Brendan Gallen, Head of Marketing, said:   “We were astounded by the level of talent and creativity on display at each of the regional heats and we’d like to congratulate everyone that has made it to the grand final.

“SuperValu prides itself on providing a great selection of fresh, local produce to communities right across Northern Ireland, inspiring people to get back into the kitchen and to make healthier choices.

“It was really encouraging to see this next generation of foodies in action; their passion and enthusiasm for food, great quality ingredients and cooking was truly inspiring.”