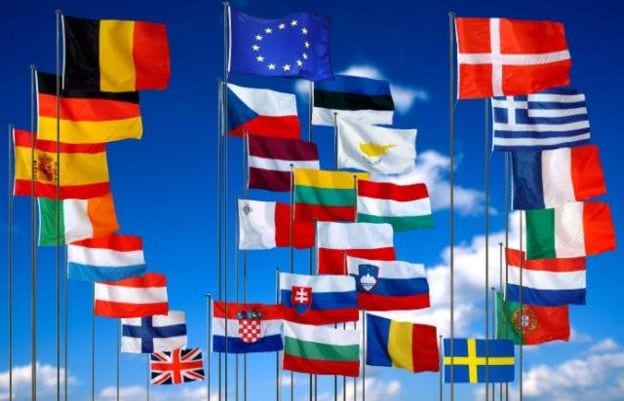 With just three days until the biggest vote in a generation, Armagh I have asked each of the Assembly parties in Newry and Armagh what they are campaigning for and why.

The British public are fairly evenly split, according to the latest opinion polls, but it’s up to you to make up your own mind.

*Tomorrow, a special report by Armagh I will detail each and every cent given to Armagh by Europe since 2010.

Sinn Féin is campaigning against an EU exit and encouraging people to vote to put Ireland first and vote to Remain.

It can only be won by uniting the socialist and progressive forces within Europe and those governments and parties – like ourselves – who dare to challenge the policy of austerity.

The British Government agenda is entirely regressive and ignores the severe consequences BREXIT would have for the island of Ireland and for Irish people living here.
And make no mistake; those consequences would be severe; nowhere more so than in areas like this constituency close to the border.

The return of a hard border would have a hugely detrimental effect, not just on the day to day life of the 14 million commuters that cross the border at Newry alone every year but it would present a huge obstacle to businesses north and south.

The initial combined financial loss of EU investment, subsidies and funds to the border region in the event of a Brexit would be at least €3.5 billion.

An exit from the EU would mean direct agricultural support payments from the EU would stop. We currently receive €326m annually to support our farmers; we also secured £186.5 million sterling of EU funds towards our new Rural Development Programme. The new EMFF scheme which will support our future fishing industry is worth £16.9 million to our local fishermen while last year SF Minister Michelle O Neill negotiated a £5.1m EU targeted aid package for our dairy farmers.

Over the last five years we have seen how eager George Osborne is to cut public spending in the North.

Only a fool would believe he will replace European funding for agriculture, PEACE, and other funding streams should there be a decision to leave the EU.

On an island the size of Ireland, which has been failed by partition, it makes no sense to take any steps to reinforce the border.

We cannot allow the narrow interests of a section of the Tory party to drag us out of Europe and set our political agenda.

My message to voters across Newry and Armagh is very clear, vote to take back control of our own affairs. Our British sovereignty is undoubtedly being eroded with an ever more encroaching, over bureaucratic and most worryingly of all, unaccountable EU, legislating and taking decisions on our behalf, many of which are detrimental to our country.

The past number of days has seen a very deliberate attempt by the Remain campaign to heighten fears and predict a doomsday situation should the British people vote to leave Europe. Their claims have been scandalous and I have no doubt that as the clocks counts down to Thursday, the scaremongering will only get more dramatic.”

As someone who has been involved in farming all my life, I have no fears over leaving the EU. Indeed I am firmly of the view that the savings that would be generated from leaving the EU would be sufficient to ensure that that the UK could easily continue to provide support to agriculture and indeed the Secretary of State for Northern Ireland has given that assurance.”

I am clear in my decision to vote to leave Europe as I know that if we remain, the costs of the EU will only increase, our ability to operate as a sovereign British nation will be eroded further, our borders will be even less controllable and with the strong possibility of other countries joining the EU, that will mean an even greater demand placed upon the UK to provide yet more money to this insatiable system.

We have one opportunity on Thursday to put the brakes firmly on the EU and end its incessant and expensive encroachment in our country, do not waste this opportunity, vote Leave.

I have never been a great EU enthusiast, but I have always been a political realist.

My views and opinions have been forged by forty plus years in the Ulster Unionist Party and my service in local Government, the Assembly and the Executive.

Being in Government, in particular my four years in Regional Development, sharpened my view that the EU, for a place like Northern Ireland, provides real opportunity.

There are many regions of EU member states like the West of Sweden, or Badden-Wurtemberg in Germany, who sweat the opportunities that EU competitive funding provides.

During the last mandate Northern Ireland upped its game on this competitive component of EU funding –we learned how best to sweat these opportunities too. In DRD I established a dedicated unit to target EU funding, and we substantially grew our share. And significantly Northern Ireland is a net beneficiary of EU funding –our region gets back more than we put in.

In the past few years we secured EU funding contributions for many local infrastructure projects; from the A2 and A8 road schemes in Carrick and Larne to new buses in Belfast, and from the train station refurbishments in Portadown and Antrim, to the huge upgrade of the Londonderry/Coleraine rail line, not forgetting the entire funding of the Enterprise rail fleet overhaul on the Belfast/Dublin service. The more we engaged with Europe the more I found there was a desire to fund projects in Northern Ireland, and a frustration that the UK as a whole was not pitching hard enough to secure funding –again in a sense providing us in Northern Ireland with greater opportunity.

Outside the EU many of these projects would simply not have happened, because the funding would not have been made available either centrally or by our devolved administration –savings in London will never equate to spending in Northern Ireland.

I am pleased to say we left a pipeline of legacy projects too. Design funding was secured for the new Belfast Transport Hub at Great Victoria Street and for the complex York Street Interchange road project –and I have found from experience that when Europe buys into the design, they will more often than not part fund the construction too.

At Warrenpoint Harbour, European funding interest was pricked by the proposed Newry Southern Relief road through the Motorways of the Sea funding stream, and in Londonderry further EU funding had been earmarked to provide a new rail station and transport hub.

Therefore in pure money terms Northern Ireland has done particularly well in Europe and if we remain I am confident we will do even better in the future.

But the Referendum debate has shifted significantly in recent weeks, and in a way understandably so, from the economy to immigration. Right across the UK people are concerned about immigration and pressures on public services during this current period of austerity –it doesn’t always cut a great deal of ice with public opinion that the vast majority of EU migrants, who come to the UK, tend to work and contribute –paying in much more than those who take out.

In our NHS you are more likely to be helped by an EU immigrant, than find yourself stuck in a queue behind one.

Indeed EU and non-EU immigration tend to get confused and sometimes deliberately so -and an argument is made about taking back control. Yet we do have absolute control over non-EU migration, there is no free movement there, and yet the numbers of newcomers are higher than from within the EU.

So my point is this, for those who believe a vote to leave will radically change the picture of immigration –put simply it wont. The much vaunted Australian points based system was specifically designed to grow the Australian population through immigration –not reduce it.

Set in contrast to the potential adverse economic impact of Brexit, issues of immigration are wider than the EU Referendum and ultimately wont be resolved by the outcome of it.

Look at what has been said about the border with the Republic –the leave campaign are maintaining it will stay open and free but at the same time say they will control immigration to the UK, both EU and non-EU. The Republic has no right to say no to EU nationals, and the UK will have no right to tell the Republic which non-EU nationals they should admit.

I fear like so many others that customs checks will disrupt life along the border and immigration checks will end up in our ports and airports that link us with GB, providing Northern Ireland with a diminished status within the UK.

It is for these reasons, together with the potential destruction of the Union that a second Scottish referendum could deliver, that brings a political realist like me to conclude that it is in Northern Ireland’s economic interest, and in the interests of Unionism as a whole, for the UK to remain fully within single market and within the EU.

Whilst I accept this is a position that appeals much more to the head than the heart – the referendum on the 23rd should not be decided on instinct or emotion, it should be determined with dispassion on cold hard reality.

“I know people are suffering from election fatigue. After three years of elections and fresh from a three-month Assembly election campaign, we’re all a bit weary. But this Thursday’s vote on our membership of the European Union is the most critical test of public opinion since 1998.

“During the course of this campaign it has been proven, without a shadow of a doubt, that family incomes, job security and investment will all be dealt a hammer blow if we’re forced out of Europe. And be in no doubt, the British Chancellor will be in no rush to find extra resources to defend our farming communities, our manufacturing industry or the thousands of jobs that rely on cross border trade with the South.

“More than perhaps any other area, Newry and Armagh has benefited from an open border with the South. Leaving Europe would mean a return to a hard border with customs check points stifling trade and cross border cooperation. Given the fragile nature of our recovery, it’s not something we can withstand.

“On Thursday we have the opportunity to defend our position in Europe against the narrow thinking Nigel Farages and Boris Johnsons of the world. We must stand together and we must vote Remain.”