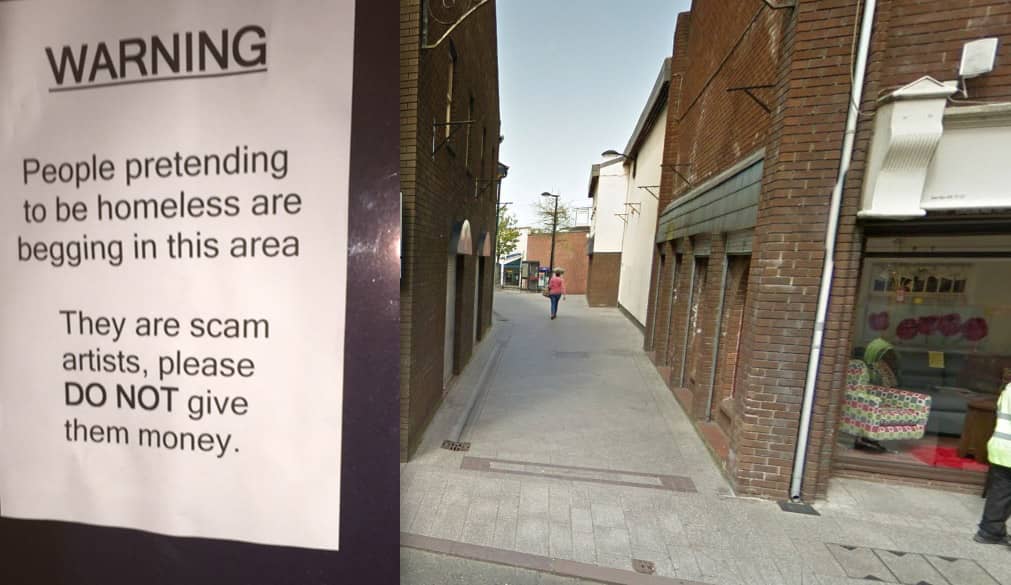 Fed-up locals have taken action against begging in the city centre.

Several posters have been pasted at locations across Armagh.

They have appeared in response to a marked increase in the number of people asking for money from passersby going about their business.

The poster pictured was pasted to a board at McCrums Court and is one of a number which have appeared in the area.

It reads: “Warning: People pretending to be homeless are begging in this area.”

And it claims: “They are scam artists, please DO NOT give them money.”

The woman who sent us this photograph said she was fed up and had felt intimidated at times by people begging.

“It’s getting to be more in your face now,” she said. “There have been people selling magazines around the city which is one thing.

“But now they are actually just sitting on the footpath, blocking it basically. I was wheeling a pram and could not get past. A man – he looked to be in his 20s – was sitting outside Around A Pound and I couldn’t get past. He asked for money and I said I had no change. It’s no longer a case of being able to walk straight on but they are actually preventing you from moving by without response.

“I don’t know if they are homeless or not. But if they are there are bound to be charities and places which can offer support and help. People should not have to feel put under pressure when they go into town to do their shopping. I will support charity, of course I will, but you just don’t know who you are giving to or if the people begging are in genuine need or not.

“When I see someone begging and smoking at the same time you have to ask yourself – well, if you can afford cigarettes…!”

Under the Vagrancy Act 1824, it is a criminal offence to beg in a public place.

It is, however, not usually high priority when it comes to enforcement.

Only a handful of cases in recent years have gone to court in Armagh.

Action only usually follows in the case where a person is known to police as a repetitive beggar or they are causing a nuisance. Very often an individual will simply be moved along or spoken to and advised that what they are going is not legal.