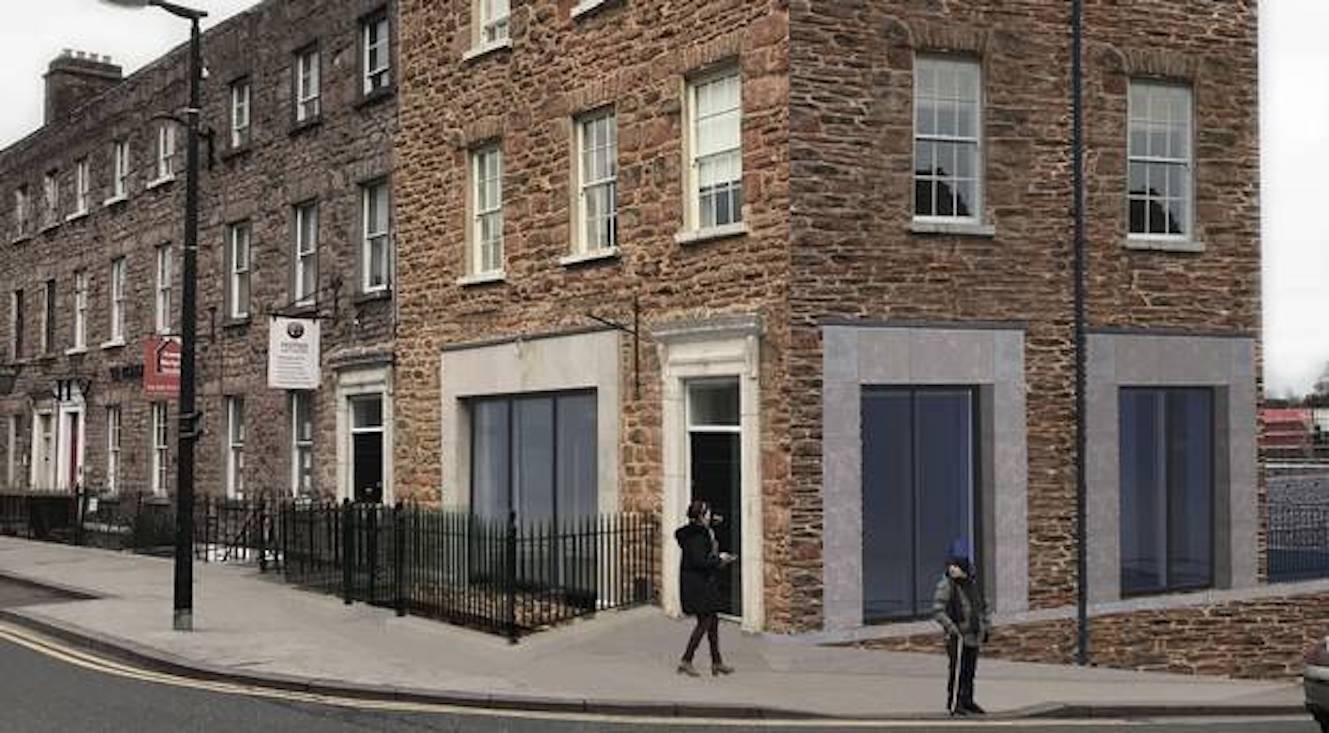 One of Armagh’s most important buildings – sadly gutted in a fire in the middle of the last century – will be rebuilt and opened as a restaurant, with approval for the exciting development imminent.

Officials at Armagh City, Banbridge and Craigavon Borough Council have this week recommended the scheme – at No 1 Seven Houses – will go ahead.

It would see the creation of a new restaurant – at both basement and ground floor levels – when the construction work is complete, with papers estimating at this stage the creation of six new jobs when up and running.

An application for the work – submitted by development company Dunarm Ltd – was submitted to the ABC Council for consideration earlier this year.

There would also be two new two-bedroom apartments included – at first and second floor levels.

The iconic three-storey building perished in a fire in December 1955 and the remains were razed to the ground two years later, despite the protests of the citizens of Armagh. The site has remained vacant ever since.

Outside would be built a new stone boundary wall and railings puts in place.

The work would complete the famous row of Seven Houses, which was initially constructed in 1774 by Dean Averell for his sisters. The destroyed property was considered the most important, commanding, as it did, the prominent site on the corner of Upper English Street and College Street.

The design work of the new development would be consistent with the neighbouring properties which over the years have had a mix of uses from hospitality to office accommodation to residential.

According to a planning statement submitted to council, a series of sketches were worked up by Armagh-based da Architects, and presented to the applicant, each seeking to “maximise the reinstatement of the historic fabric” of the building, while creating a “new lettable restaurant” at basement and ground floor and apartments at first and second floor levels.

The architects carried out a detailed and measured study of the interior and exterior of the existing buildings.

The aim is for a building that “contributes to its setting and embraces its significance”, particularly external features such as the windows to front and side.

The planning statement adds: “These will all be in keeping with those of the adjacent properties. Rear extensions will clearly distinguish itself from the part of the building to the front and will aim to pay homage to the original building, which had a curved window to the rear which looked towards the picturesque Mall.”

The statement says: “All ensure that the new building will be of a similar character and quality of the other six buildings.”

The architects “have proposed a sympathetic but more open contemporary aluminium framed screens surrounded by an ashlar stone surround at ground floor level on both the Upper English Street and College Street elevations reflecting a new commercial aspect and value to this building.

“Overall, this will improve the significance of the heritage asset both in terms of the special character of the listed buildings adjacent and in its contribution to the character of the conservation area.”

The property would also benefit from the provision of a lift and staircase access.

Despite several attempts previously over the years to replace this important building, it has not happened.

But with work continuing to redevelop important buildings in Armagh under the ongoing multi-million pound Townscape Heritage Initiative, it now seems certain that this will finally go ahead.

The development is now being recommended for approval, with a separate application for listed building consent also supported.

These are the professional opinions which will go to council’s planning committee, where there is likely to be no objections to the renewed completion of this famous row of historic properties after all these years.