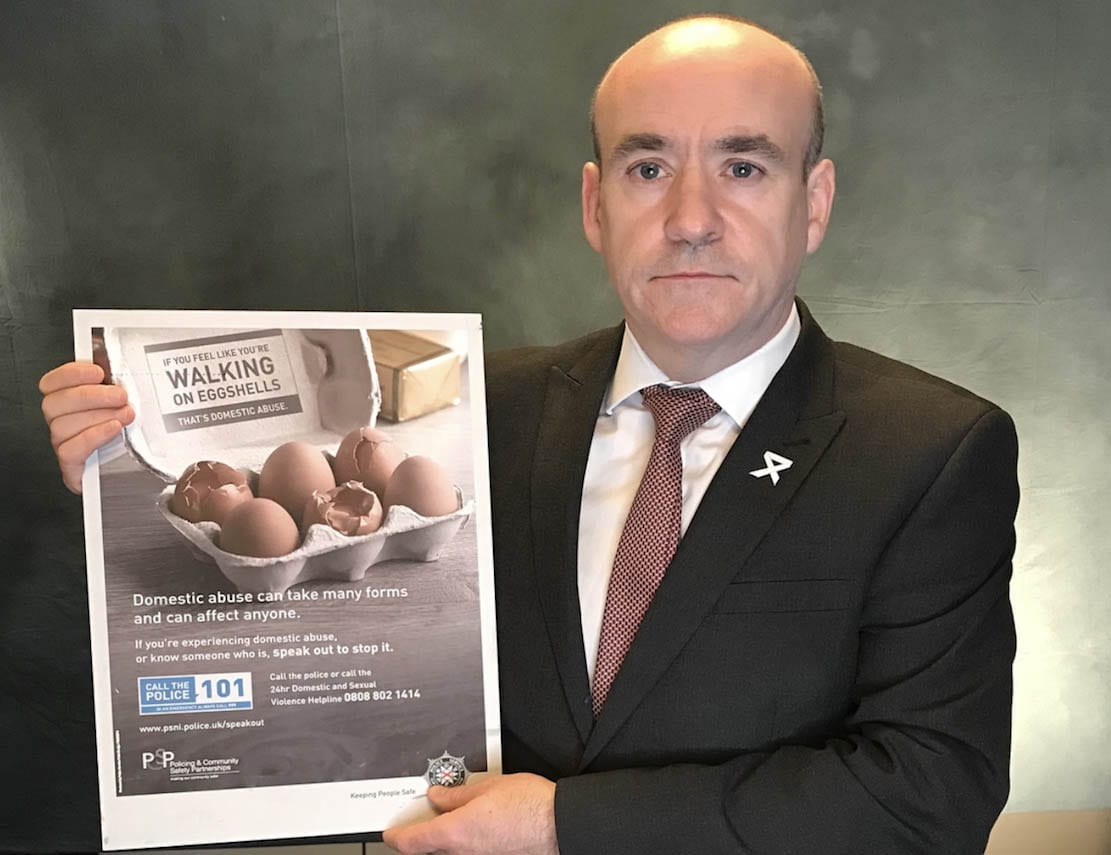 The Police Service of Northern Ireland has this week launched its annual domestic abuse Christmas campaign.

Scheduled to run until mid-January, the aim of the campaign is to encourage the reporting of incidents and show victims they can take steps to stop it.

The campaign’s message is ‘If you feel like you’re walking on eggshells that’s domestic abuse’. It will be promoted via online advertising across Northern Ireland.

Detective Superintendent Ryan Henderson, from the PSNI’s Public Protection Branch, said: “We want to remind people they do not have to suffer in silence; that they can come forward to report any incident of domestic abuse to police.

“Domestic abuse doesn’t only occur at Christmas; it happens all year round.

“Unfortunately, however, we know over the Christmas period incidents of domestic abuse rise and when we look at the figures from last year’s campaign, which ran from 15 December until 16 January, the highest level of incidents reported to police was on New Year’s Day when we received a total of 142 calls for help compared to 147 the previous year. On Christmas Day 2017, there were 84 incidents reported to us compared to 96 from the previous year.

“These stark figures tell us more victims are finding the courage to pick up the phone and make a report, which is encouraging, but we must always remember behind each statistic is a victim.

“What is also alarming is that we respond to an incident of domestic abuse every 17 minutes.

“Unfortunately, many incidents of domestic abuse still go un-reported, but we hope this campaign will go some way towards changing that and will encourage anyone impacted by domestic abuse to report it to us.

“Domestic abuse is a terrifying crime, which can have a long lasting impact and it can affect anyone, and often leaves victims feeling isolated and alone.

“Our role is about prevention, protection and prosecution; to prevent further violence, to protect the victim, children and other vulnerable people and to facilitate the prosecution of offenders. We want anyone impacted by domestic abuse to know there is help out there.
In March of this year, the Department of Justice launched a new scheme – The Domestic Violence and Abuse Disclosure Scheme (DVADS) – aimed at helping to protect people from becoming a victim of domestic violence or abuse.

It allows a person to make enquiries confidentially to police when they have concerns their partner has a history of abusive behaviour. This allows them to make an informed choice about an existing personal relationship. An application can also be made by a third party who knows them and has concerns.

Since the introduction of the scheme on 26th March until 30 November, there were 177 applications submitted. Ten disclosures were made.

Detective Superintendent Henderson from the Public Protection Branch said: “Previously, it would have been difficult for someone entering a new relationship to find out, or be aware if their new partner had any prior convictions for violence ordomestic abuse. This scheme makes it possible for people to take that extra step if they are concerned to do what they can to protect themselves.

“I want to encourage anyone suffering from domestic abuse to call their local police on the non-emergency 101 or, in an emergency, always call 999.

“A 24-hour Domestic and Sexual Violence Helpline is available to anyone who has concerns about domestic or sexual violence, now or in the past on 0808 802 1414.”
Additional information: