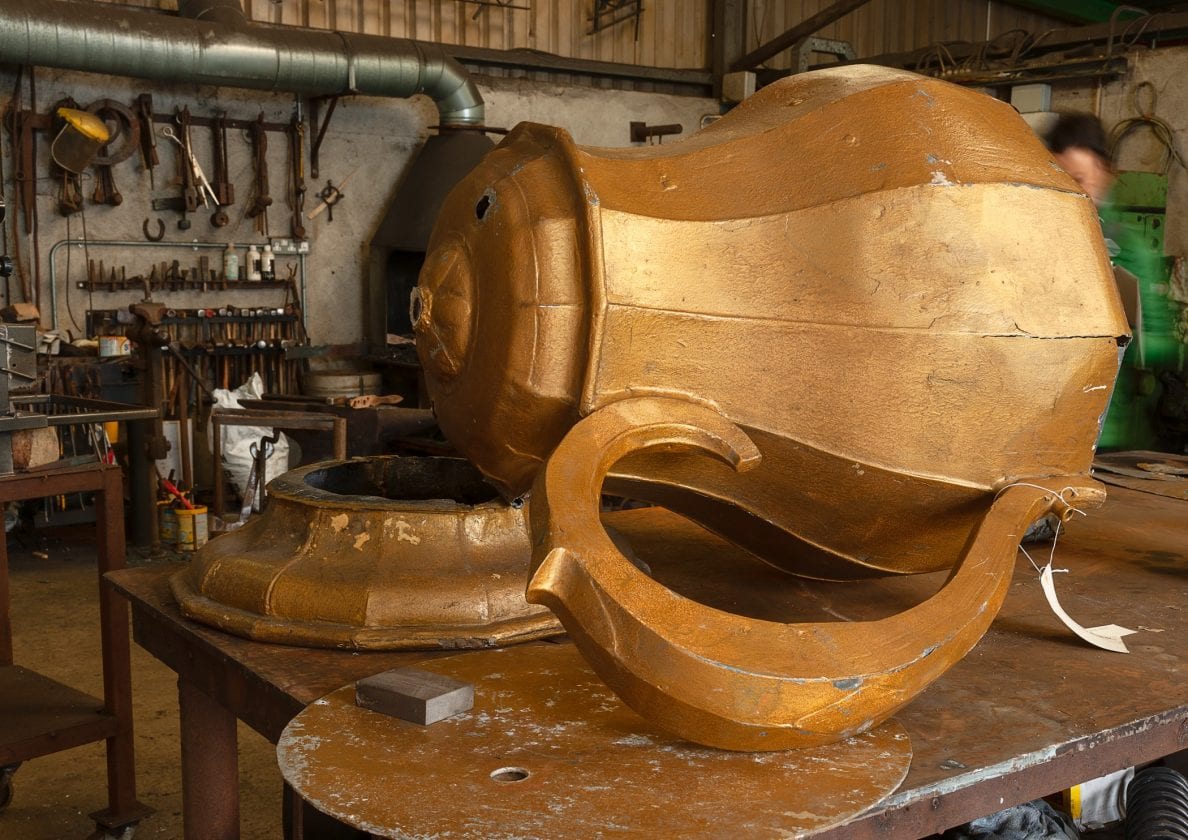 This first picture shows work ongoing to restore Armagh’s famous Golden Teapot as specialists prepare to bring the long-gone local landmark back where it belongs.

As Armagh I exclusively revealed on Monday, the teapot is to be erected outside Wrights Interiors and Coffee Shop at Russell Street.

It first appeared almost 150 years ago and will return as part of the Townscape Heritage Initiative planned for Armagh.

The teapot was first erected above premises in Scotch Street, where it remained for over a century until it was donated to Armagh County Museum nearly 20 years ago.

It has hung over James Irwin Grocers and the old CB Cafe, at Scotch Street, which was where T G Hawthorne’s furniture store is now. It has been located too over Hanson’s Flower Bowl International, when it previously operated a cafe facility at upper floor level.

Armagh City Townscape Heritage Partnership – working in partnership with Armagh County Museum – has provided the opportunity for remedial conservation work to be carried out to restore this iconic symbol of Armagh’s commercial heritage.

Subject to planning permission, the treasured teapot will be located in Russell Street.

He said: “The return of this landmark to the city centre will be very much welcomed as it was an iconic part of Armagh’s history which people of the city will remember, particularly the older generation.

“The teapot was the Victorian equivalent of a marketing technique which was quickly embraced by other traders in Armagh at that time, like the ‘Golden Canister’ and the ‘Giant Boot’ outside the bootmakers’ in Thomas Street.

“Armagh County Museum is delighted to work in partnership with Armagh City Townscape Heritage Partnership to bring this treasured gold back to life for local people and visitor to enjoy for years to come.”

The ‘Golden Teapot’ was originated by James Irwin in 1870, who used the teapot to attract customers to his family grocery store and café on Scotch Street.

A newly established firm of Armagh plumbers, Donnelly and Sommerville, were commissioned to make the gigantic teapot and much of the work seems to have been carried out by James Robinson.

Robinson was ideally suited to the job of carefully cutting and soldering the zinc metal plates that make up the teapot, for he was the Town Commissioners’ ‘Waterman’ and skilled in working with metal.

The sign hung on Irwin’s premises in Scotch Street for many decades where the spout proudly puffed steam to attract customers to his shop and the City Bakery Café which thrived on the first floor.

The Golden Teapot disappeared from Scotch Street in the 1990s, however what many people don’t know is that it was donated to Armagh County Museum and has been carefully preserved in the museums climate-controlled stores since then.

The painstaking work is currently underway and being carried out by Ruth Bothwell of Decowell and Gerard Loughran of Ballinliss Forge Works, Camlough.