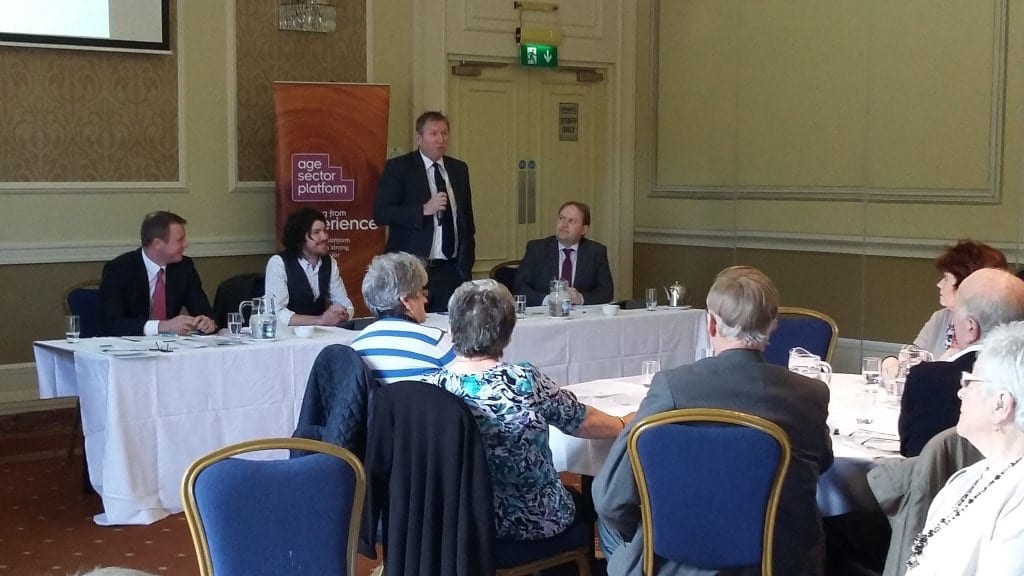 It is fair to say the population or Northern Ireland is getting older but it is not fair to say that this is a burden on society – quite the opposite.

Older people contribute to our society in so many ways; financially, academically, socially and of course we have pensioners in all levels of government.

I recently attended the Pensioner Parliament at Armagh City Hotel as one of the panellist for the afternoon discussion.  During that discussion their Manifesto was outlined and I have to say I was shocked. Not shocked because they demanded so much but shocked because they asked for so little and what they currently have is not guaranteed.

At the moment over 60s receive discounted travel and of course they receive free prescriptions, like everyone else Northern Ireland. Older people account for over 50% of all prescribed medicines and they would ask for these entitlements to be protected.

Of course there is a cost to this, however this cost must be viewed in the long term and not in the short term.  As it stands now, Appreciating Age calculates that over the next 50 years older people will be net contributors to the Northern Irish economy in the region of just under £50 Billion. This figure takes into account the associated costs specific to older people. However this is far less than the financial contributions they make as well as the other valuable contributions such as volunteering, caring, childcare and replacement parenting.

Some would say we could save even more money by means testing older people for prescriptions and Smartpasses, yet this would in itself cost more money. Not only would it not save a significant amount but it would lead to older people not applying for the Smartpass, which in turn would lead to a less active lifestyles, less footfall in our town centres and more associated medical costs.

Many older people in Northern Ireland, about 25% or 72,000, live in relative poverty. For them there is a yearly choice to be made; heat their home or eat. Many revert to heating just one room in the house and remain in that room; virtual prisoners to poverty. They are not alone in this but older people are more susceptible to the cold, illness and hypothermia.

There are various schemes to help older households such as the Affordable Warmth Scheme. Unlike the Warm Home Scheme it has an area approach, proactively seeking out those who could benefit from the scheme, as opposed to waiting for applications which older people are less likely to make.

Then there is the question of the Warm Homes Discount Scheme worth £140 a year providing a direct electricity bill rebate. This scheme is presently operating in England, Scotland and Wales but not in Northern Ireland. While this sounds completely unfair the relatively small market in Northern Ireland coupled with the fact the costs of the scheme are passed onto those not normally eligible, it would have a disproportionate impact on customers. In simple terms the cost of the scheme is borne by those not eligible for it. So where the Pensioner’s Parliament ask for equality in discounted energy bills it should be up to the Northern Ireland Assembly to deliver that equality. If that is through Affordable Warmth then it must be a ‘Whole House Solution’ targeting the nearly 58% of older households who are in fuel poverty.

Many of these issues could be tackled if we went from an applications system of awarding pensioners benefits to a credit system where pensioners are automatically paid what they are entitled to. Each year over £200 million goes unclaimed by older people, money they are entitled to and money that could make a huge difference to their quality of life. Yet their pride in asking for benefits is exploited by a system that knows older people are less likely to apply.

Answering questions from the floor, it was clear older people want to play their part in society. They are politically active, have incredible civic pride and a longing for Northern Ireland to be a better place for their children and grandchildren. They want dignity in their health and social care and they want to be valued for their contributions past, present and future.  Above all they want to be represented and treated fairly with age discrimination in goods, facilities and services tackled so they no longer feel alienated and isolated.

Older people ask for so little but give so much. Sitting with me in the panel were representatives of all the major political parties. Each of them agreed that more must be done to give older people peace of mind for the future; it will be up to the new Assembly to deliver on that promise.

Doug Beattie MC is an UUP Councillor representing Portadown and a candidate in May’s Assembly elections.