'They certainly did themselves, families, communities and country, very proud' 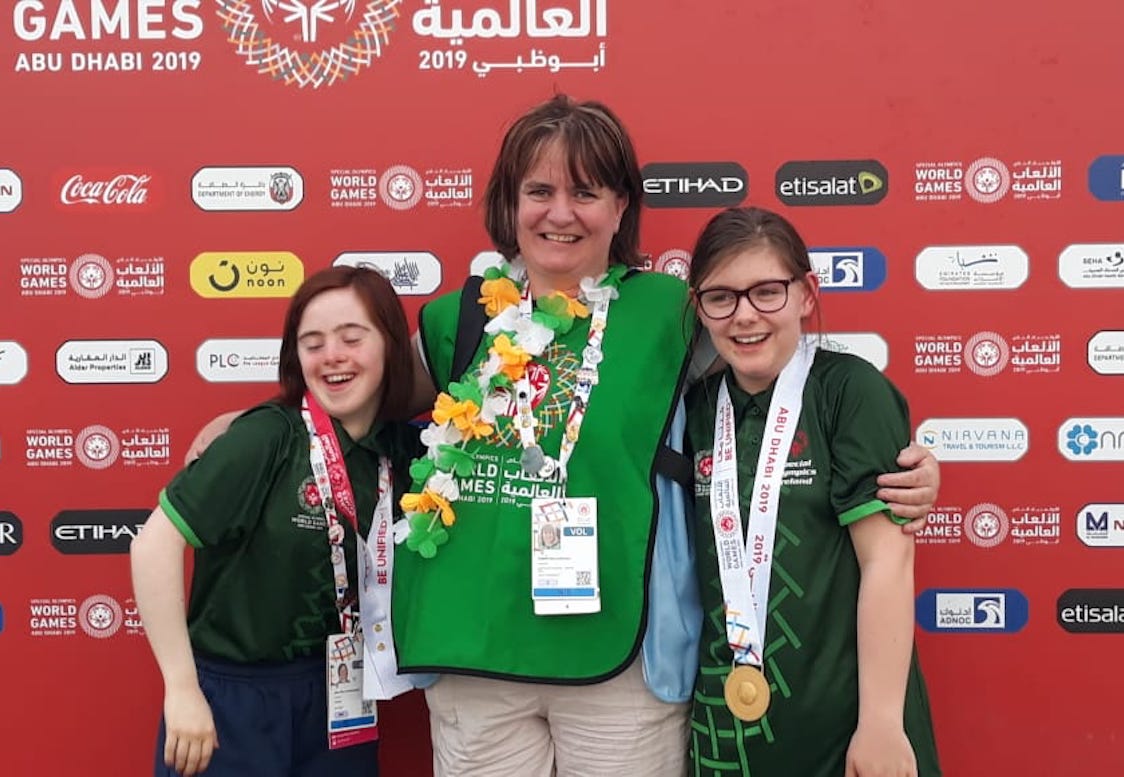 An Armagh woman who volunteered with the Special Olympics Team Ireland squad has spoken of her “amazing experience” and pride in all of these talented sports stars.

She was one of more than 70 volunteers who travelled alongside 91 athletes competing in 12 sports, including Athletics, Swimming, Football, Bocce, Ten Pin Bowling, Golf, Table Tennis, Equestrian, Kayaking, Basketball, Gymnastics and Badminton.

For Niamh, she was on the media team for the football.

Team Ireland enjoyed great success at the Games – returning home with a huge haul of 86 medals, including a gold and silver for Bessbrook’s Megan McElherron in equestrian.

Niamh has described her experiences as the “trip of a life time” and said being able to “support the best team in the world was an extra bonus”.

Here for Armagh I, she recounts her experiences: “Team Ireland flew out on Thursday, March 7, and enjoyed a number of days in Dubai as part of the host town programme.

“They travelled to Abu Dhabi and took part in the Opening Ceremony which was held in Zayed Sport City stadium.

“Their entrance into the stadium was met by rapturous cheers and applause by the crowd, which included  members of the UAE Royal family, hundreds of Irish family members and 74 Irish volunteers.

“It was a memorable night for everyone. But it was early to bed as the hard work began on Friday.

“And by all accounts Team Ireland was certainly up for this challenge that lay ahead.

“Every round, race, match or game was played to a very high intensity and not without last minute winners or nail-biting moments.

“I was Volunteering at the Football and Ten Pin Bowling. Both were held in the Zayed Sport City Complex.

“The Boys in Green played three tough games in group stage and got to the Bronze medal match to beat Estonia 7 – 2 – and then the celebrations began!

“The Bowling Team compete in Team, Singles and Doubles and came home with a selection of medals, including a gold and silver for Amy Delaney, from Derry, who at 16 is the youngest on Team Ireland.”

Other local heroes included Richard Currie, 23, from Dungannon 2 Gold and a silver in Bocce, Patrick Quinlivan, 36, from Donegal 2 Gold and 5 silver in Gymnastics, Sarah Louise Rea, 19, Lisburn, Gold in Badminton, Shannon Nixon, 21 , Bronze in athletics, Megan McElherron, 18, from Bessbrook , 1 gold , 1 silver in Equestrian , Conor Clorey, 21 , from Newry, a bronze in Open Water Swim, Peadar Connolly, 32 , Newry, Silver in 200 Backstroke and in doing so beat his personal best by 8 seconds, Fergal Gregory, 19, from Cloghogue , Co Armagh, a Bronze in Kayaking.  Jill Connery from Scarva collected a 4th place ribbon in golf.

Said Niamh: “They along with the rest of Team Ireland were absolutely amazing. They certainly did themselves, families, communities and country, very proud.

“The Irish support at the Games was fantastic. Home-made banners, T-shirts and a few rounds of ‘Ole, Ole, Ole’ were there order of the day, not to mention Abu Dhabi turning green on St Patrick’s Day!

“Team Ireland arrived home on Friday with noise levels at fever pitch at Dublin Airport with extra luggage of 86 medals – 30 Gold, 29 silver and 27 Bronze and many ribbons, personal bests and life-long friendships too.

“My love and involvement with Special Olympics Ireland will continue to grow and I encourage any to get involved in some way. You will not regret it. My only regret is that I didn’t sign up sooner.

“The All Ireland Special Olympics At Collection is taking place on Friday, April 5. I am co-cordinator for Armagh, so if any one is available to help out even for one hour that would be fantastic. They can contact me at Dobbin Street Community Centre.

“Come and help the athletes of the future achieve their dreams and goals!”