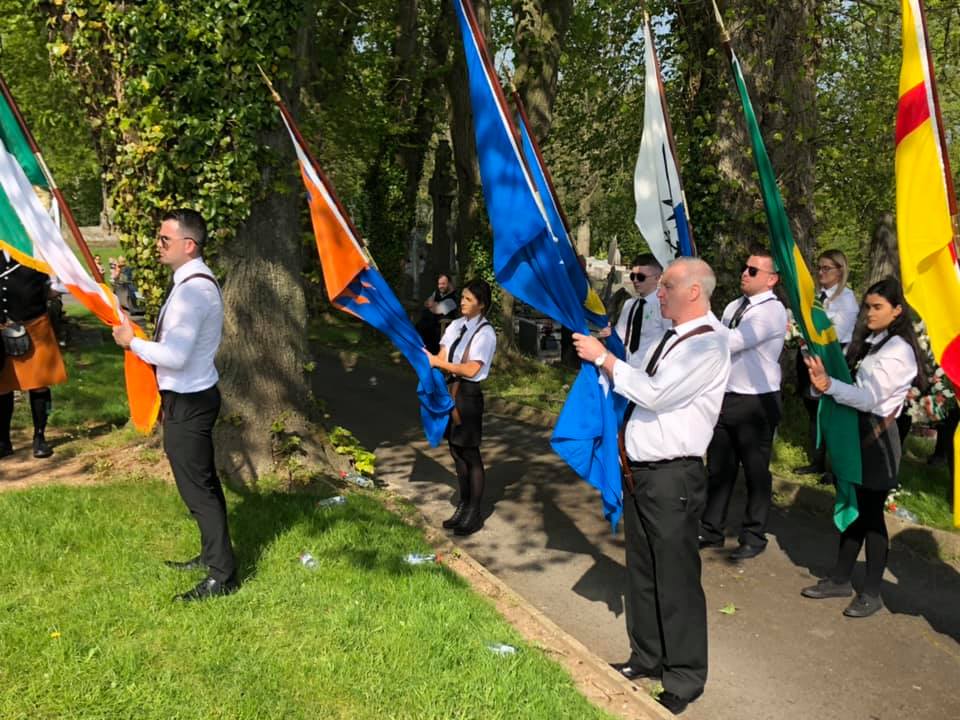 Republicans throughout the Newry and Armagh Area turned out in large numbers at events throughout the district to remember the Easter Rising of 1916 and also pay tribute to all of those who, in every decade since 1916, stood by Ireland and stood by the Republic.

Speaking at Mullaghbawn on Easter Saturday Evening Sinn Féin Council Candidate for the Slieve Gullion area Oonagh Magennis told the large presence that it was fitting to,

Speaking at the Ceremony in Dromintee Cllr Mickey Larkin told those present,

“We gather here, as people are gathering throughout our country at this time, to remember our patriot dead, and to recommit ourselves to the cause for which they struggled – Irish freedom, Irish unity, and a 32-County republic based on equality and social justice”.

On Easter Sunday morning in Crossmaglen Newry & Armagh Sinn Féin MLA Megan Fearon joined the large Parade to the Republican Plot where addressing those gathered she said: “Partition not only divided our island and our people. It created two conservative states and economies, controlled and run in the interests of privileged elites North and South.

“As we mark various centenaries over the coming years, we need an honest appraisal of the reactionary nature of the two states that emerged, and how this continues to impact on the people of Ireland today.

“Inequality was at the heart of the two partition states and we continue to live with that legacy.

“Irish Republicans in 2019 are as determined as those in 1919 to realise the vision of the 1916 Proclamation and that of the First Dáil – an independent, united Ireland and a real republic built on the foundation stones of equality and social justice for all citizens”.

Commenting on the current Brexit concerns, the south Armagh elected representative stated: “The people of the north voted to remain in the EU. That vote should be respected. The decision to drag them out is undemocratic.

There is no good Brexit, There is no opportunity or upside. Brexit undermines our hard won agreements, rights and prosperity of citizens”.

The MLA also said that a United Ireland was within grasp.

“Republicans need to prepare now for a referendum on a United Ireland. To win it, we need to reach out and work with people from all identities and persuade them that their interests are best served in a United Ireland”.

“In the local elections, North and South, Sinn Féin seeks a renewed mandate to represent our communities.

This is a hugely important election. There is a lot of work to be done. There are many doors to knock and many conversations to be had.

We need to run energetic campaigns and ensure that voters know exactly what we stand for and what we offer.

We can elect an increased team of Sinn Féin councillors across Ireland to deliver equality and progressive change that makes the lives of all those we represent better.

And what we pledge is that no one will work harder than your local Sinn Féin councillors.

Working together, and with the support of the people, North and South, Sinn Féin will realism the revolutionary vision of An Chéad Dáil.

Together, we will build a United Ireland and a Democratic Socialist Republic”.

“Let me take a moment to address what happened in Derry city in recent days with the brutal murder of a young woman and journalist, Lyra McKee.

The people who brought guns onto the street, and those who organised them do not represent any version of Irish republicanism.

They have no politics, no strategy, and no popular support amongst the vast number of ordinary people from Derry, or anywhere else in our country.

These groups should disband and end their futile acts of violence.

We extend today our sympathies and condolences to Lyra McKee’s family and partner, her friends and her colleagues”.

The MEP said that huge challenges are now faced.

“Today we are facing the greatest change in Irish politics since the Good Friday Agreement of 1998, not least because of the unwanted Brexit being foisted upon us.

Brexit undermines our hard-won agreements, rights and prosperity of citizens.

Sinn Féin have said that Brexit belongs to the British and if they wish to leave the EU good luck to them, but the Good Friday Agreement belongs to Ireland.

We will defend our national interests at every turn.

Sinn Féin has worked to protect the Good Friday Agreement, citizens’ right and to prevent any hardening of the border.

The Westminster parliament is complete chaos and Sinn Féin won’t send republican representatives to be part of that mess.

Now is the time to look to the future and to begin to plan for a unity referendum in line with the Good Friday Agreement.

Sinn Féin has been clear that in the event of a no-deal crash-out Brexit then the two governments have the responsibility to call referenda on Irish Unity under the provisions of the Good Friday Agreement, thus providing a route back into Europe for the whole of the island”

“Elections next month, North and South, provide another opportunity to further the cause of a United Ireland and the building of a republic based on social justice and equality.

Sinn Féin has major issues with the current direction of the European Union but having one part of our country dragged out of the EU against the expressed wishes of the people is a travesty.

Sinn Féin has brought Irish interests to the heart of Europe in a sustained and determined effort to ensure there will be no hardening of the border or undermining of the Good Friday Agreement.

The EU election is an all-Ireland election.

It’s another opportunity to return an all-Ireland Sinn Féin team to Brussels to fight for Ireland’s interests, to oppose any hard border in Ireland, the neoliberal agenda, federalisation and the creation of an EU army.

Sinn Féin MEPs will stand against the transfer of further powers from Ireland to Brussels, against dangerous EU trade deals and increased militarisation”.

‪Easter Sunday marked the 50th anniversary of the Republican plot at Ballymacnab. It was unveiled in April 1969 by former Sinn Féin MP Tom Mitchell.

A local Republican activist at the time, Rita McNally later recalled, “there was something in the air and a movement among the youth”. Within months, the IRA were to reemerge onto the streets to further Ireland’s struggle for national liberation as Loyalist attacks on nationalist homes intensified.

Each year since 1969, the local Joe McKelvey pipe band has led the parade, the band was formed in the 1920s and continue to play at local community events.

Elisha also commenting on the recent tragedy told those in attendance,

“There is shock and sadness in the community following the reprehensible killing of young journalist, Lyra McKee. The so-called dissidents responsible for this senseless killing offer nothing to our communities.

“The murder of Lyra McKee is an attack on all the people of this community, an attack on the peace process and on the Good Friday Agreement. We will remain resolute in our opposition to the pointless actions of these people who have claimed another life. I urge all to stand together and send a clear message that this killing is not in our name.”

Ireland is again at a point of great change. The orange state is gone.

The perpetual unionist majority in the north has ended.

The forces of conservative Ireland no longer enjoy the unquestioning support of citizens.

The old orange and green is now part of a rainbow of colours and identities.

And a new Ireland is emerging.

We are a changing party, a growing party.

We are a new leadership building on the legacy and work of all those who came before us.

The Good Friday Agreement provided an end to conflict and provided a peaceful, democratic alternative and a huge opportunity for us all to design a better society for ourselves and succeeding generations to live in.It was, and remains a precious gift of peace to our young people and it is indispensable.

At this time everyone knows that Theresa May’s Government is wholly reliant on the DUP to stay in power, and she is therefore prioritising this self-serving agenda over the peace and political processes”.

The large crowd heard the Sinn Féin MP state that her and her colleagues were ready to enter any Talks process that is serious and credible.

“All roads will lead back to the negotiating table and we stand ready to enter any Talks process that is serious and credible, which confronts the issues which need resolved in order to have proper power-sharing Government which commands public confidence.

This includes respect for our Irish national identity and citizenship, including our language, and other important matters.

This includes dealing with the past where they are attempting to protect British State forces and deny truth and justice to the many families who lost love ones at the hands of the British army and Crown forces during the conflict.

It is beyond time the British government implemented the legacy mechanisms agreed at Stormont House in a human rights compliant manner.

If we are serious about dealing with legacy then we must ensure that families no longer have to pursue due process in this long drawn-out manner. It is a disgrace that families are still waiting on truth and justice.

Sinn Féin will continue to stand with all families in their pursuit of truth and justice for their loved ones.

Concluding Elisha said there would be no going back.

“When Martin McGuinness resigned he said that there will no going back to the status quo.

“Sinn Féin is wholly determined to deliver on his word.

“Despite the current political vacuum a new Assembly and new type of politics is possible.

“The onus is squarely on both governments to remove the obstacles to restoring the Assembly.

“There is no going back. We must only go forward”

“The Local Government Elections on May 2nd come at a pivotal time in our political process.It’s your opportunity to stand against Brexit and the DUP/Tory toxic pact which is poisoning our politics locally and continues to deny people their rights.

A strengthened Sinn Féin vote is the best way of combating this destructive agenda.

Integrity and genuine power-sharing are not negotiable. They are essential.

Sinn Féin want a new Ireland based on equal treatment and rights for all citizens.

Sinn Féin is the only party capable of delivering this future.

We are building it every day.

In every corner of Ireland.

In communities, in council chambers where we deliver for all citizens and all communities.

Sinn Féin Councillors, the hardest working political activists on the island of Ireland, will continue to provide first class representation for communities in every council area in Ireland

On 2nd May the people across the North have an opportunity to come out and vote for this new Ireland”.

The organisers of all events wish to thank those who helped ensure that each Parade and Wreath Laying ceremony was a dignified and fitting tribute to the memory of our patriot dead, in particular the guest speakers, All Colour Party personnel, the Bands in attendance,Republican ex prisoner Groups, Sporting, Cultural and Community Groups, those who participated in local pageants, the Stewards, those who provided PA systems and refreshments.

Finally míle buíochas to the many thousands of women, men, young and old who attended the Easter Rising Commemorations throughout the Newry & Armagh area.