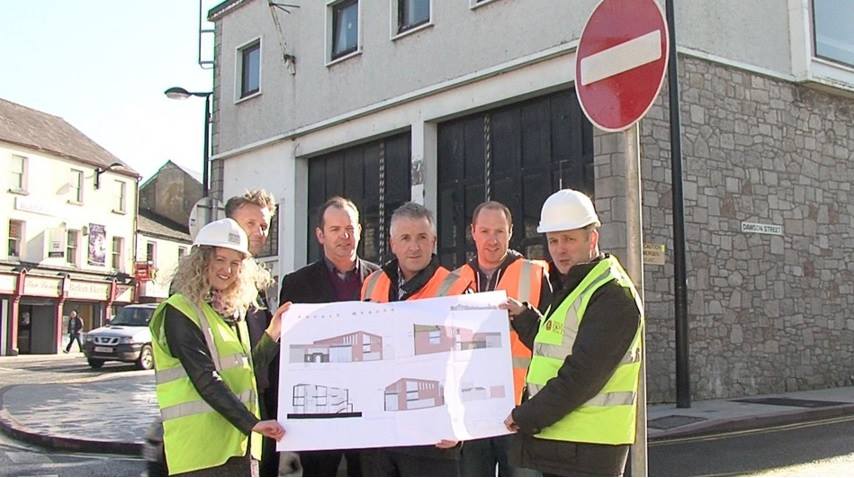 Work on Armagh’s new Irish language centre on the site of the former fire station is due to begin in January.

And, if all goes to plan, it will be officially opened in March 2018.

For now, Cairde Teo are appealing for the public to vote to help securing funding from the Ulster Bank/RBS ‘Skills and Opportunities Fund’.

The group are part of a consortium that successfully tendered for the former fire station site in the Shambles area of Armagh when it was released for public tender back in 2013.

Now members are seeking assistance for the rollout of a cultural enterprise training programme for enterprises, community groups and motivated individuals who are interested in establishing a new business or service within the Aonach Mhacha Arts and Cultural Centre at the Shambles corner.

Invitations to tender for the lucrative £1.3 million contract to build the state-of-the-art new cultural centre have now been issued to contractors and building is expected to begin in January 2017.

The existing building will be entirely demolished, marking the end of an era for the old Sherry’s Garage/Mini Shambles and fire station that occupied the site since the 1960s.

Rising in its place, an attractive new three-storey contemporary building, designed by local firm DA Architects, will be erected.

The new building will be mixed use with a combination of retail, office, educational, craftwork and catering units.

The building will also be home to a media suite, performance space and a new Irish medium nursey school.

To crown it all, a roof top garden will offer a vista for meetings, recreation and play with a superb view of the surrounding city.

The building will be officially opened as part of Seachtain na Gaeilge – Irish Language Week – in March 2018.

Cairde Teo are appealing for your help to secure funding for this exciting project that has the potential to create new jobs and opportunities in the vibrant and expanding cultural tourism and Irish language sector.

A spokesperson said: “In these challenging times of economic uncertainty and government cuts, your help could be vital in attracting capital investment and new job opportunities to Armagh City.

“So get voting now and encourage your friends, families, neighbours and colleagues to do likewise.”

The public voting site is now open at http://skillsandopportunitiesfund.rbs.com/vote.html.

The vote will close at NOON on Friday 4 November 2016.