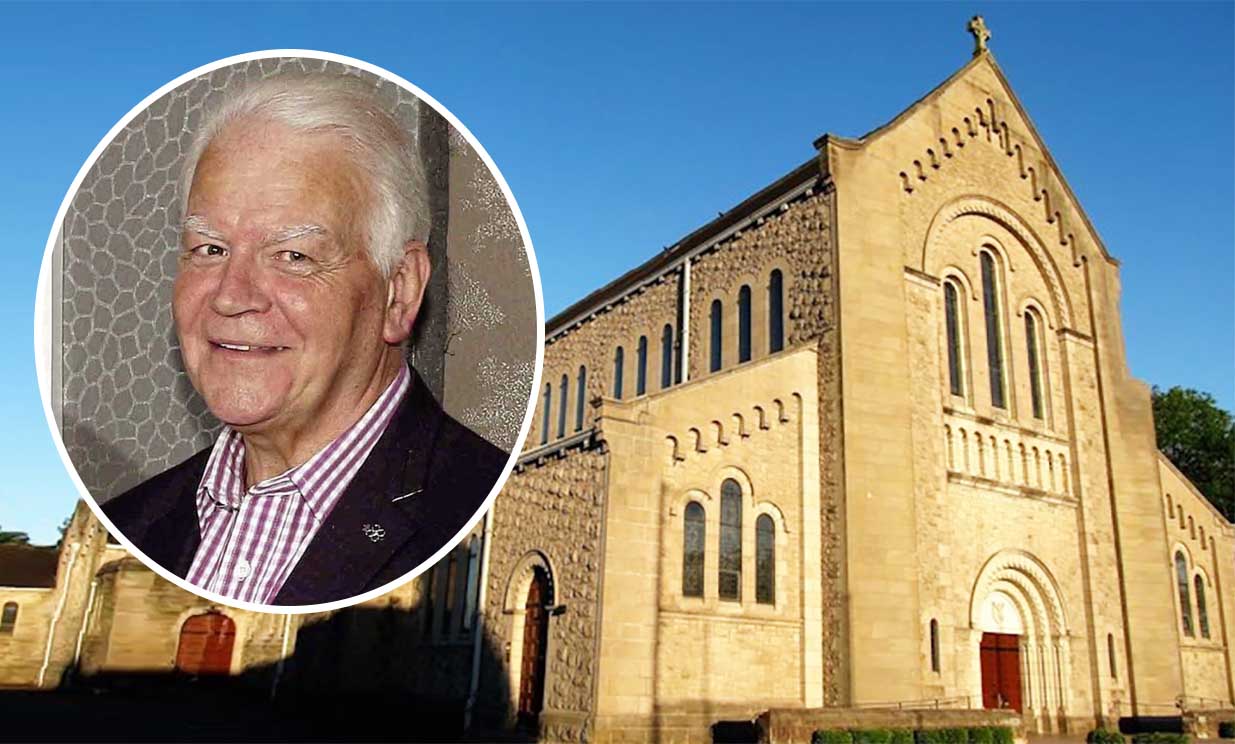 Mourners at the funeral of the hugely-respected Armagh sporting great John Morrison have heard him described as an “honourable man” and one who “brought happiness to so many people”.

John passed away on Tuesday, sending shockwaves across the city, the county and far beyond, where his influence and his wisdom, his friendship and his vision, have been felt, and will prevail, for many years.

Hundreds attended Requiem Mass in Armagh on Saturday morning, a huge testament to the popularity and love for a man whose many roles in life touched countless numbers.

From the sports field to the field of education, and his work as a sporting journalist and columnist, one would have to travel far to find a place where the name John Morrison was not known and held in such high regard.

The funeral made its way from his home at Cathedral Road to St Malachy’s Church at Irish Street in the city, later to be followed by interment at St Patrick’s Cemetery.

Family and friends of the Armagh man – known affectionately as ‘Beefer’ – led mourners as Fr Kerr looked back on the life of someone whom he had first met through John’s famed work with the youth in his cherished home city.

Sympathy was offered to John’s loving wife, Maura, daughters Emma and Catherine, sons Patrick and Sean, and their families, and sister May and her family, who had travelled from Manchester for the Requiem Mass.

He said John’s passing had come as a “great, great shock”.

He said many of his past pupils spoke fondly of their memories of John and added: “Encouragement and understanding were the hallmarks of his teaching methods.”

Mourners were told how John and his good friend, the late Enda Kirk, had run the youth club in the Parochial Hall in Armagh.

He said it was an era when there were less facilities for young people and during the time of the Troubles.

“For a few hours and many evenings during the week John and Enda brought many young people into the hall to get them involved in other pursuits,” he said.

He told how he had played in “both codes”, gaelic football with Armagh Harps and soccer with Armagh City.

But he added: “It was when he hung up his boots that he made his greatest contribution to sport as a coach, trainer and manager.”

His contribution, he said, was “immense and much appreciated” and, while not everybody agreed with his methods, Fr Kerr said they understood.

Fr Kerr said there was nothing underhand or unsportsmanlike about him, describing John as “an honourable person”.

“He played an honourable game,” he added.

All present were also told of John’s work as a journalist, one who had covered “club and county, league and championship games in the Armagh Guardian”.

He turned then to 2006, when John and Mickey Moran brought Mayo to the final of the All-Ireland, within one game of capturing the Sam Maguire, describing it as undoubtedly “his greatest and proudest achievement”.

Moving from his passion for sport, Fr Kerr said: “Away from the madding crowd, he was a family man, first and foremost.”

He was, all in all, a gentleman who “brought happiness to so many people”.

Offertory gifts brought to the altar reflected all that he held so dearly, football jerseys, from Armagh Harps and Armagh City, a picture of his family, the Morrison tartans and his family tree.

Reminiscences were made on behalf of Armagh City Youth Club in the 1970s and the 80s, and the work which John and his wife, Maura, had undertaken with the young people during dark days, each Tuesday and Thurday night, and the annual trips to the Isle of Man.

He was described as “a mentor, a motivator, teacher, confidante, guide and friend”.

John’s eldest son, Patrick, during the communion reflection, read a poem which he told mourners he had composed on the night his daddy had died, when he was unable to sleep.

It referred to John’s gift of light and how it had shone in the lives of the people he influenced, containing the lines: “When the years fly by and away from this day, I hope that my light has guided your way.”

And Patrick, in conclusion, said he would leave them all with the words of his father, adding: “I can’t wait for tomorrow because I get better looking every day.”

As the Requiem Mass concluded, it was the most perfect musical choice which rang out around the beautiful church of St Malachy in Armagh as mourners followed John’s coffin outside.

Happiness, the song made famous by the late comic Ken Dodd, could not have been more fitting.

“Happiness, happiness, the greatest gift that I possess,
“I thank the Lord that I’ve been blessed,
“With more than my share of happiness…”.

On behalf of Armagh I we offer our sincere condolences to John’s wife, Maura, sons Patrick and Sean, daughters Catherine and Emma, and the entire family circle at this time.