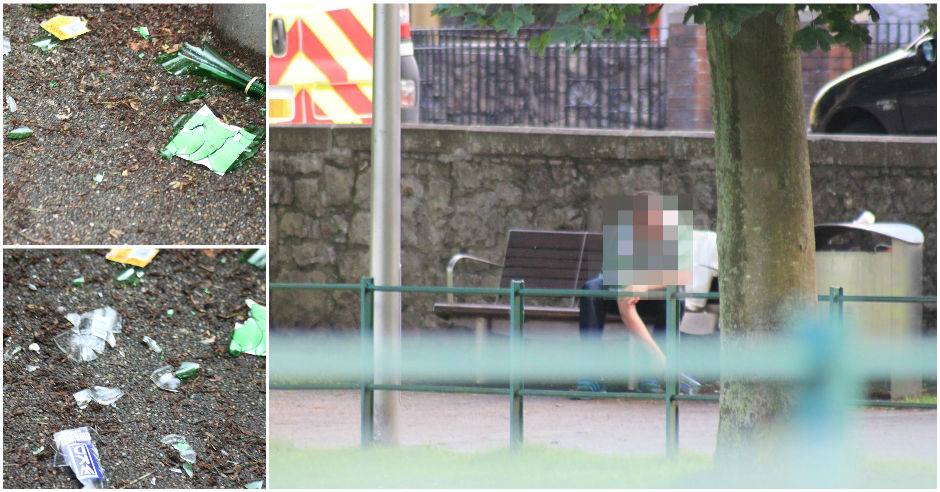 The public path around the inside of the Mall was left strewn with broken glass this week – despite an ongoing campaign to stamp out anti-social behaviour.

The PSNI has stepped up its patrols in the area and last week arrested a man for indecent behaviour, as well as seizing alcohol.

The heightened police presence comes after a meeting involving the PSNI, Armagh City, Banbridge and Craigavon Borough Council and the Mall Trustees.

It was called after Armagh I reported how a woman and her three young daughters were left shocked and disgusted after a man exposed himself and urinated as they walked around the city centre park.

It was agreed to install signs declaring ‘no drinking in public places’ to alert people to the bylaws.

Consideration is also being given to a ‘Park Watch’ scheme.

And more bins are planned for the Mall to deal with the problem of litter.

Despite all of this, Armagh I has been provided with photographs which show there is still a blatant disregard by some to allow the general public – including those with young families – to enjoy the Mall. An Armagh man contacted us after our recent campaign to highlight the need to ‘Take Back The Mall’.

He has provided photographs which clearly show a man, who appears to be in his early 20s, openly drinking on a bench on the Mall West side on Wednesday.

One image shows the same person, who is alone, take a bottle and deliberately smash it against the ground, leaving the glass lying there in the path of others – including children and dog walkers – to step through.

He does this despite the fact that he is sitting next to a litter bin.

The man who contacted us said: “I walk the Mall every day. For the past month, almost every day I have been confronted with drinkers either urinating, breaking bottles or yelling at passersby.”

He said he took the pictures and forwarded to us as the person was quite content to break bottles “in front of everyone” and had gone unchallenged.

“I have been following stories on Armagh I,” he added. “I feel outraged at Armagh community police, as anyone can see this going on almost any evening.”