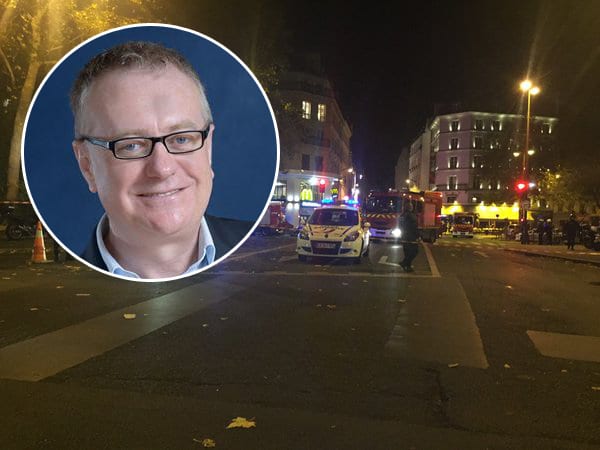 Professor Gray was tweeting live from the scene where he was witnessing the unfolding horrors first hand last night.

Speaking to Armagh I, he said: “I was watching the Ireland match in a bar. When I was walking out I saw all these lights and then someone had text me to say there were shootings in Paris and that it was near La Republic.

“I knew I was staying there and the next thing there were are all these sirens and lights and as we walked up we realised everything was cordoned off. Professor Paddy Gray (inset) from Armagh at the scene of the terrorist attacks in Paris, France

“We stood at these traffic lights and didn’t know what to do and next thing a van pulled up with police telling us to run so we all ran down one of the streets. We ended up in an entry with four or five other French people and we just sat there for about half an hour in the dark.”

He added: “Next thing this gentleman took us into his house. We can’t get back to our hotel.

“It was panic, total panic. I didn’t now what was going on. I was tweeting, taking photographs and didn’t really know what to do until the van was abandoned and told us to run.

“I was a wee bit shaken but I’m okay now. I’m slowly getting bits and pieces of information.”

I don’t know what’s going to happen now. Most people around me speak French and I speak a little but with an Armagh accent so I don’t know how that will go down. People are a little more relaxed but they are constantly watching the news.”

“It was so nice of the the man to bring us in..all seven of us.”

Robert Normand who gave up his house tonight to keep us safe in Paris la republique @BBCRadioFoyle pic.twitter.com/l483sWkgPR

France has declared a national state of emergency and has closed its borders after scores of people were killed in multiple gun and bomb attacks in Paris.

Reports of at least 100 people deadat the Bataclan concert hall in central Paris.

Gunmen took many hostages there before being overpowered when police stormed the building.

Others died in attacks near the Stade de France, with some reports suggesting a suicide blast, and at restaurants.

Paris residents have been asked to stay indoors and military personnel are being deployed across the city.