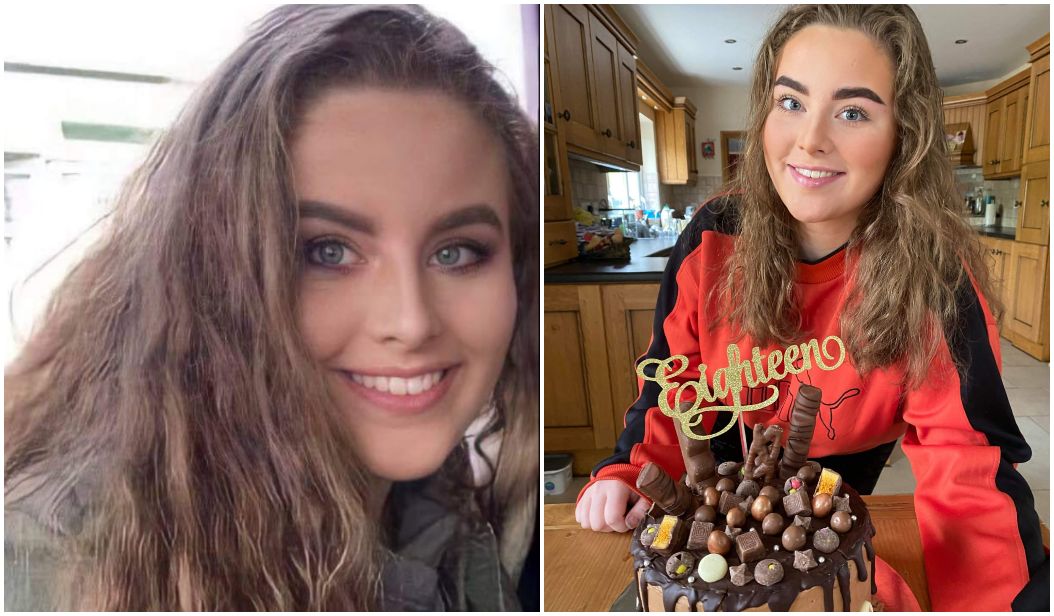 The mother of a Co Armagh teenager who tragically lost her life a day after arriving at university in Newcastle says her daughter “worked so hard and achieved so much in her short life”.

Jeni Larmour, along with her mother Sandra, travelled across from Newtownhamilton, to the city on Thursday, October 1, 2020.

Jeni, “bouncing with excitement”, as her mother describes it, picked up the keys for her accommodation on the Friday afternoon.

The next morning, hope of a new dawn for her daughter had turned to despair for Sandra who received the dreaded call, “knowing in my heart that if the police were phoning me it wasn’t good”.

An inquest into Jeni’s death found she had died as a result of taking an unknown substance.

This morning (Wednesday), Kavir Kalliecharan, 19, of Coleridge Close in Leeds, who was one of eight people found in the student accommodation where 18-year-old Jeni passed away, pleaded guilty to possession of MDMA, ketamine and cannabis.

He was handed a conditional discharge, which Sandra, speaking to Armagh I after the hearing, described as “basically a slap on the wrist”.

Crown Prosecution solicitor, Lesley Burgess, told Newcastle Magistrates’ Court how a search of the property was carried out and that in the defendant’s room there were quantities of MDMA, cannabis, and ketamine found.

Along with the drugs there was other paraphernalia, including sealed plastic bags, digital scales and a pen-knife.

Ms Burgess told the court that Kalliecharan accepted during interview that the cannabis was his, that he had brought it from his home in Leeds and that he accepted that during the incident he had taken some drugs, including ketamine and MDMA. Furthermore, he accepted he had put those drugs in various places within his room.

Kalliecharan’s defence solicitor, Michael O’Garra, told the court that his client’s family – his mum and dad, who came to the hearing with their son – were “racked with guilt” at what had happened.

Detailing Kalliecharan’s version of events, Mr O’Garra, said: “Kavir’s parents dropped him off at the university accommodation at 4pm on the Friday afternoon. He unpacked his things; his university told them in advance who their flatmates were likely to be and they exchanged details so they were able to communicate by social media. They arranged to go out that night.”

He added: “Jeni, as I understand it, came up to university a few days before that in order to acclimatise to the accommodation. The students met up and decided to go out to a pre-booked public house in the centre of Newcastle.

“They went there and it was at that point Jeni realised she didn’t have her ID with her to get in. Kavir offered to go back to the accommodation with her. They had separate rooms in the flat and he went into his room in order to use the toilet. Shortly after that Jeni went in to the room and brought with her some drugs; she brought with her the ketamine and the MDMA.

“She showed it to him and asked him if he would like to have some. He said he had never tried it before. She produced an ID document which he describes as a green document. She put two lines and demonstrated to him how that drug could be taken.”

Mr O’Garra said his client only managed to take “half of his allotted dose”, that he “immediately didn’t like it and felt ill”.

He continued: “Jeni took her allotted amount and finished off the remainder of that drug. Immediately Kavir felt ill and he went back to his toilet – he felt his stomach was crushing and that he was going to vomit. In fact, he passed out.

“It wasn’t until 5am the next morning before he came around and he found Jeni, tragically, lying upon his room floor.”

The defendant described Jeni as being “cold”. Mr O’Garra said Kalliecharan “immediately raised the alarm, spoke to his housemates and started to perform CPR”.

“In those horrific circumstances, this young man did at least all he could, or as was appropriate in this circumstances,” he added.

“He accepts the cannabis was his; Jeni asked him if she could leave the drugs with him before they went back out again because that was their intention but tragically and horrifically that didn’t happen.”

Kalliecharan was kicked out of his accommodation and degree course but his solicitor informed the court that he was due to start studying politics in York this coming September, adding that the incident had “affected him deeply”.

Hitting out at the “one-sided” nature of the case, Sandra Larmour said it was “very frustrating to hear the solicitor paint an innocent picture of this guy”.

“The pure fact of the matter was he was trying to say Jeni had arrived in the city a couple of days beforehand, so what he was indicating there was Jeni had opportunity to get her hands on drugs which was simply not the case,” she added.

“Jeni had no opportunity and I know she had no opportunity because she was with me every single second, from we arrived in Newcastle on the Thursday, until I left her at the university at 4.40pm on Friday, so there is absolutely no way that could be true.

“I also know that in terms of her room here at home, there is absolutely no evidence she had any minor drugs or had any habits of any description. It’s a girls’ room with perfume and jewellery and fake tan. I have been through every drawer and everything belonging to her so a child that is hiding something you would come across some small detail or something that would give you some doubt but there is nothing that would cause me to doubt my daughter.”

Sandra said Jeni was so excited to go to university, “she wanted to taste city life – a girl from the country excited about the opportunity in front of her”.

“Even her friends told me that she was the only one out of them all who had all her pre-reading done, she was all prepped to get her degree started,” said Sandra.

“She was going there to learn, she wasn’t going there to monkey around. Even when she was here, we have a study in the house, she had taken that over. She studied really hard to get where she was; she really excelled in her A-Levels.”

Sandra said she found her daughter’s diary which even had all her dates for lectures marked in right up until Christmas.

“I have no doubt any child going to university will partake in the social aspect of it but she was going there to get a degree,” she said.

Sandra recalled the trip the pair made over to university – and how it wasn’t as straightforward as she would have hoped for.

“Jeni never travelled light,” she joked. “She had me carrying bags as well. Most of my stuff I had with me was hers. When we got to the boarding gate we had to put four bags into two. There are happy memories of that time; she was bouncing with excitement. Jeni had lovely bluey-green eyes, really unusual, but you could see the excitement.”

While happy memories abound, Sandra says her next trip to an airport is not one one she was relishing.

“I do remember every single second of being in the airport, the flight over. She was taking pictures out through the window; she was wanting to capture every single moment of her trip over.”

Recalling their final hours together, Sandra said: “On the Thursday night, we were tired and we got a few things, sandwiches and crisps from Tesco, and sat in the hotel room and watched a film on Netflix; we never even left the hotel that night.

“The next morning we got up and went shopping for things Jeni needed. We got to the university at 12, picked up her key, and then discovered three big massive bags of luggage, which we had couriered over, were running late so we had to go out and buy her some clothes to wear. Everything was about buying her stuff, a taxi laden with shopping. You name it, we had it. We had literally spent all day together.”

After leaving Jeni to prepare for her first night with new friends at university, Sandra went back to her hotel.

“At 10pm I sent her a message asking if all was okay,” she recalled. “She didn’t respond but I had remembered that O2 didn’t work in her room so I just thought it was that and we’d have to get that sorted tomorrow.

“I do remember pacing about the room and saying to myself ‘Sandra, there will be other nights she’ll be here on her own, wise up!’

“And I wished at that point I had done something because that was my opportunity but I was there on my own. I wouldn’t have in a million years, in a strange city, walked to the university to make sure she was okay but in hindsight, if I had have done that maybe things could have been different.”

The next morning, Sandra still hadn’t heard from her daughter.

“I went on to bed and the next morning, Jeni was always an early bird, even if she was out the night before she would have been bouncing back to the hotel about 9am because we were going to spend the day together, maybe do a bit of sight-seeing, go get the phone sorted out and we still needed to go and buy saucepans. I looked up on Argos and put a few things in my basket, so we wouldn’t be wasting time.

“About 9.30am I sent her a text message, as I would have done if she was staying over here and staying at someone’s house, asking ‘are you alive?’ It was a bit of a running joke between us and I didn’t realise at that point it would be the police getting the message.

“I tried phoning her a couple of times because I was getting anxious and then at 11.30am the police phoned me. They wouldn’t offer to give me any information and then they came to the room at 11.50am. I paced about the room, knowing in my heart that if the police were phoning me it wasn’t good.”

It was the worst news.

“She was just brilliant,” said Sandra of a daughter she loved more than anything. “She was caring, a go-getter who was good at everything. Everything she turned her hand to was done with 100 percent enthusiasm. She was deputy head girl at the Royal School in Armagh.

“She just bonded with everyone she came in contact with; she helped others out who were in need. She was generous, and worked so hard and achieved so much in her short life. She was such a bright individual.

“She got to go around Britain on the tall ships, again because she always put herself forward to do that. I remember telling her a few years back that she should grasp every opportunity that life throws at you and she did that. She had a big heart for life; she loved life.”

Kalliecharan was given a two-year conditional discharge and ordered to pay £85 costs and a £21 victim surcharge.