Heartbreak as ‘Armagh2Africa’ car broken into in Spain and £6,000 of equipment stolen

The Armagh men behind the 6,000km charity mission for the Cancer Fund for Children have spoken to Armagh I of their disappointment but are still delighted the £5,000 fundraising target is now over £10,000 - and growing! 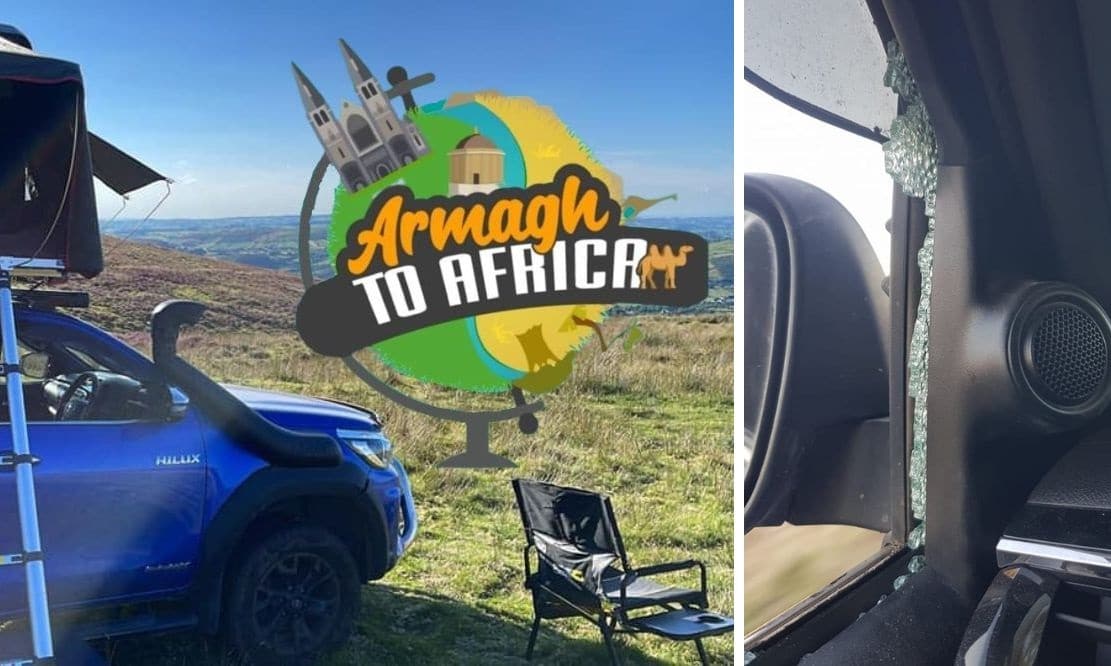 Two men who were driving from Armagh to the Sahara Desert and back for charity have spoken of their heartbreak after their car was broken into in the south of Spain.

The ‘Armagh2Africa’ duo were on the return-leg of their trip, when the car was targeted, resulting in the theft of expensive cameras and recording equipment.

‘Armagh2Africa’ was the brainchild of Armagh men Stuart McDonald and Brendan Fearon, who planned the massive road trip to raise money for the Cancer Fund for Children.

Accompanied by a few essentials and their specially modified Toyota Hilux, the duo were in the midst of their epic 6000km journey from Armagh to the Sahara Desert and back, having left Armagh on October 21.

In a post on Facebook, Stuart and Brendan – who are due back in Armagh on Wednesday – said the adventure had “come to an abrupt end”, when the incident occurred in the early hours of Saturday morning.

The break-in resulted in the theft of all of their cameras, recording equipment and digital devices.

Furthermore, cash, a credit card, and even gifts for their children were stolen.

Brendan, who is a photographer, had his business equipment taken, alongside the entire “irreplaceable” collection of photographs and videos of the trip which were stored on his gear.

Writing on Facebook, they said: “Our only solace now is looking even more forward to being with our families once more as quickly as possible.”

Speaking to Armagh I, Stuart McDonald said that they were woken up at around 2am to the devastating news.

“We had parked at the back of the hotel in Seville, and at about two in the morning we got a call from reception to say the car was broken into,” Stuart said.

“They had stolen camera equipment and other bits and pieces left in the car after smashing the passenger side window. The equipment that was stolen from us, probably between the pair of us, would have amounted to in and around £6,000.

“Through time that equipment can be replaced, but the footage is long gone.”

Despite the shock, Stuart says that he doesn’t want the break-in to overshadow the real goal behind their journey to Africa, and the experiences that they had.

“Its the best thing that I’ve ever done to be honest. The trip was first-class and we covered almost 7000 kilometres,” Stuart explained.

“It was a good adventure and we met some great people out there, so what happened is really just a minor hiccup on the scale of things.”

Although undoubtedly a set-back, Stuart is keen to point out that donations are still coming in, with the amount raised so far having smashed the initial target of £5,000 and having doubled that figure to over £10,000 as of today.

Stuart added: “The money’s all for a good cause, and hopefully a lot of people will benefit from it, then we will get a bit of comfort and good out of the money.”

Those interested in making a donation towards Stuart and Brendan’s campaign can do so here.