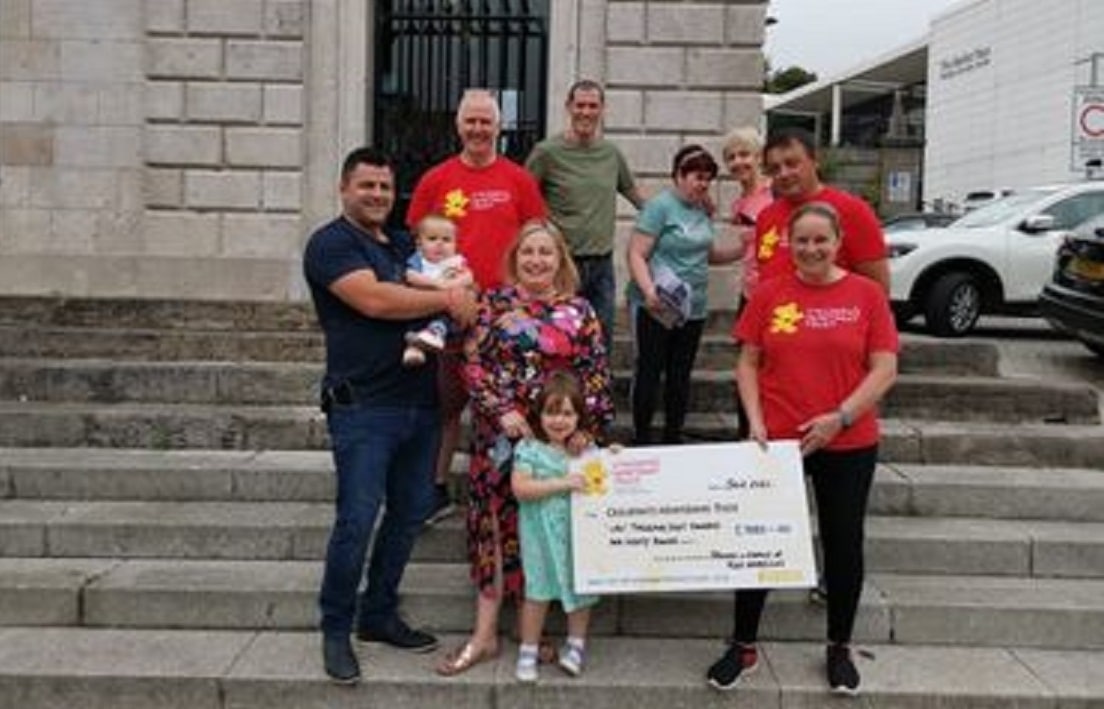 Handing over a cheque to the Children's Heartbeat Trust

An Armagh family whose son underwent open heart surgery at the age of six months has handed over a cheque for £7,880 to the Children’s Heartbeat Trust.

Little Ross Morrison travelled to Dublin to have two holes in his heart repaired – and he hasn’t looked back since.

The toddler, who celebrated his first birthday on June 9, has made a full recovery and is now living a normal life.

His dad Sean said: “He doesn’t need medicines anymore and just attends check-ups with his consultant in the Royal Children’s Hospital in Belfast.”

Sean and wife Teresa, who also have a daughter Hannah, were so thankful for Ross’s lifesaving treatment that they began fundraising and held a large raffle.

“We had lots of great prizes and sold all our tickets…and people who couldn’t get a ticket still donated,” he said.

Other local people also weighed in to help the family raise as much money as possible.

Armagh woman Jodie O’Connor and her parents Kieran and Bernie also donated the money raised from Jodie’s ‘Mile a Day in May to the cause.

“We just want to thank everyone for their love and support,” said the couple.

The Children’s Heartbeat Trust is a local charity supporting families of children with heart disease in Northern Ireland.

It works closely with the Clark Clinic at the Royal Belfast Hospital for Sick Children to ensure that children with heart disease and their families receive the best care, treatment and support possible.

Said Sean: “The charity was of great help to us when Ross was in Dublin for his surgery. They organised our accommodation and our food and travel.

“On average they send five families a week from the north down for surgery so we wanted to give back to them.

“The money raised will go towards helping other families that need to travel to the likes of Dublin for surgeries and will be used to buy specialised equipment for the wards and treatment units in the children’s hospital.

“We as a family would like to offer our great thanks to the staff both in the Royal Hospital Belfast and Crumlin Children’s Hospital Dublin for everything….what they have done for Ross no money could buy and we are forever indebted to them for the excellent care and love they show to each family and child that they look after.”

The Children’s Heartbeat Trust is funded solely by the generosity of the public and is grateful for every donation received.

For more information on the charity’s work, visit www.childrensheartbeattrust.org