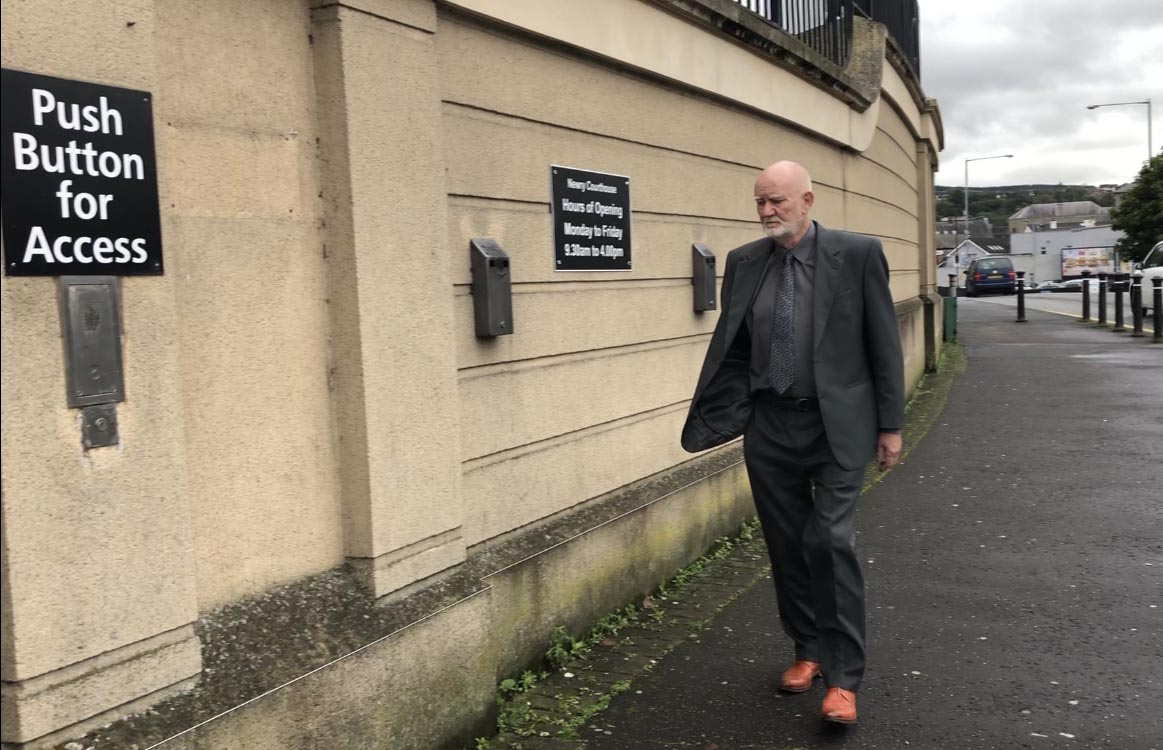 A former Armagh police photographer who sexually abused two sisters, took indecent photos of them and spied on a third victim, walked free from court with a three year probation order.

Imposing the order on 62-year-old William McConnell at Newry Crown Court on Wednesday, Judge Gordon Kerr QC said the alternative was to jail the pervert for a year but that would result in less supervision.

“Probation is the better option from the public perspective,” said the judge, explaining that a three year order meant that McConnell would be kept under close supervision and “the advantage of that would be that the court can direct the defendant to take courses to address his criminality”.

He warned McConnell in no uncertain terms however that if he breached the order in any way he would be brought back to court to have the 12 month sentence “and I can assure you that if you come back before me that exactly what you will get.”

At an earlier hearing McConnell, from Church Square in Sion Mills, entered guilty pleas to two counts of indecent assault between September 2000 and January 2096, one against each victim and two counts of having indecent images of both girls in February 2015.

On a second separate indictment which McConnell contested as a trial in Belfast Crown Court last January, a jury convicted him of voyeurism on 27 February 2014 when he secretly recorded a woman during a glamour photo in February 2014.

The jury heard the victim give evidence that McConnell came to her home for a photo shoot, some of which were “glamour”shots that exposed her cleavage and also parts of her breasts.

A year after posing for the images however, the cops told her they had uncovered a video of the shoot which McConnell has taken in secret.

She told the jury she had “no idea” the photoshoot was being recorded on a second camera, describing how “the only thing he had in his hand was the big professional camera.”

“As far as I was concerned, it was just still shots,” said the victim.

The footage shows the woman posing in a number of different tops, and also shows that each time she changes her top, McConnell leaves the room.

It was the Crown case however that McConnell secretly recorded the woman on a second camera for the purposes of sexual gratification.

Giving evidence on his own behalf, McConnell denied deliberately recording the unsuspecting woman during the photoshoot.

When asked if he derived any sexual gratification, McConnell claimed said he felt “no difference between photographing her and photographing an anthill.”

Despite his denials, the jury convicted him of voyeurism.

Judge Kerr had heard from prosecuting counsel Fiona O’Kane that offence was uncovered when one of the sisters reported to police that McConnell had taken “lots of images of her when she was approximately 15 and during the photo sessions, the defendant indecently touched her breasts,” adding that smiler allegations were made by the victim’s sister.

She revealed that when police were examining images taken and stored by McConnell, they also discovered an indecent video of children but told the court the defendant had been given a police caution for that earlier this year.

Lodging his plea in mitigation, Mr Turkington revealed that as well as working as a photographer for the police for 12 years during which time he recorded fatal car crashes and other crime scenes, McConnell has been a soldier for 26 years, rising to the rank of Quarter Master Sergeant, and was essentially deaf in one ear having been caught up in two bombings.

“He is a man who has served his community in a significant way,” said the lawyer who also conceded that given the nature of the offences, “there’s certainly a thread of taking advantage of younger and more impressionable people.”

Summing the case up, Judge Kerr said that “in essence, he took advantage…to further his own sexual proclivities” and that in relation to the abuse of the sisters, “it could be said that the offending had an element of grooming.”

He told the court it was conceded by the prosecution that the inappropriate touching “was at the lower end of the scale” for indecent assault.

Turning to aggravating factors, Judge Kerr said “there’s more than one victim, the offending was relayed over a protracted period of time and the defendant was abusing a professional relationship with the victims.”

The victims had filed impact statements and the judge said it was clear that McConnell’s offences has had “serious effects” on them.

While there were no motivating factors attached to the offences themselves, McConnell had entered guilty pleas to the offences against the sisters but that he “did so late” so was not entitled to full credit.

Judge Kerr said given his clear record and “history with the security services,” McConnell was entitled to a further discount of the sentence.

In addition to the probation order, Judge Kerr told McConnell he would be on the sex offenders register for the next five years and although the prosecution had asked him to also impose a Sexual Offences Prevention Order, he declined to do so.

The judge said given the background and protections already in place due to the probation order, he did not consider a SOPO to be necessary or proportionate.

Mrs O’Kane asked for a restraining order, revealing that after they reported the offences to the police, cards had been sent to them and “he has called at relatives houses” which they found intimidating.

Having heard that evidence, the judge said he had “absolutely no hesitation” in making a restraining order which bars McConnell from contacting his victims.