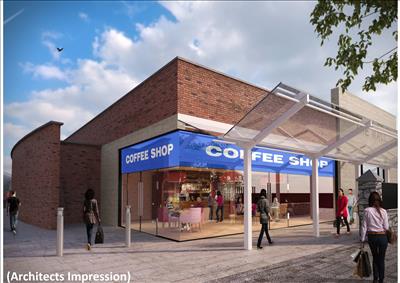 Speculation is mounting that the former Burger King outlet in Armagh could shortly be given a new lease of life as a leading brand coffee shop.

The unit has been sitting idle for the past number of years after the food retailer decided to pull out of Armagh.

There have been repeated attempts to let the former Burger King premises – which actually occupied two units in the Mall Shopping Centre – but to no avail.

But Armagh I understands that that could be about to change in the not too distant future.

The premises had been marketed by a Belfast-based estate agency as being in a “highly prominent position at the entrance of the centre”.

It was being advertised to potential tenants as “suitable for a number of retail uses but especially for a coffee shop as additional glazing can be provided”.

Plans have since submitted by Development Securities Ltd, the London-based real estate investor and developer which bought the Mall Shopping Centre. It acquired the premises from Drumragh Property Investments Ltd in April last year for a cool £7.4 million.

There had been no movement in relation to the vacant Burger King outlet – that is, until now!

Development Securities Ltd submitted plans through a Belfast-based agent, Malone Private Investments, for changes to the facades of the building.

The agent, according to its own website, “specialises in commercial and residential property development opportunities” and adds: “We source, acquire and develop specific property projects in prime city and suburban locations and use our knowledge and expertise in the industry to add significant capital value. “We undertake and structure joint ventures and co-investment opportunities with companies and high net worth individuals.”

The plans for alterations to the premises will go before Armagh City, Banbridge and Craigavon Borough Council’s planning and regulatory services committee when it sits in Banbridge on Wednesday.

And they will be recommended as an approval, given that the premises will not actually increase in size and will not detract from visual amenity.

The proposed changes show that the entire front of the old Burger King outlet will be glazed. And there are plans to create two new entrances. One would be located directly beside the main doors into the shopping centre from the McCrum’s Court side.

Another entrance would be located to the side of the centre, overlooking the car park, again with glazing replacing brick.

The official documentation relating to the plans indicates that the development would lead to the creation of four new jobs.

The application would suggest that changes are being made in preparation for the arrival of a new tenant, if not already agreed then certainly on the radar.