THere were 13 objection letters and a petition with 80 signatures 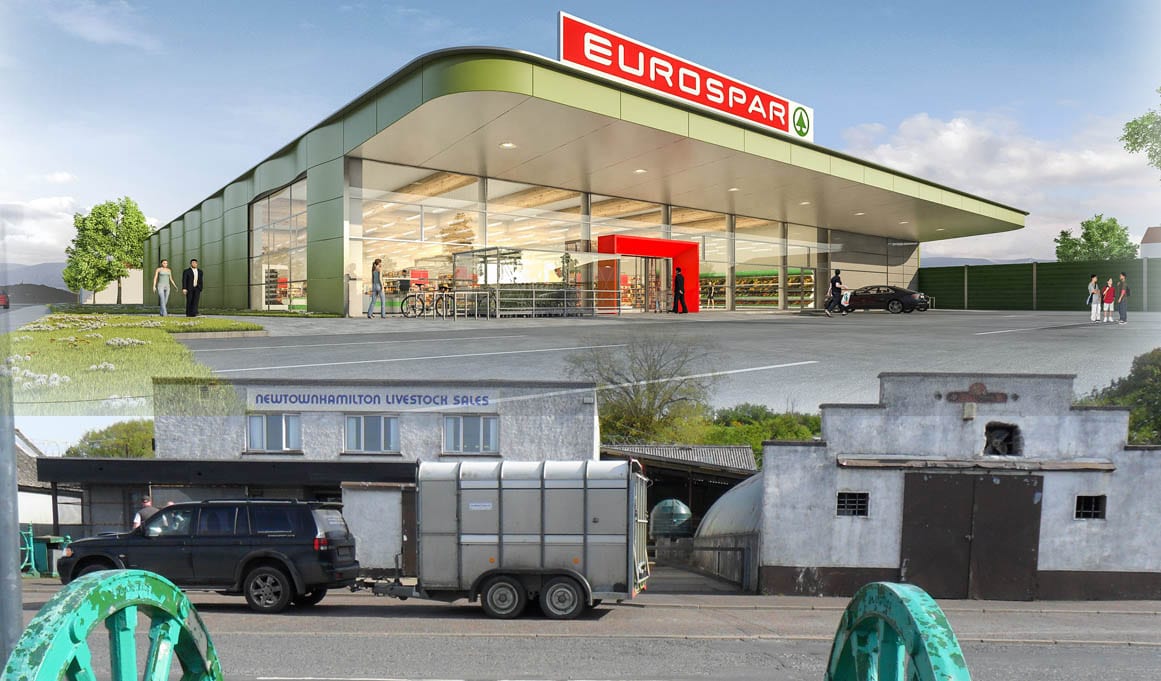 Controversial plans for a new Eurospar supermarket and filling station in south Armagh – costing in the region of £2.2 million – are to be recommended for approval later this month, Armagh I can reveal.

The development – which is expected to create 16 new jobs – will be located on the former livestock mart in Newtownhamilton.

The site at the Commons has been vacant since 2013.

But in December 2015, the Henderson Group set its sights on expanding its retail portfolio to include the south Armagh town.

Armagh I revealed at the time the proposals had been submitted to Newry, Mourne and Down District Council.

Officials have been working behind the scenes in considering the development which has been met with a mixed response.

Certainly, there has been consternation amongst some neighbours.

A total of 63 nearby properties were written to.

In all, 13 letters of objection – including a petition containing 80 signatures – were delivered to council planners in response.

But despite their vocal protests, a recommendation to approve the development will go before council when its planning committee sits on Wednesday, April 26.

Environmental health offered no objections on the proviso that opening is restricted to between the hours of 7am and 11pm daily.

There had been some concerns over access arrangements. But a meeting last June on site saw amendments made and Transport NI has now said it is “content” with what has been proposed.

The objections which were made against the supermarket and filling station plans cited planning policy, and the impact those opposed believe it will have on Newtownhamilton town centre.

Objectors quoted SPPS which states that “proposals for shops in villages and small settlements ought to be of a scale, nature and design appropriate to the character of the settlement”.

But the planning official’s report going to this month’s meeting will inform councillors that there is no need for a retail impact assessment and reject this reason for opposing the proposal.

It will state: “The proposal is located on a site within the designated town centre of Newtownhamilton which has been designated as an opportunity site under the extant Area Plan.

“The SPPS contains a sequential approach which identifies such sites as being the first choice for retail developments.

“While several objectors have requested that a full retail impact assessment be required for this proposal, the wording of the policy is that this is only necessary when the proposal is located within a village or small settlement.

“The Plan designates Newtownhamilton as being a town and the location of the site within the town centre means that a full retail impact assessment is not necessary.”

The new development would stretch to almost 7,000 sq feet of retail space. It will also incorporate an in-store butchery and deli, as well as newsagents and fresh flowers, home-made ice cream and coffee area.

The filling station will have petrol pumps located on four individual islands, capable of servicing eight cars at a time.

There will also be an ATM included at the premises, which will have more than the required level of parking, with a total of 71 spaces available on site.

The Henderson Group, which has brought forward the Newtownhamilton plans, is behind the Spar, Eurospar, Vivo, VivoXtra and Vivo Essentials brand names.

The final decision on whether or not to accept the recommendation to approve this outlet – which will be under the Eurospar umbrella – will, of course, rest with councillors later this month.