Co Armagh man raises over £3,000 to help Oisín get specialist treatment in USA 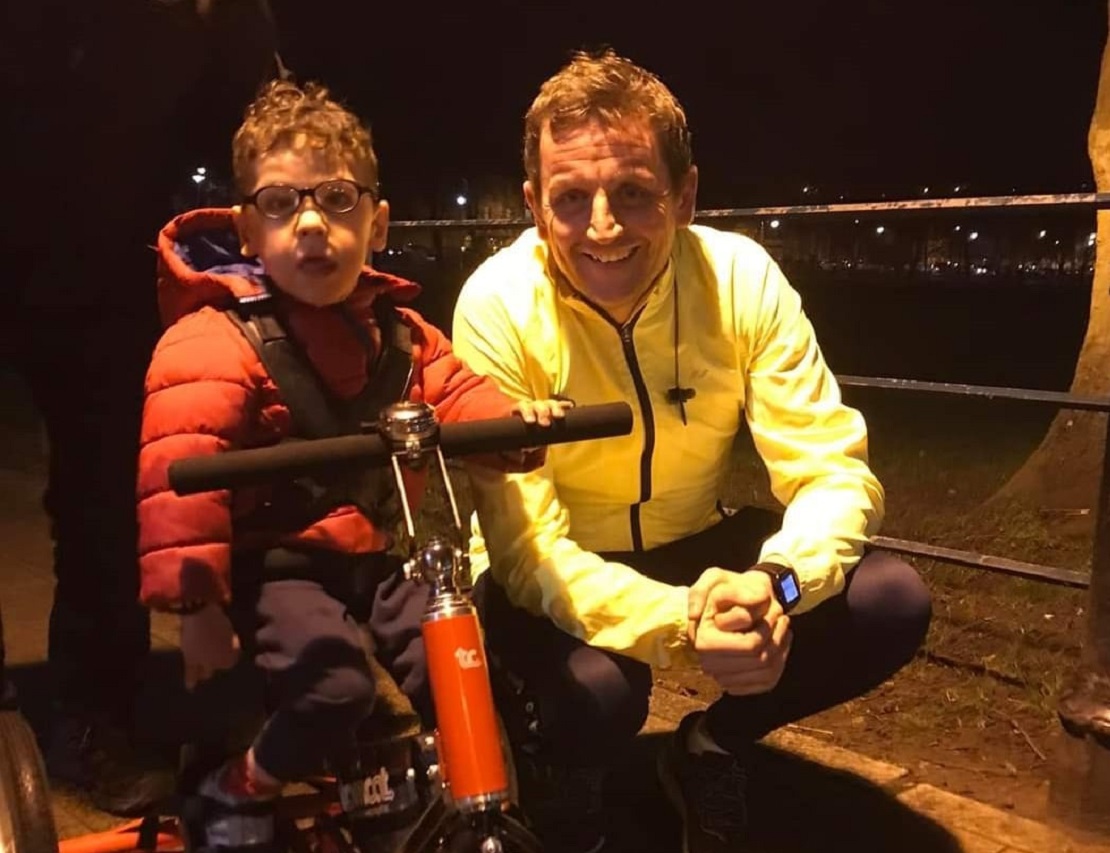 A Ballymacnab father-of-four has completed 5K a day for the month of January to raise money for a local boy, who suffers from quadriplegic cerebral palsy.

The money will enable little Oisin Traynor to travel to America for specialist treatments in a bid to help him reach his full potential.

Speaking to Armagh I earlier this month, Seanin Traynor, described her son Oisín as the “most sociable boy” with the “most infectious smile”.

At around two weeks old, a line delivering medicine displaced into Oisín’s abdomen which caused his oxygen levels and blood pressure to drop. This was not picked up for around 36 hours which meant that drains then had to be applied to remove the excess medication.

A scan, when Oisín was around six months old, showed that the cysts covered most of his brain and Seanin was told that it was unlikely he would be able to carry out simple tasks.

After researching cerebral palsy, Seanin found that the brain is like a sponge and early intervention, anything up to the first five years, was crucial.

They later set up Opening Oisín’s Opportunities which has raised around £30,000 from donations alone with a further £20,000 coming from people fundraising

The money raised has allowed the family to secure a place at the world renowned NAPA Centre in Boston for three weeks in March, something which previously seemed beyond reach.

One of those doing their bit in fundraising is Sean McArdle, who ran 5K every day in January to support the Opening Oisin’s Opportunities campaign.

Dad-of-four Sean, 38, told Armagh I: “Truthfully I wouldn’t have known him. I would kind of know the family but not greatly. Once you have children yourself, I mean I have a wee boy the same age as Oisin, you just count your blessings when you see the other issues that other families are having.

“I heard about them needing funds to go to Boston for treatment. I thought I should do something, just a small token to start them off, but I have now raised over £3,000.”

This is not the first time Sean has taken on this challenge, having previously completed 5K every day in a month back in 2018 with a group to raise funds for Katie Rose’s Journey.

However, a few years older he admitted this was a tougher task but was adamant he would fundraise again!

“I will probably go again but I need to give the legs a bit of a rest before I do anything else,” said Sean, “I am 39 this year. It wasn’t too bad but there were days in the snow and days in the rain, you know what the weather is like in this place.”

Sean also got the pleasure of meeting Oisin.

He said: “If you can’t get behind that wee lad there is something wrong. I have met him now. He is an amazing wee man. He joined us around the Mall two weeks ago with mother and father and he smiled the whole way around.”

To keep up with Oisín’s progress you can check out his Facebook page or to donate to Sean’s fundraiser visit his JustGiving page.