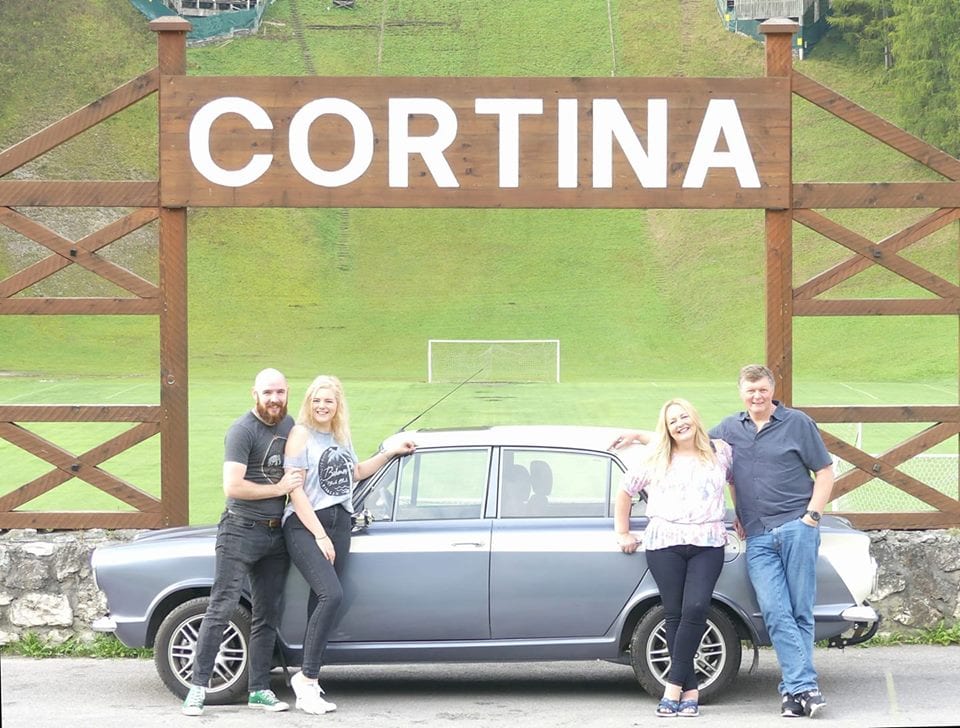 Mandy and Justin, and Jessica and Robert, after navigating 3,350 miles in their Cortina to Cortina road trip.

A Co Armagh family have completed an incredible road trip across Europe.

The Leyburns drove 3,350 miles from their home in Middletown, across 13 countries to arrive at their destination.

And that destination was Cortina D’Ampezzo in Italy.

For four years Robert Leyburn and his daughter, Mandy, have undertaken a labour of love to restore an MK1 Ford Cortina.

And what better way to celebrate the completion of their task than to test drive it all the way to Cortina D’Ampezzo – the Italian town after which the legendary 1964 car was named! Robert and Mandy took turns with the driving and they were accompanied on the epic journey by Mandy’s partner, Justin Gormley, and her mum Jessica.

It was the ultimate experience and video shows the family negotiate some hair-raising hairpin bends on the Stelvio Pass in Italy, sheer corners with drops hundreds of feet in what is the highest paved mountain pass in the Eastern Alps!

Mandy is delighted at having completed the never-to-be-forgotten road trip.

She and her dad Robert spent four years lovingly restoring the trusty Cortina.

But it took a wee bit longer than expected as she admits they began the work thinking it would be a “weekend project!”

“My dad and I shared the driving, and brought our trusty navigators along for the ride!

“The whole trip took two weeks and saw the Cortina turning heads everywhere from Lake Bled to Lake Garda, and even being photographed for a Parisian Model Agency!” Obviously the dad and daughter job on the car was a sterling piece of work!