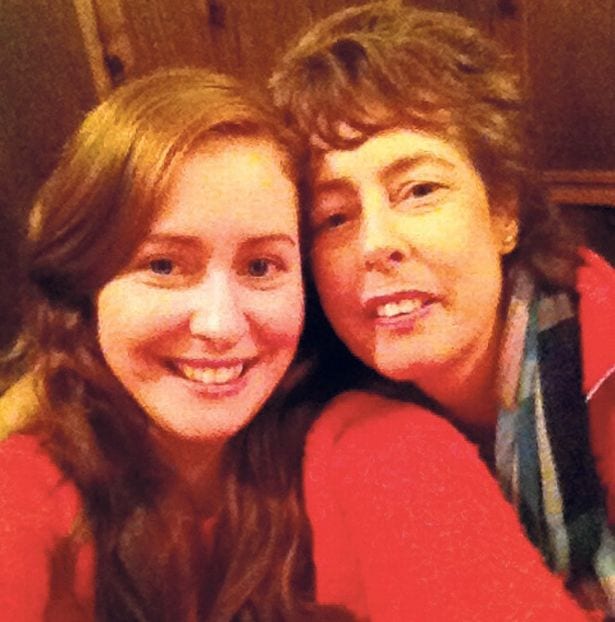 A young County Armagh woman – who lost her devoted mum to pancreatic cancer two years ago – is determined to continue the fight to raise awareness in the hope that other lives may be saved.

Grainne O’Neill, lost her mother Anne to the disease in January 2014.

And as it was revealed this week that only three per cent of GPs in the UK would be able to recognise pancreatic cancer, more and more efforts are being made to raise awareness.

The shock news that British music icon David Bowie had lost a secret 18-month battle with cancer was followed closely by the news that the much-loved Harry Potter actor Alan Rickman had also succumbed to the disease.

Grainne has expressed her sadness at the loss of the two much-loved stars. But she hopes that their passing will add an extra impetus in the awareness campaign and may help save others.

Pancreatic cancer is a disease that has just a one year relative survival rate of 20 percent. It does not discriminate.

And the survival rate statistics have not improved in 40 years.

Grainne insists that that must change.

Just last October, the brave young Armagh woman – who has raised tens of thousands of pounds for charities fighting pancreatic cancer – staged the first ever ‘Fight on for Annie Purple Gala Ball’, with the support of sister Sinead, brother Fergal and father Tom, at Belfast’s Europa Hotel.

She is determined to keep the campaign going and hopes that the loss of such icons of sound, stage and screen will make more and more people sit up and listen.

Speaking to the Belfast Telegraph, Grainne said: “It’s terrible to hear of anyone dying of this awful disease but, in a way, David Bowie and Alan Rickman dying of it – and Steve Jobs and Patrick Swayze – helps raise awareness, and that’s something that is priceless, because of the importance of early detection.

“Jamie Dornan has millions of fans and they have been so supportive since he posted a photo, with his dad, of him wearing our fundraising purple wristbands.

“I contacted him through Twitter and he was kind enough to do that for us. It’s funny, that’s the colour associated with pancreatic cancer awareness raising, and it was mum’s favourite colour.”

Grainne spoke to Armagh I at the time about why she is driven to do what she does.

“I never thought it would be a long-term thing,” she said. “We were initially shocked at how bad the statistics were for pancreatic cancer. There weren’t many survival stories, so I obviously became very passionate about it when my mum was first diagnosed.

“To lose your mum to a disease like that means it’s always going to be a massive part of my life. It took mummy from us way too soon.”

She added: “It’s quite bitter-sweet to do all this without her. I suppose it’s a way to help justify losing your mum so young.

“I really want to keep working on awareness and I’ll look to do one fundraising event a year, because you can’t expect people to keep giving money but awareness is just as important as fundraising. It’s as much about people hearing the stories, what it is, the symptoms, because that stuff is priceless.

“I really want to get a media campaign going, whether it’s through billboards or something like that, so people can learn. All the money raised is coming from here so I want the people here to benefit from it.”

She continued: “So many cancers have come a long way but pancreatic cancer is a very angry form of the disease. It’s just a death sentence and I think that it’s absolutely ridiculous, with the era we are in, that the statistics haven’t change in 40 years.

“I think it’s seen as a lost cause because it’s going to take so much time and money that nobody is willing to put that in, governments aren’t willing and that’s the hard bit. People don’t really care until it’s at your doorstep, but by that stage it’s too late.

“If I could help save one person’s life, some mother’s life, it’s all worth it. To see people join in and support our events, people that haven’t necessarily been personally affected, then you know you’re doing something right. It’s amazing to see that and we can’t thank people enough.”

The need to continue is underlined after the publication of results from a survey commissioned by charity Pancreatic Cancer Action, which revealed just three per cent of GPs asked said they felt fully confident and informed about the symptoms of pancreatic cancer, and the difficulty in recognising these was deemed to be the main barrier to diagnosing patients early.

But the results also reveal that challenges remain for GPs having access to diagnostic tests. When questioned about the ease of access to CT scans, only 29% said it was relatively easy.

Pancreatic cancer is the UK’s fifth biggest cancer killer with a survival rate of just 4%.

The majority of pancreatic cancer patients are being diagnosed at a late stage of the disease, often in A & E, so the survey was carried out to establish what issues GPs may be facing in diagnosing pancreatic cancer.

Commenting on the survey results, Ali Stunt, chief executive at Pancreatic Cancer Action, said: “It’s interesting to see how many GPs do not feel confident about the symptoms of pancreatic cancer yet are aware that this is the main barrier to diagnosis. However, as the figures show, doctors feel that patients also need to be more aware of the symptoms and present themselves early to support earlier diagnosis.

“With access to diagnostic tests also an issue; there are clearly many barriers that still need to be overcome to ensure patients are diagnosed at the earliest stage, and in time for life-saving surgery.”

The survey revealed that 90% of doctors believe pancreatic cancer to be a “silent killer” despite there being a number of clear symptoms that have now been included in NICE’s referral guidelines for pancreatic cancer.

Ali continued: “Early diagnosis is vital to improving the survival statistics for pancreatic cancer. While no early detection test exists, more awareness of the signs and symptoms of pancreatic cancer will have the greatest impact on saving lives.

“The results from the survey suggest that more work is needed to educate GPs and the public on identifying the symptoms of pancreatic cancer, and to highlight that pancreatic cancer can be symptomatic in the early stages.”

Only 4% of those surveyed had taken it. This is available here:https://pancreaticcanceraction.org/about/what-we-do/provide-medical-information/pancreatic-cancer-learning-modules/

For further information on pancreatic cancer and its symptoms, visit www.pancreaticanceraction.org
400 GPs across the UK took part in this survey carried out by Research Now in October 2015