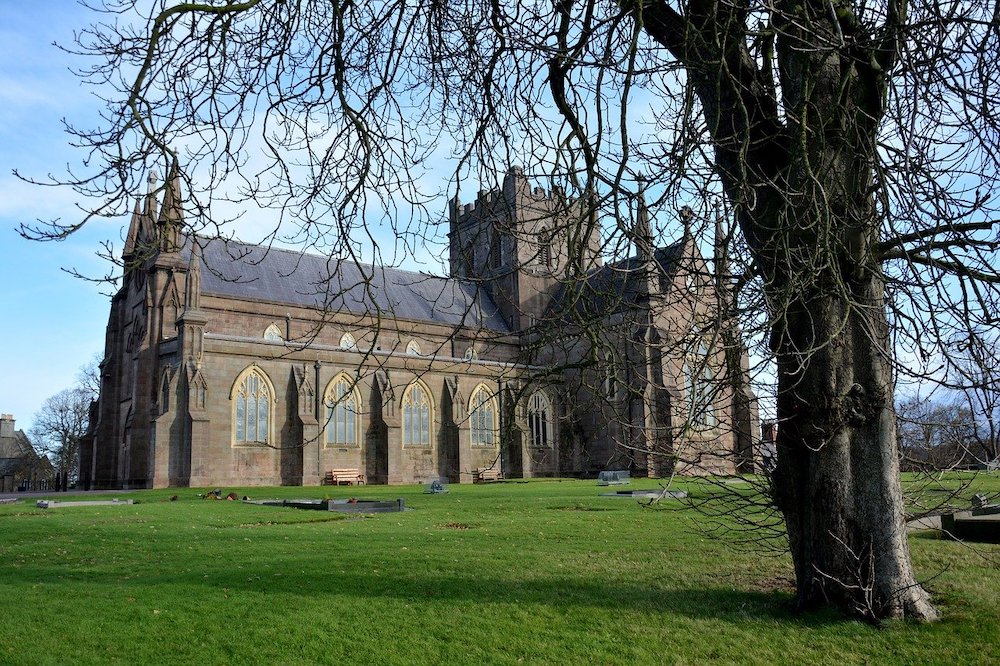 All eyes were on Armagh on Thursday morning as a unique gathering was held to mark a deeply significant time in the history of these islands.

The simple symbolic act took place during a Service of Reflection and Hope to mark the centenary of the partition of Ireland and the formation of Northern Ireland, which had been organised and hosted by the Church Leaders’ Group (Ireland).

The hour-long service, which began at 11 o’clock in Ireland’s ecclesiastical capital, was attended by representatives of both governments and the Northern Ireland Executive and other elected representatives. The Queen had been due to attend but was forced to cancel her plans.

Children carried a lantern symbolising the light of hope through the Cathedral, and joined the Centenary prayer for the gift of understanding, peace and hope for the next generation. pic.twitter.com/eXS2ifBPv8

While guests at the Service have had to be limited to enable appropriate social distancing, due to various Covid-19 mitigations, the service also brough together civic dignitaries, children and young people, and over 100 community leaders working in peace-building, community development, health, youth work, and various different aspects of church life, in an act of worship underpinned by a Christian vision of reconciliation.

The P7 children from local maintained, controlled and integrated schools accompanied Billy Smith, from City of Armagh High School, bearing the lantern, which had a living flame burning within, through the Cathedral to the Sanctuary, where they presented it to the Church Leaders. Throughout the service, children and young people had key roles to play.

With local schoolchildren forming a welcoming reception for the guests as they entered the Cathedral grounds, a choir of children from different backgrounds from the local area – in brightly coloured T-shirts to represent diversity and hope across the island – sang a ‘Song of Hope’ entitled, ‘We’re the future of tomorrow’.

Leaders from the Catholic, Church of Ireland & Presbyterian churches offered reflections during the service, as did the President of the Irish Council of Churches. The congregation also heard a sermon delivered by the President of the Methodist Church in Ireland pic.twitter.com/VLDr9pVlL0

In a part of the service, called ‘Voices of Hope’, three young people, Lucy Addis from the Royal School Armagh, Seán McCourt Kelly from St Patrick’s High School in Keady, and Andrea Andrews, from Le Chéile Secondary School in Tyrrelstown in Dublin, each shared their hopes, dreams and aspirations for the next generation.

Two of the three scripture readings (Isaiah 40:28b-31 and Matthew 5:1-14) were read by Rebecca Morris, from Belfast’s Methodist College, and Oisín Walsh, who works in the Catholic Communications Office in Maynooth.

An ‘Act of Commitment’ was led by Rosa McCloskey from Lagan College in Belfast and James Chamberlain, from Markethill High School.

During this morning’s service of Reflection and Hope, the congregation heard a children’s choir sing the song of hope, ‘We’re the Future of Tomorrow,’ and young people describing the hopes, dreams and aspirations of the next generation. pic.twitter.com/u6Oi8Q1vdQ

Broadcast live by the BBC and RTÉ, at the start of the Service of Reflection and Hope, the Dean of Armagh, Very Rev Shane Forster, welcomed guests and led the service in prayer.

Having read 2 Corinthians 5:17-29, he prayer“…Lord, we confess to you and to each other, that we have wounded each other and our communities in the past. We are sorry and ashamed and ask for your forgiveness, so that together we may move forward in faith, grow together in love, and faithfully serve you all our days…May Almighty God forgive us, heal us and help us and give us his peace now and in the days to come, through Jesus Christ our Lord. Amen.”

Prayer also formed an integral part of the service. Linda Ervine MBE and Seán Coll, led the opening prayer in Irish. Professor May Hannon-Fletcher and Robert Barfoot, who were both injured in the conflict on this island, offered Intercessions. The Sierra Leone-born President of the Methodist Church in Ireland, Rev Dr Sahr Yambasu, gave the sermon.

He told those present they were there to “mark a point in our history”.

And he added: “We have come a long way – not just a century but centuries. During that time people have cared for one another and made efforts to build community.  For this we give thanks. But we have also been blighted by sectarian divisions, terrible injustices, destructive violence, and by win-lose political attitudes. And for this, we have cause to lament.

Secretary of State @brandonlewis & Minister of State @ConorBurnsUK were greeted by church leaders at the Service of Reflection and Hope at St Patrick’s Church of Ireland Cathedral, Armagh. The service marks the Centenary of the partition of Ireland& formation of Northern Ireland. pic.twitter.com/svXsD0eKft

“So, this service provides us with an opportunity to give thanks and, also, lament; to imagine what could be, and to choose the way forward that can be mutually beneficial.

“It was only recently that I learnt that the first antislavery voice out of Ireland is that of Patrick.  Patrick’s letter to the powerful chief Coroticus was an anguished cry for the equal rights of every person to a life of dignity, worth, and respect. Patrick saw no future for reconciliation without such justice.

“My friends, human rights abuses start with seeing other people as things, rather than as human beings like ourselves. Once we cross that line, we can treat them as obstacles to get rid of, or as merchandise to sell for profit, or as bargaining chips to barter, or as tools to use for our benefit.

“Born and raised in Sierra Leone – on the continent of Africa – I speak as one whose people were bought, sold, and used for profit; whose continent was partitioned without any reference to or consultation with its inhabitants and owners; and whose colour is seen as sufficient excuse to ignore their equal humanity with others.

“Consequently, I have spent the last 26 years on this island negotiating my acceptance as of equal value with Irish people.

“In standing against slavery and the violence to human dignity it represents, Patrick leaves us with a legacy of including others in our humanity, regardless of who they are. That is what Paul’s text on reconciliation in 2Corinthians is about. Reconciliation refuses to see people through any other lens other than how God sees them – as made in His image. That is why Paul says that ‘From now on, we regard no one from a worldly perspective’. (2Cor.5:16) And this from a man who confessed that, before he was a Christian, he was extremely zealous for the traditions of his fathers and won’t tolerate others who were different. (Galatians 1:14)

“My friends, how we see others is important. There is a short story in Mark’s Gospel of Jesus healing a blind man by rubbing saliva on his eyes. The first time Jesus does this, he asks the man to tell him the result. ‘I see people, but they look like trees walking’, the man says to Jesus. (Mark 8:24) Jesus repeats his action on the man’s eyes. And then the man sees clearly – that is, he sees people as people.

“I bring you good news! By the grace of Jesus, we can see and treat different others as people like ourselves. Hope for a better future must be rooted in that possibility.”

Before Dr Yambasu preached, his four colleagues in the Church Leaders’ Group (Ireland), the Most Rev John McDowell and the Most Rev Eamon Martin, Church of Ireland and Roman Catholic Archbishops of Armagh and Primates of All Ireland respectively, Rt Rev Dr David Bruce, Moderator of the Presbyterian Church in Ireland, and Very Rev Dr Ivan Patterson, President of the Irish Council of Churches, shared some personal reflections. In a moment entitled ‘The Journey’, these reflections included some of the significant themes that have touched them in relation to this centenary year.

Music also played an important part in this Christian act of worship. Along with the children’s ‘Song of Hope’, soloist Helena Hendron and the Cathedral Choir, under Director of Music, Dr Stephen Timpany, sang ‘The Deer’s Cry, during a ‘Time of Reflection’. Three hymns were also sung, accompanied by Assistant Organist, Rev Dr Peter Thompson, and musicians from the Education Authority Music Service. The Cathedral Choir also sing an Irish Blessing.

Speaking in advance of the Service, the Church Leaders said, “We would like to extend our thanks to the Dean and Chapter of Saint Patrick’s Cathedral, Armagh, for the use of the Cathedral for our Service of Reflection and Hope, and everyone who has come today and will participate in it. We see this service as a moment in a much longer journey towards reconciliation, which will require the prayerful support and engagement of Christians across these islands.”

The Church Leaders continued, “In our ‘Centenary Prayer’, which is printed in the Order of Service, we acknowledge before God, our failures, our divisions, and the hurt that we have caused Him and one another. For this, we ask for forgiveness.

“The prayer concludes, ‘As we travel onwards in our journey, may we learn from the experiences of the past and from those who trod these roads before us, so that the inheritance we pass on to the next generation is the gift of understanding, peace, and hope. In faith we pray, and humbly ask, in the name of Him who is the light of the world and giver of all hope, Jesus Christ our Lord. Amen.’ May all of us on this island have the courage to embrace and pass on these gifts.”