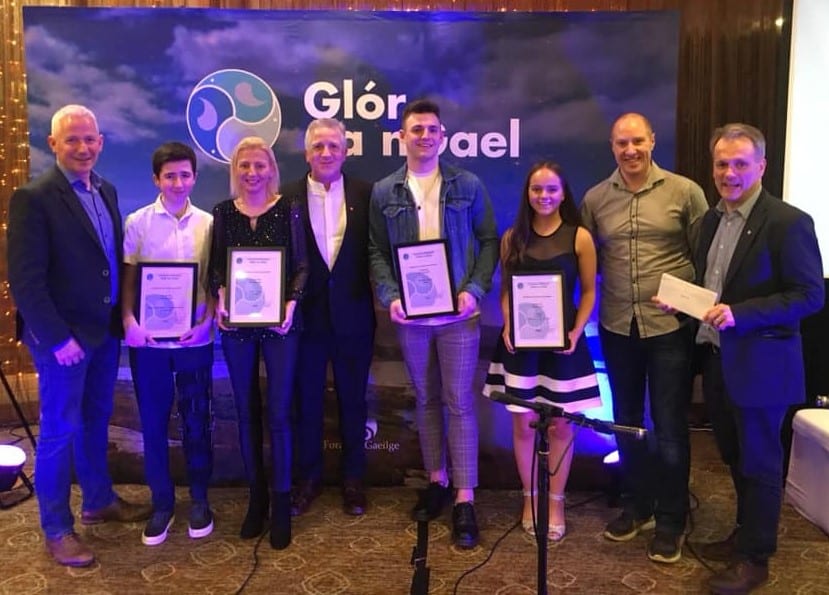 CAIRDE Teo representatives are certainly no strangers to awards ceremonies.

And now the Armagh City group’s hard working staff and volunteers have again been recognised for their efforts at the luxurious Glasson House Hotel & Country Club in Co. Westmeath last week.

The innovative cultural enterprise scooped an unprecedented four awards at this year’s ceremony. Beating off stiff competition from community organisations across Ireland, CAIRDE Teo gained multiple recognition at the prestigious awards for a sixth consecutive year.

The annual Glór na nGael awards are presented to Irish language organisations in recognition of their efforts to promote the indigenous language in local communities across Ireland. A total prize fund of €80,000 was awarded to community groups and 3rd Level College societies.

CAIRDE Teo took 1st prize in the category for urban areas with populations of less than 20,000.  The group were also awarded the Comhairle na Gaelscolaíochta prize for their promotion of Irish medium education in Armagh and also ‘Duais an Timire’ for their work in promoting good relations among people of different faith backgrounds.

The group were called to the stage on a fourth occasion to receive ‘An Duais Ógras’ for their energetic work in coordinating youth work and providing recreational activities for young people through the medium of Irish.

Thanks to CAIRDE Teo, Armagh’s Irish speaking community have a wide range of services on offer to them, including community enterprise training, media programmes, evening classes, residentials, youth clubs, summer schemes, cross-cultural initiatives, healthy lifestyle projects and a busy calendar of social events throughout the year.

Áislann Rann na Feirste in the Donegal Gaeltacht won the top prize: the Glór na nGael Trophy, sponsored by Foras na Gaeilge, and a €20,000 cheque sponsored by the Department of Culture, Heritage and the Gaeltacht. Other key awards were presented to the Carn Tóchair, Co. Derry and Glór na Móna in Belfast.

A special award, Gradam Ghlór na nGael, was presented to brothers Séamus and Seán Mac Seáin. The two were born in Belfast and each, in their own ways, have made significant contributions to the Irish language in Belfast and further afield.

Irish Language Development officer with CAIRDE Teo, Seán Ó Maoilsté praised the organisers of the recent awards ceremony, saying: “It was a great honour to represent Armagh City and to meet so many Irish language activists from the four corners of Ireland at the prestigious awards ceremony in Glasson Country House Hotel at the weekend.

“Receiving an award for our Irish language work for the sixth year in a row is a welcome recognition of the hard work put in by our staff and volunteers all year round to provide a comprehensive range of bilingual services to all sections of the local community. The organisers of the awards ceremony, Glór na nGael, certainly pulled out all the stops in terms of glitz and glamour. It’s a night we’ll never forget.”