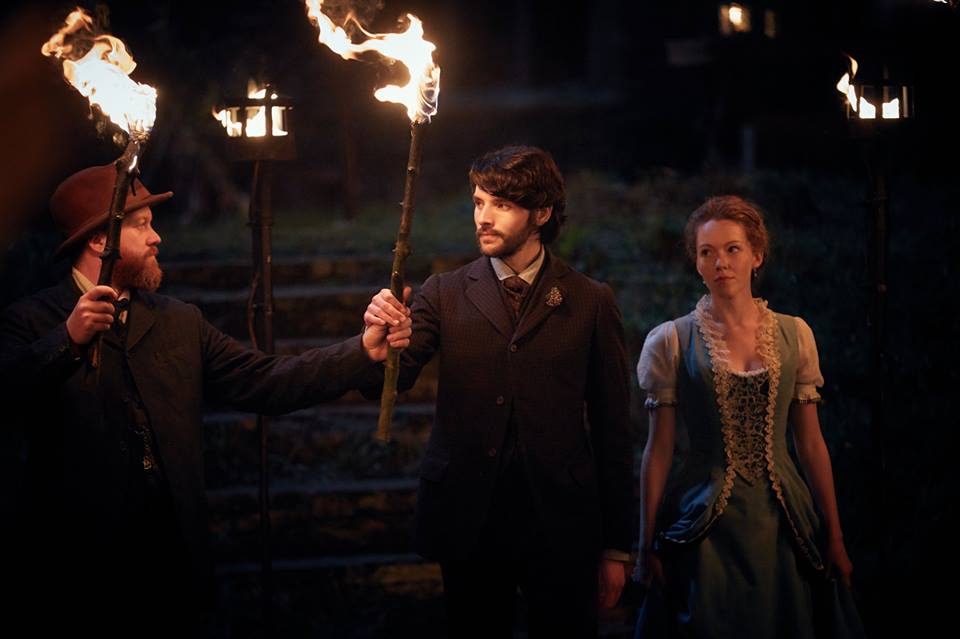 Armagh actor Colin Morgan returns to our screens this month in the chilling supernatural drama ‘The Living and the Dead’ – and you’ll want to go to sleep with the lights on afterwards!

Excitement has been mounting ahead of the six-part show, which will actually premiere for the first time ever as a complete box set on BBC iPlayer before being screened.

Colin, who shot to fame as Merlin in the BBC series of the same name, plays Nathan Appleby, a pioneering Victorian psychologist, with Charlotte Spencer as his vivacious young wife.

Set in Somerset in 1894, they are brought back to the family estate after the death of Nathan’s mother, and he is soon faced with one disturbing case after another. Many of his troubled patients come to him as a result of that Victorian obsession with death and the afterlife, damaged by mesmerism, mediums, Ouija boards, automatic writing.

Nathan is a man of science and believes that everything has a rational explanation.

Story by story, episode by episode, his belief in science is undermined and finally shattered: one of the children on the farm is haunted by the ghosts of mining boys who died a generation ago; a haunted mill; a murder victim; a demonic visitation from Civil War ghosts.

As summer moves through harvest to autumn and then winter, the stories get darker and nastier, until the entire community is involved and threatened…

The Living and the Dead was written by Ashley Pharoah, who also brought us Ashes to Ashes and Life on Mars, so you know you are in for something different – and something very unique and special.

Colin explains: “It’s a show that I feel we haven’t quite seen before. The Living And The Dead is a blend of horror, love, supernatural, relationships, life, death, losses, grievances, joy.”

The Armachian – who will also appear in the third series of The Fall and second series of Humans this year – describes his latest character as a “man who has suffered and been through a lot”.

Says Colin: “He is adamant that he is going to solve his problems, be that through people, through his work as a psychologist or, as he ends up doing, confronting himself by moving to the house that he grew up in. “He’s not only coming back to inherit the estate, he is reawakening everything that is related to it. The relationship between Nathan and Charlotte is very much the centre of the drama – it’s the heart and soul of it.

“They are two people desperately in love and desperately looking for happiness. They can’t possibly comprehend what they are about to take on, or what is going to take on them.

“What awaits them in Shepzoy, the house that Nathan grew up in, is a cask of the unknown and a fair amount of horror, which is both dramatic and difficult for them to overcome. But essentially it’s a story about a couple whose relationship is put to the test.

“He has been educated his whole life to believe that aspects of the supernatural are aspects of the mind, they are delusions that can be very much explained scientifically. To start to see things that challenge that belief is very, very unsettling for him. Nathan begins to experience things both through the locals and himself that put him to the test and force him to really tread the line between the scientific and the supernatural.

“When more and more people are coming to him, and he starts experiencing things himself, he becomes enraptured in the world, very obsessed and very internal.

“It digs up his demons and one of them is his dead son Gabriel.“

Colin describes it as a “dark series” and a “very challenging but fun shoot”.

“It was very creative and collaborative,” he adds. “We were lucky to be working with such fantastic scripts, which were genuinely very engaging to read. The joy of getting to do projects that are close to your heart and that you feel very passionate and driven about is that when you are on the set filming, you do catch yourself thinking, ‘We’re actually doing it‘.”

The Living and the Dead is available on BBC iPlayer from this Friday, June 17, and the first episode of the six-part series will be broadcast on Tuesday, June 28, at 9pm.